I’ve now been maintaining my sourdough starter for nearly three months. It’s going well. After the initial failure to produce edible bread with this starter, I have baked a batch of successful breads every weekend, which has generally covered our family’s weekly bread consumption. In between bakings, I have experimented with ways to use the leftover starter that is removed twice a day when the starter is fed (for more on this process, see here).

In the past, I’ve made pancakes from the left-over starter, which worked really well. I tried that again and it was still great. I find (though Paulus disagrees) that when you use sourdough starter in the batter, you can substitute water for milk and still retain the soft texture.

A new addition to my repertoire is sourdough crackers. I’ve made them twice so far, and they are very good. Both times, I loosely followed this recipe, but I suspect you can get away with adding the starter to your favorite recipe for crackers, if you adjust flour/water content accordingly and use a longer proofing/resting time.

Another new addition is… bread! When we’re running low on bread, or if we need a particular bread-type thing for dinner, I’ve taken to use the starter like yeast to bake bread on shorter notice. So far, I’ve successfully done this (well, except that I forgot the salt every time …) with pita breads, rolls that we used as burger buns, and pizza dough. All I do is mix the “discarded” starter with flour, water, and, ideally, salt, in a big bowl in the morning when I’m feeding the starter, and then I leave the dough on the kitchen table throughout the day. When I return from work, it has risen beautifully and is ready to be shaped and baked. Next, I’m going to experiment with more kneading (compared to none at the moment) to see if that improves the texture of the bread. I might even try to use the stand-mixer for this.

I also really want to try making waffles, but we don’t have a waffle iron, and it seems a bit excessive to buy one just for one experiment. Especially with us not being big on sweet breakfast or dessert (though truth be told, I’m less opposed to these things than I was before becoming pregnant with Storm). And I am definitely going to try adding starter to homemade pasta. Lots of fun challenges ahead. 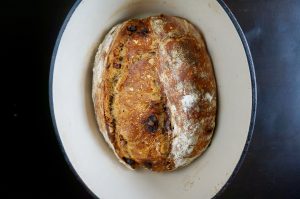