We got off to an intense start of Storm’s third month of life, as he got his 2-month immunizations. The actual administration of the shots was a breeze, he didn’t even notice the first one, and only cried for a moment after the next ones, and all was forgotten by the time I could nurse him right after. We congratulated ourselves on our good luck with this procedure, and even went out to lunch with Storm in tow on the way home. The doctor had told us that he might be a bit fussy after the shots. Ha! Come afternoon, Storm started crying as he never had before, save that one time in the car on the way home from the passport appointment. Completely inconsolable for hours, despite being constantly in the arms of one of us, being rocked, too upset even to nurse. When rocking, walking, singing, the starfish, and ice packs on his thighs all failed, I sent Paulus to the pharmacy to get some baby aspirin in a moment of desperation. Of course, Storm calmed down before he returned, and was even able to once again appreciate the starfish. So the baby aspirin was stashed away for another time. 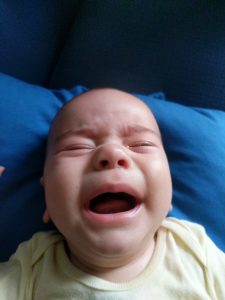 Some days are easier than others…

It does not look, however, like our boy caught any autism from the vaccinations. He has been developing normally since then, anyway. In particular, he has started making eye contact, lots of it, and he has been smiling so much that we now take it for granted. Nah, scratch that, his smiles continue to be the most wondrous thing to witness, and they never fail to make me smile and laugh in return. 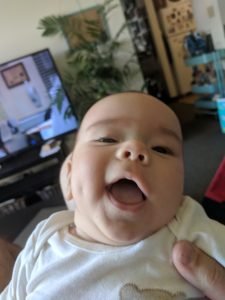 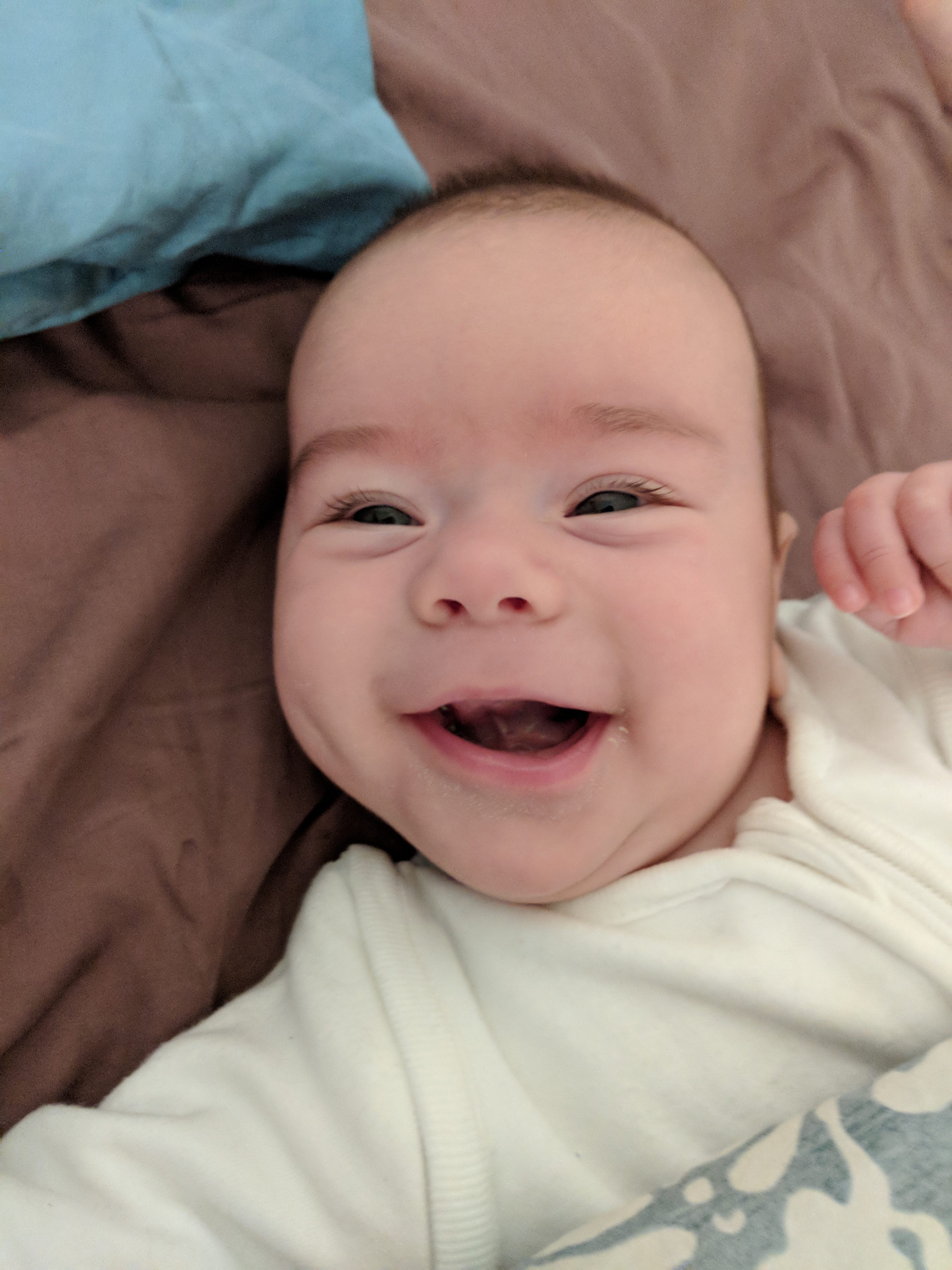 When smiles turned to laughter, it was equally wonderful, and it has made songs, tickles, and silly sounds so much fun.

For the first couple of weeks after he really started smiling, however, the majority of the smiles were still bestowed on the starfish, the lucky bastard, who doesn’t even have to work for it, like we do. Nor for the cooing, for that matter. Storm started cooing quite a lot, so his morning meeting with the starfish has turned into a long cooed narrative, presumably about all that happened in the night.

The third wonder week/developmental leap was supposed to happen around week 12. One of the things that this leap supposedly brings about is the ability to grab things. By week 11, Storm had not displayed any attempts hand coordination or grabbing. And while I was excitedly waiting for him to ‘discover’ his hands, this didn’t really happen as a big momentous change. This was the height of the hand amazement so far:

But if gazing at his hands are not Storm’s favorite pastime, sucking on them is, at least based on the frequency with which he does it. He is now an expert in bringing one hand, most often the right one, to his mouth and selecting different parts of hit to suck on. Vigorously.

By week 12, he had started randomly stretching out his arms towards things, but still without seeming to realize what he was doing. 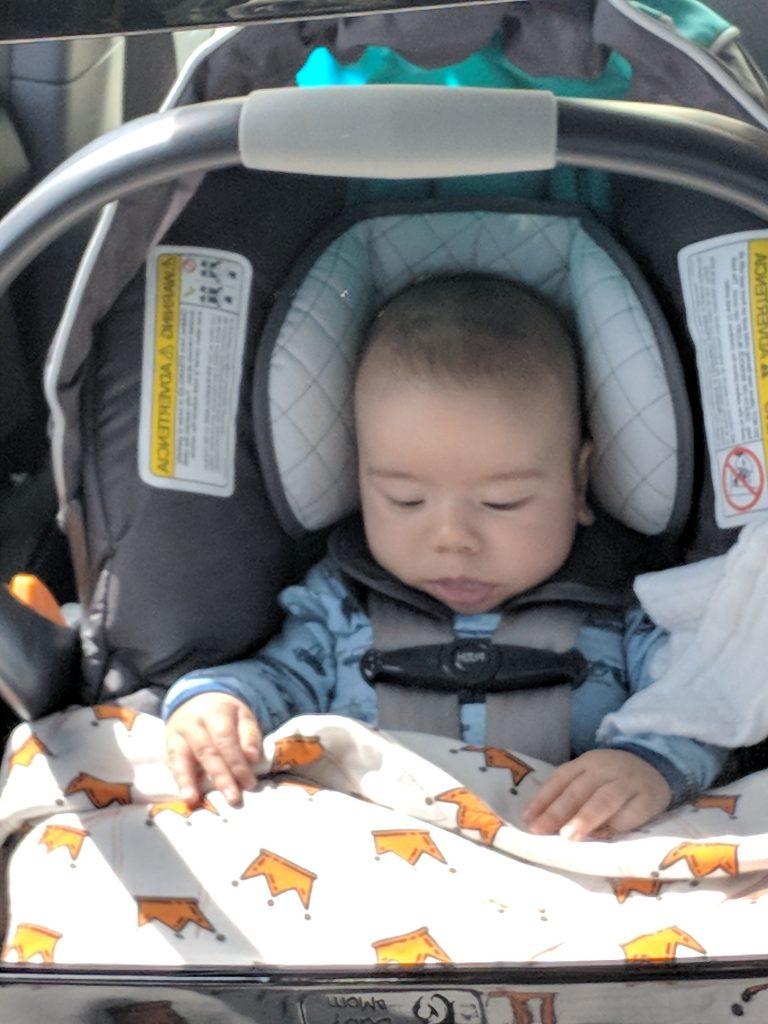 Grabbing the blanket passes the time when we’re driving

And he got really good at it. Play on the play mat now mostly involves ignoring the hanging toys and focusing on pushing around the arch itself.

As I’m writing this, at 3 months and almost 2 weeks, Storm definitely grabs things, but not yet with clear intention. Even so, he seems to be enjoying play time more than before, and most days he has been content to play with (meaning look at) his toys alone for 10 -15 minutes at a time. 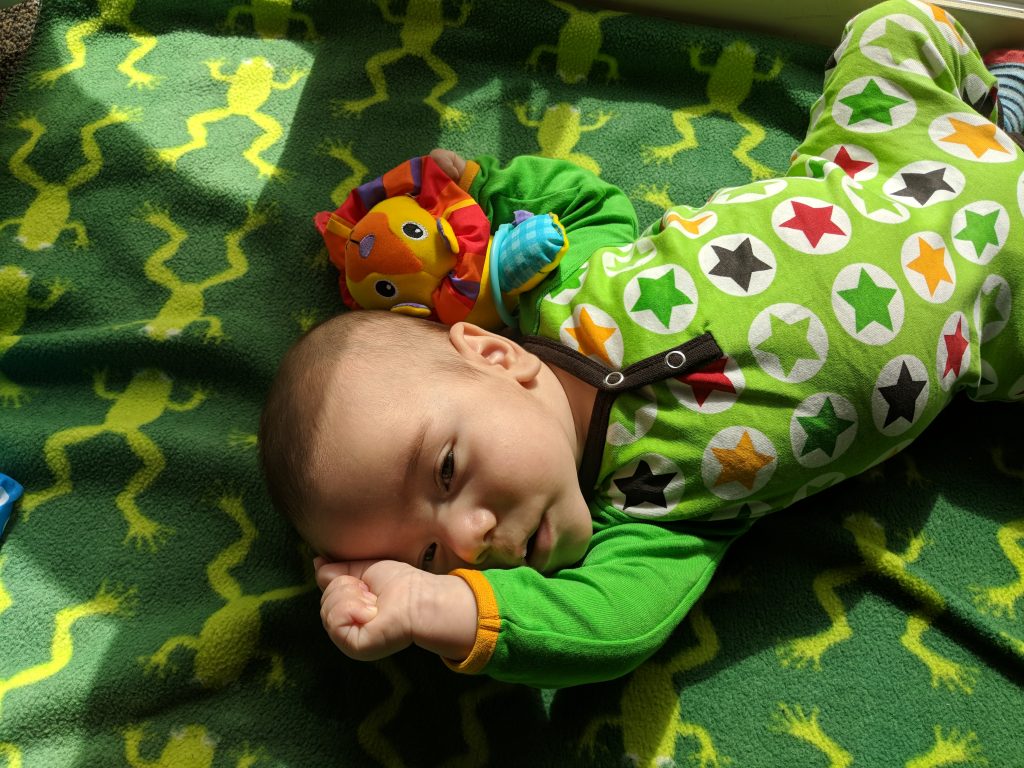 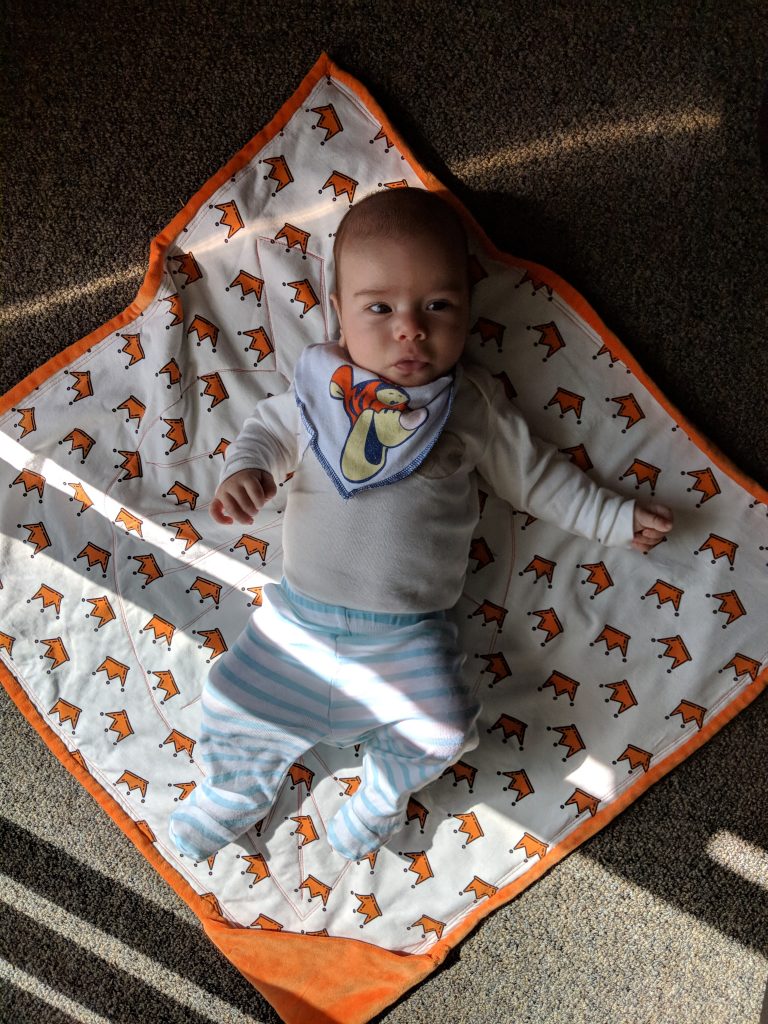 Tummy time is still not a favorite, even though he’s doing it so well. 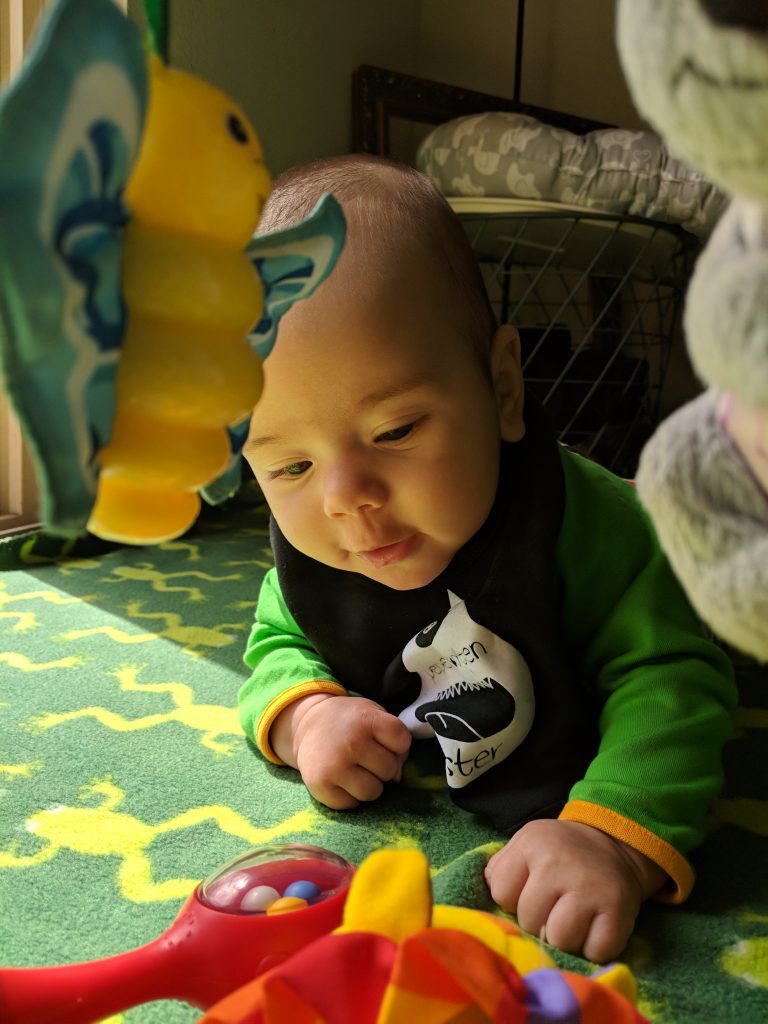 Very shortly after his two month birthday, he started rolling over from tummy to back. For about two weeks, he would do so at every chance, and then, for no apparent reason, he stopped. I suspect that as he got stronger, his balance got better and he wouldn’t roll over by accident. So now we’re waiting for him to do it deliberately. 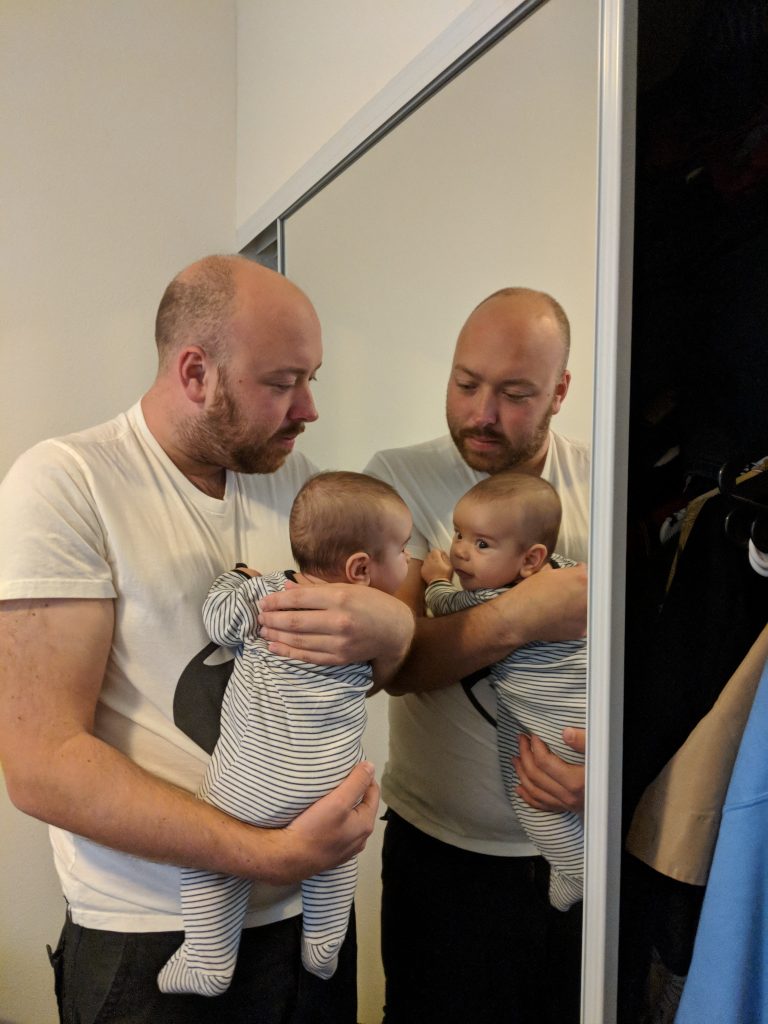 And he outgrew his stroller bassinet along with so many of his clothes! Must be the Dutch blood… We packed away the bassinet and started using the cat seat instead, or the stroller seat, with an infant insert support thing, because although his head/neck control has improved a lot, he still needs some support to avoid tilting sideways. 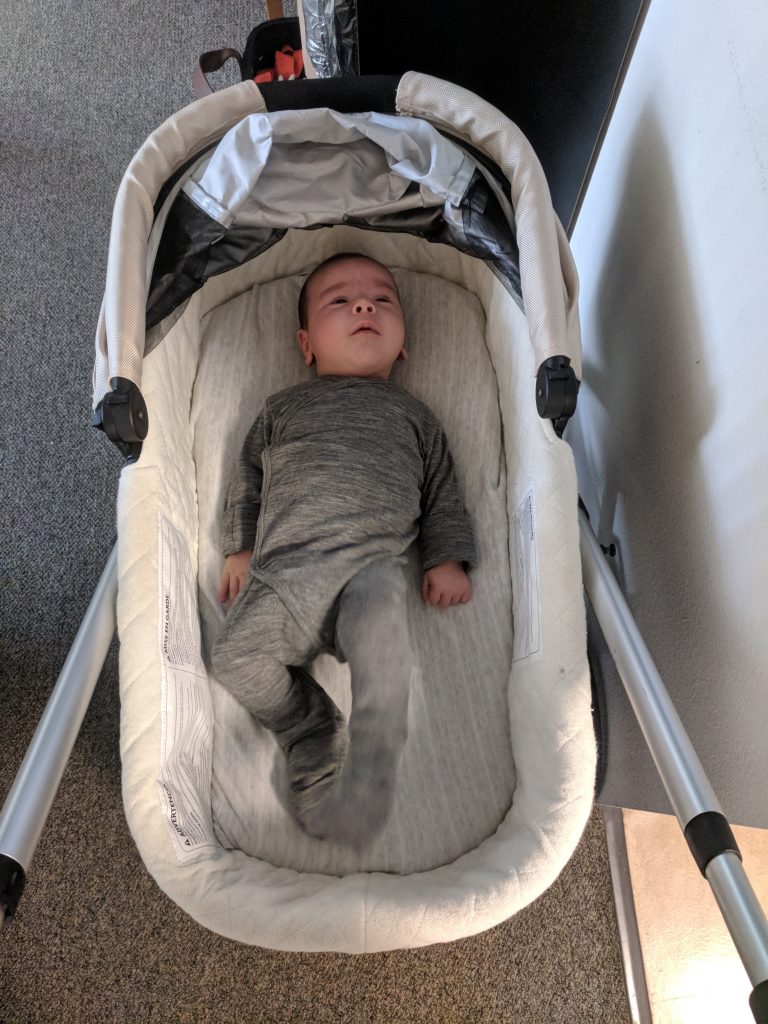 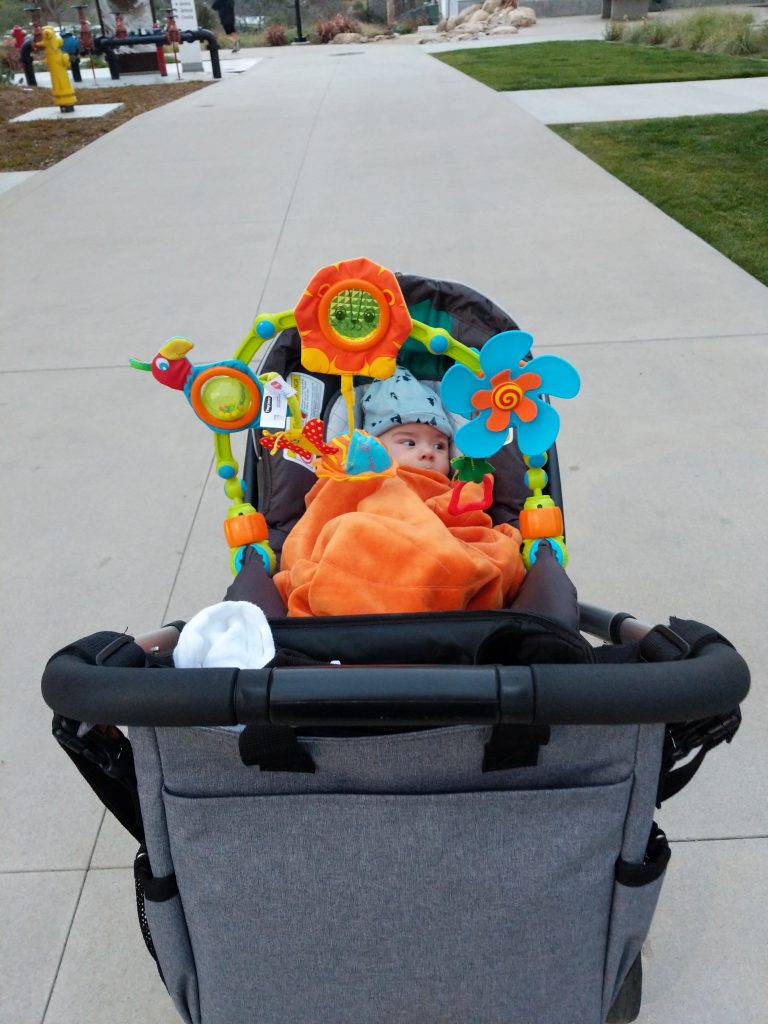 Cold day in the stroller 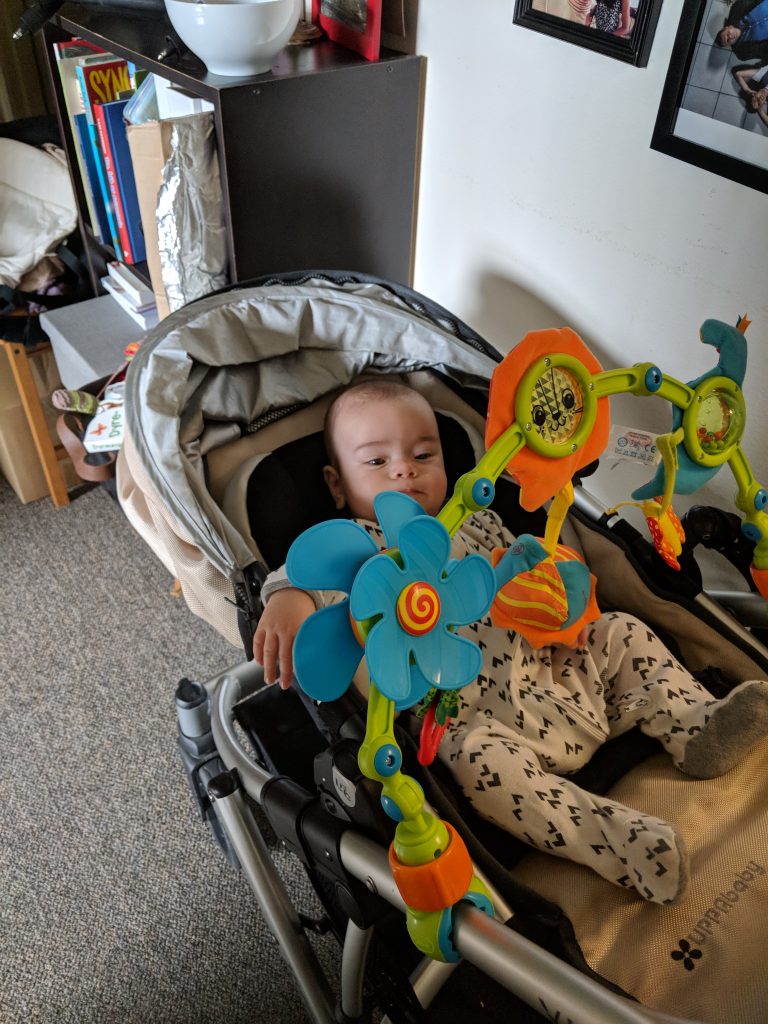 Upgraded to the big boy seat

I wish that I could write sentences that would do justice to just how fantastic it feels to have Storm near. Having him in our arms or in the carrier lets us give him so many kisses on his soft cheeks and warm little head, and it is quite simply the best thing ever. 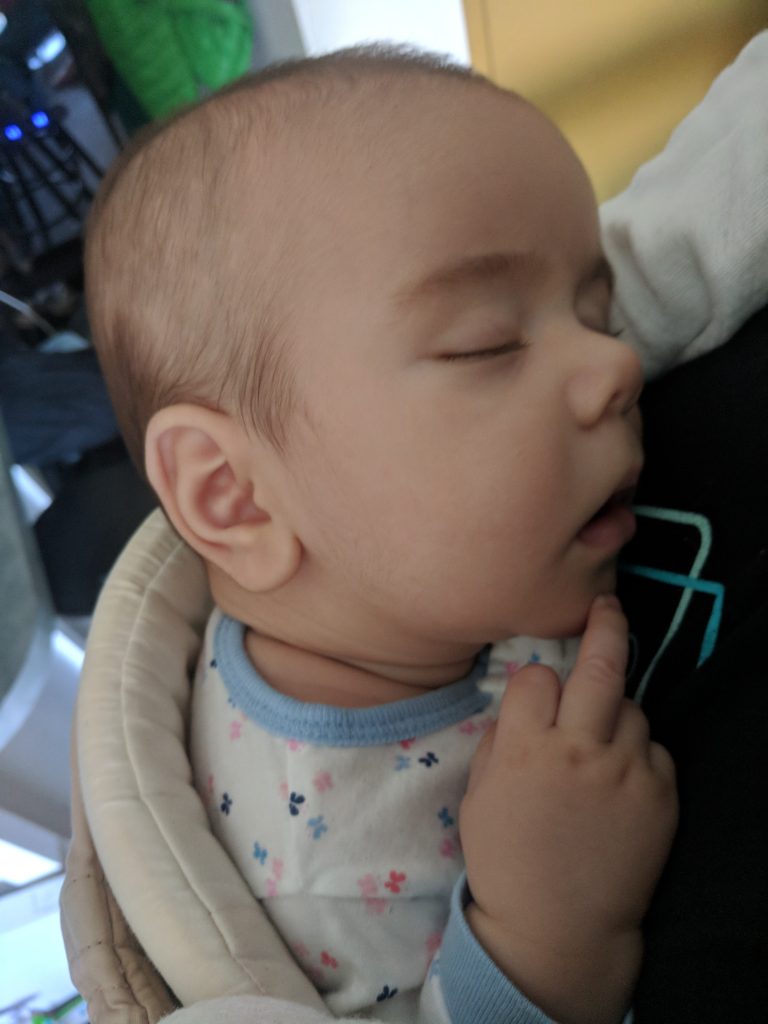 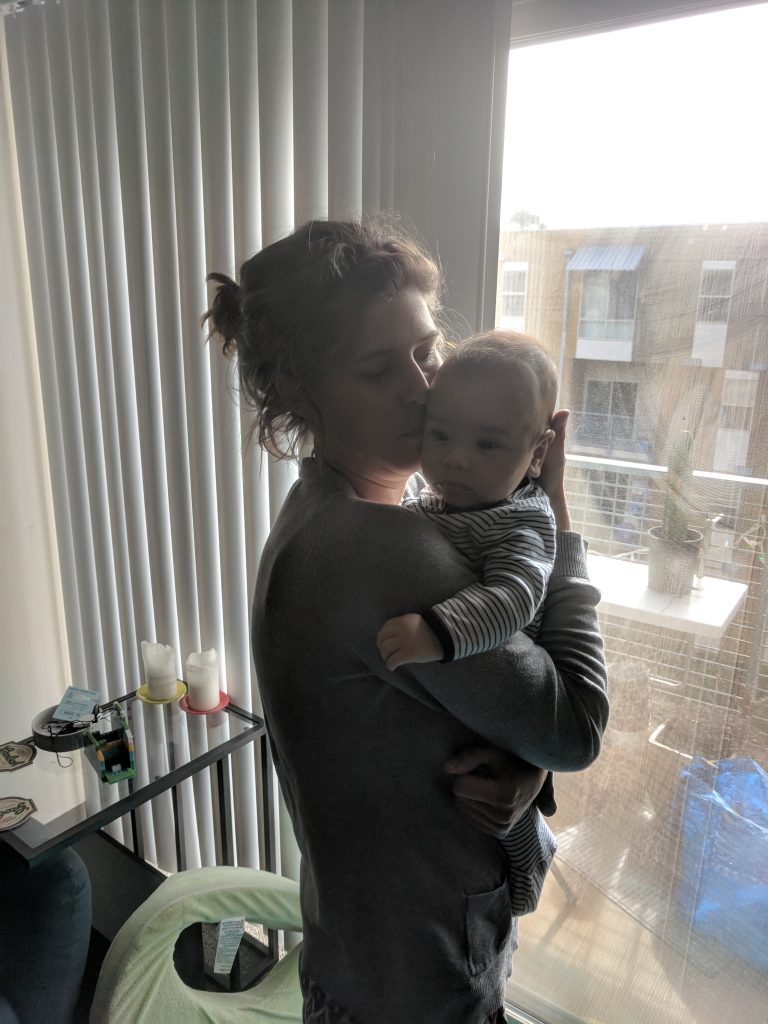 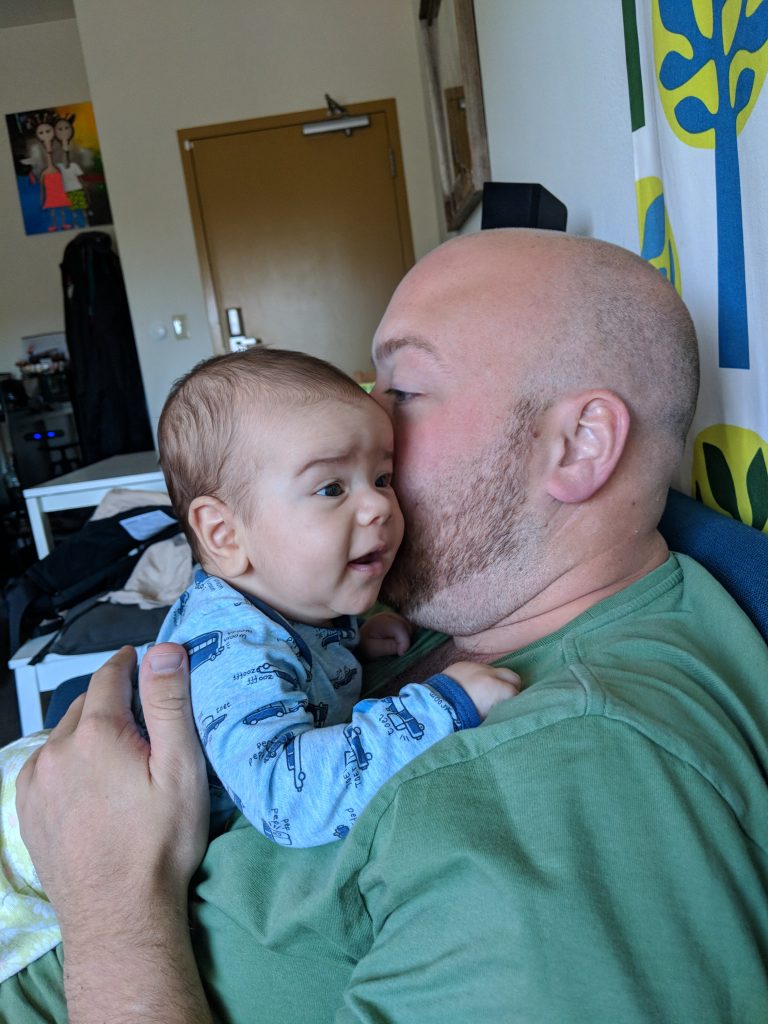 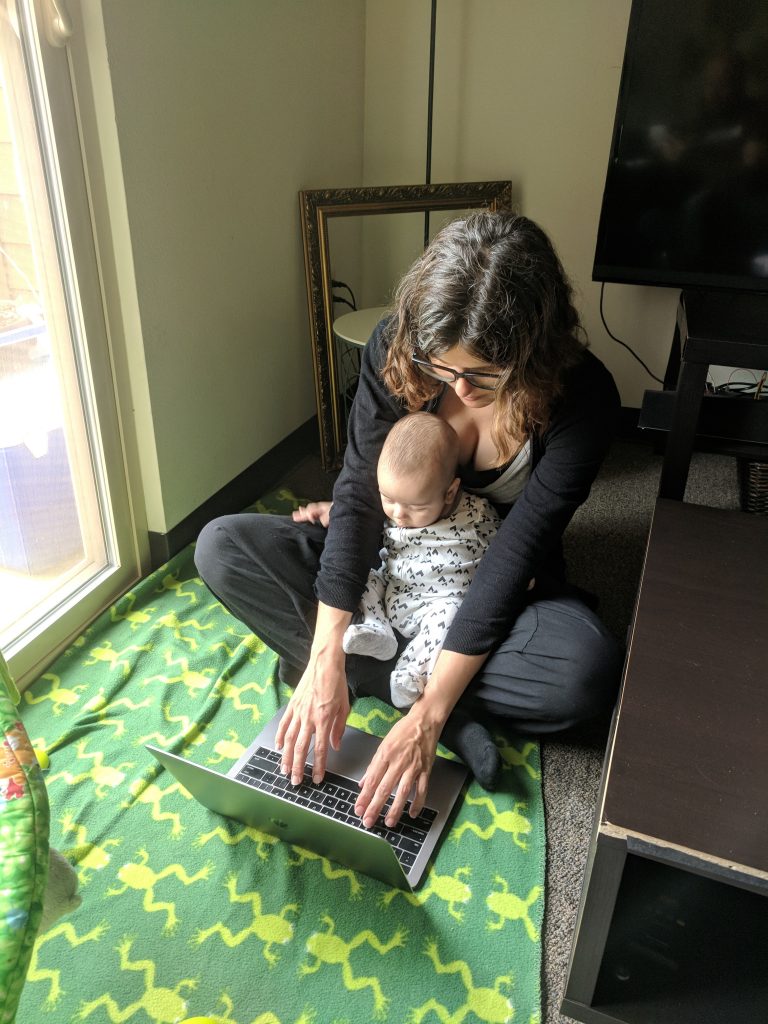 But of course, we also have to leave Storm time to pose in all of his amazing outfits, most of which were gifted to us by generous friends and family. 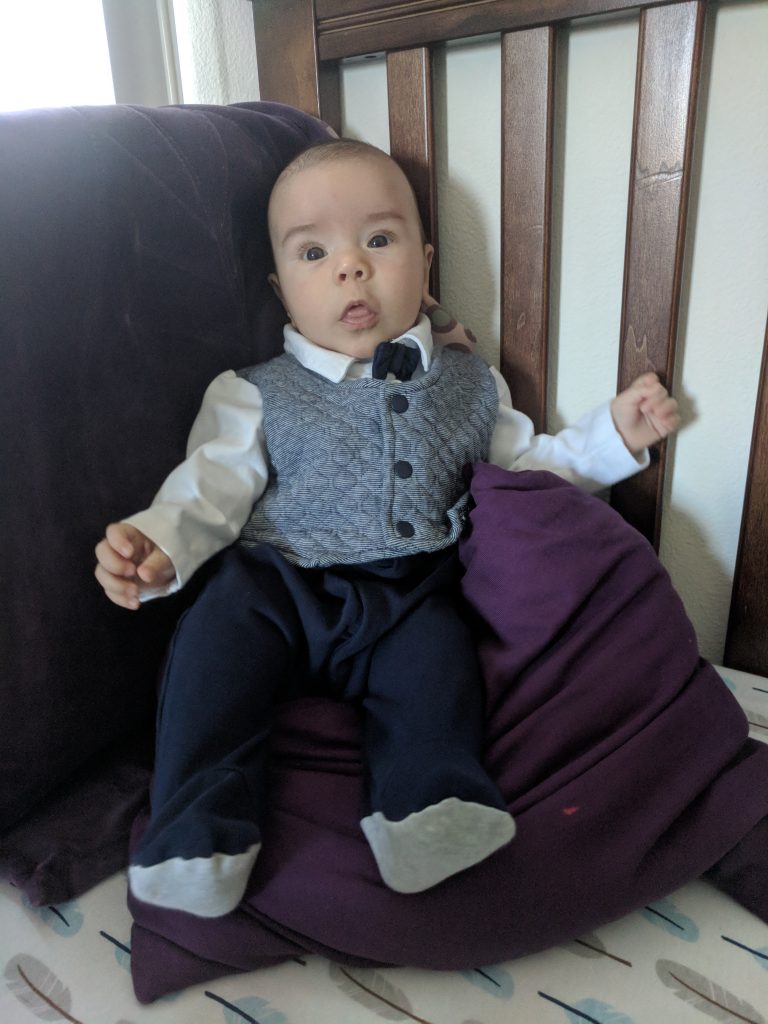 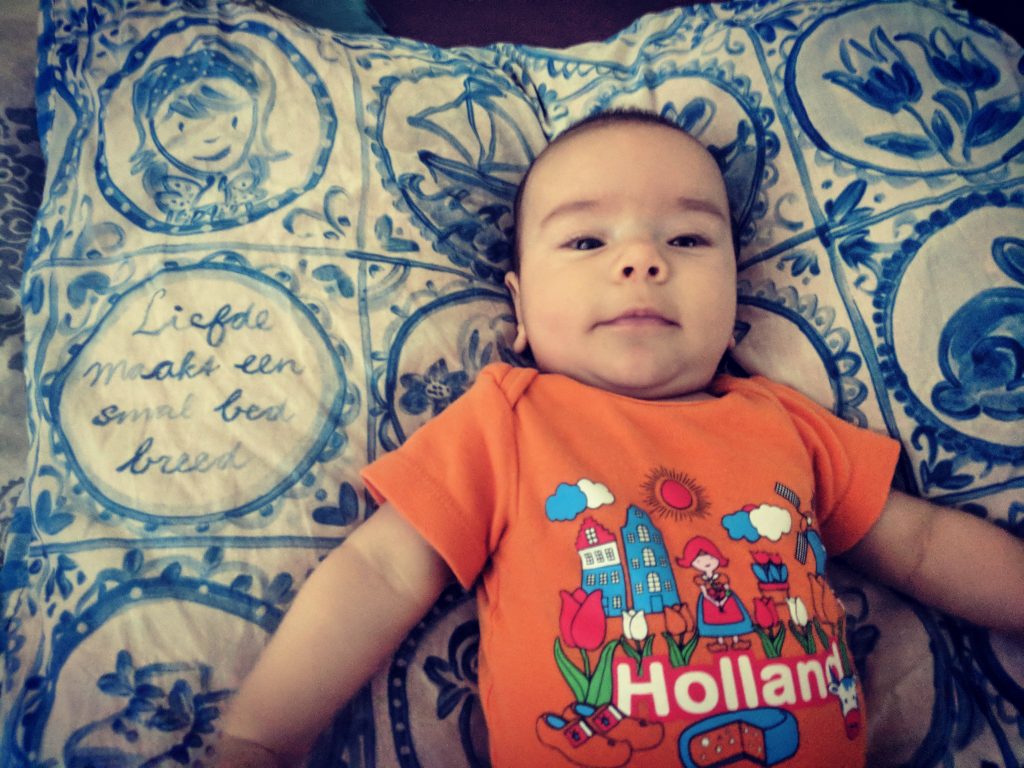 A proper patriot surrounded by Dutchness 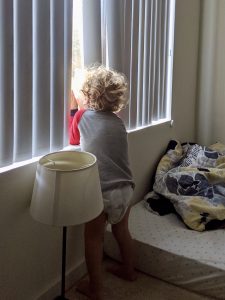 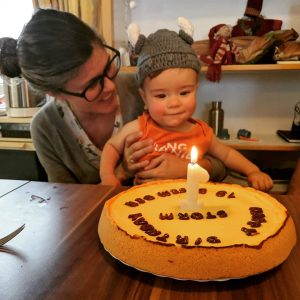