Today’s post features a lemon, kale and meatball soup. The post should have happened a while ago, because that is when I actually made the soup. But because I made a ‘cheat’-version with pre-made meatballs, I kept thinking that I would make the post when I had actually followed the recipe. Three months later it looks like that is not going to happen anytime soon. But I wouldn’t want to deprive anyone of this recipe, because it was actually very good. And while it uses a winter vegetable (kale), it’s a light and bright soup that might come in handy as a break from the heavier foods of the holidays.

I chanced upon this recipe one of the times I was looking for an inspiring way to cook kale. It’s a chicken broth with meatballs, braised lemon slices and kale, but I have already imagined the first half dozen ways to make variations on this soup. The recipe calls itself a braise, but I thought it should be more like a soup so I upped the quantity of chicken stock. Here’s the basic idea: First you make the meatballs, or in my case, defrost some precooked Swedish meatballs that you bought at Ikea. Cook shallot and lemon slices, then add meatballs and chicken stock and let it simmer. Finally, add the kale and cook until it is tender. Garnish with green onion and serve.

The result is a satisfying, warm, but not heavy meal. The main impression it makes is one of lemony chicken broth, but with a slight bitterness from the lemon skin that matches the kale very well. You could make endless variations of this dish if you added fish sauce, ginger, hoisin sauce, basil, parmesan, peas, bacon, parsley or a million other things, really. Or you could make it vegetarian with chickpeas, falafel or tofu. Basically what I’m saying is that you should make this soup, whoever you are. 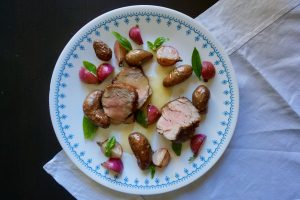 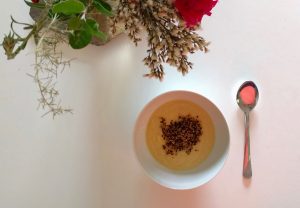 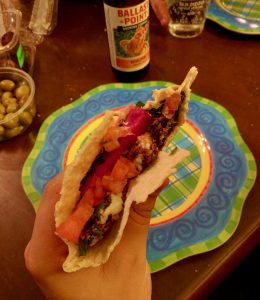