I’m not the world’s most outgoing person. So when I manage to attend and/or host a bunch of dinners in the span of a few short weeks, I’ve really extended myself.

Nonetheless, this happened in the first few weeks of October. Apart from the Bread Feast, we had a number of other wonderful dinners.

In our group of friends, we have the tradition of the ‘Wednesday Dinner’. It’s generally a potluck, but sometimes someone steps up and prepares a special dish for everyone. Since there are people from many different cultural and culinary backgrounds, this is always a treat. In October, there were two such dinners.

There was the Lebanese & Greek Dinner. So much goodness.

Paulus enjoyed a snack of bread and cheese, along with a good old America beer (I wonder if it will be weird to read this in a few weeks after the presidential election…). 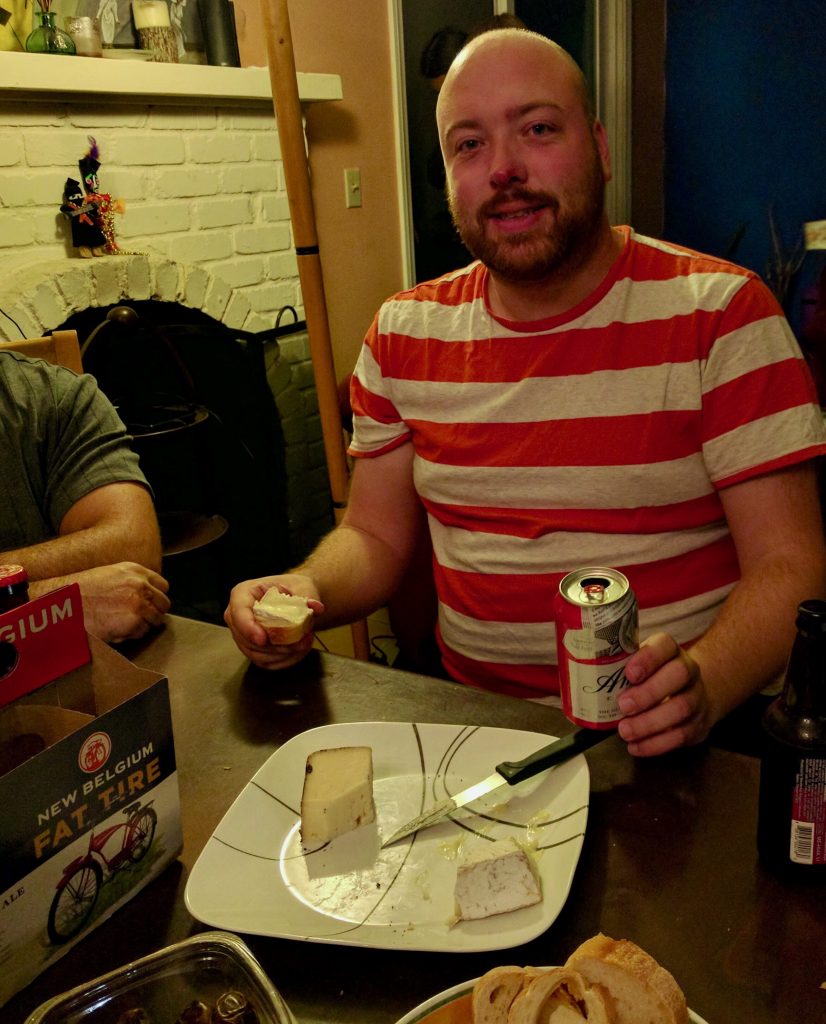 Meanwhile food was being prepared by busy hands. 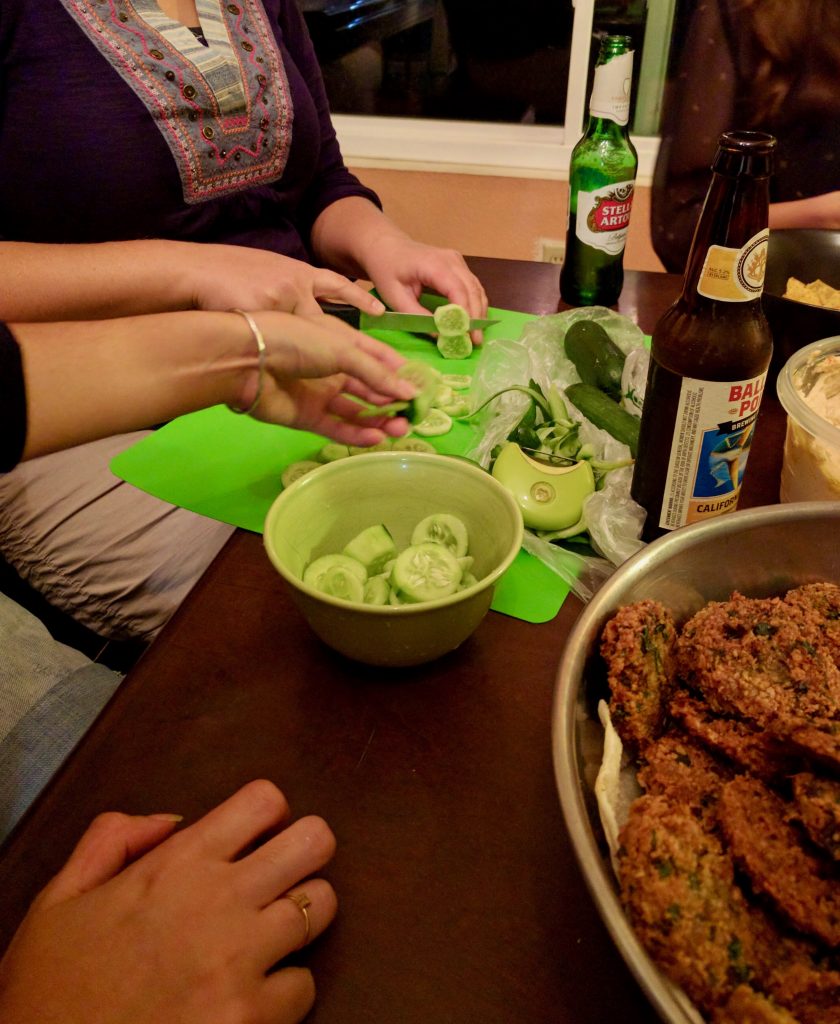 We had some delicious falafel. It turns out that the Lebanese Arabic pronunciation of ‘falafel’ sounds pretty much exactly like in thickest Copenhagen accent you can imagine. Crazy. 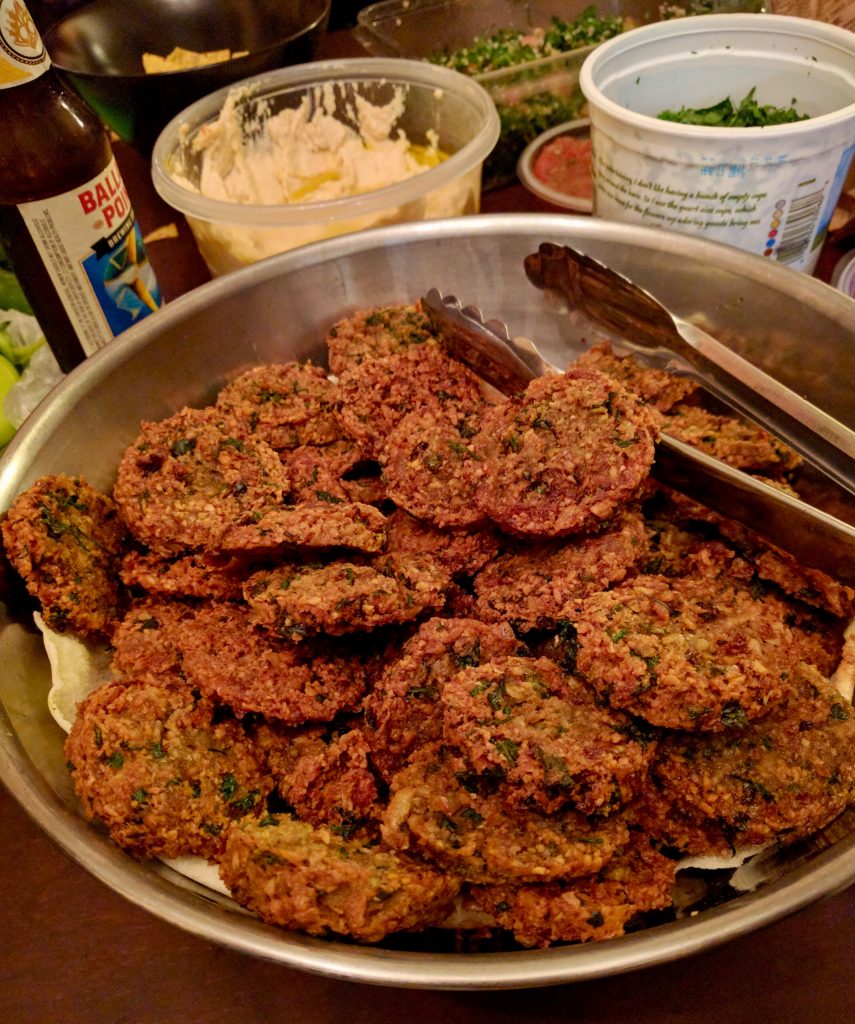 They got stuffed into pitas along with cucumbers, tomatoes, herbs and tahini dressing. 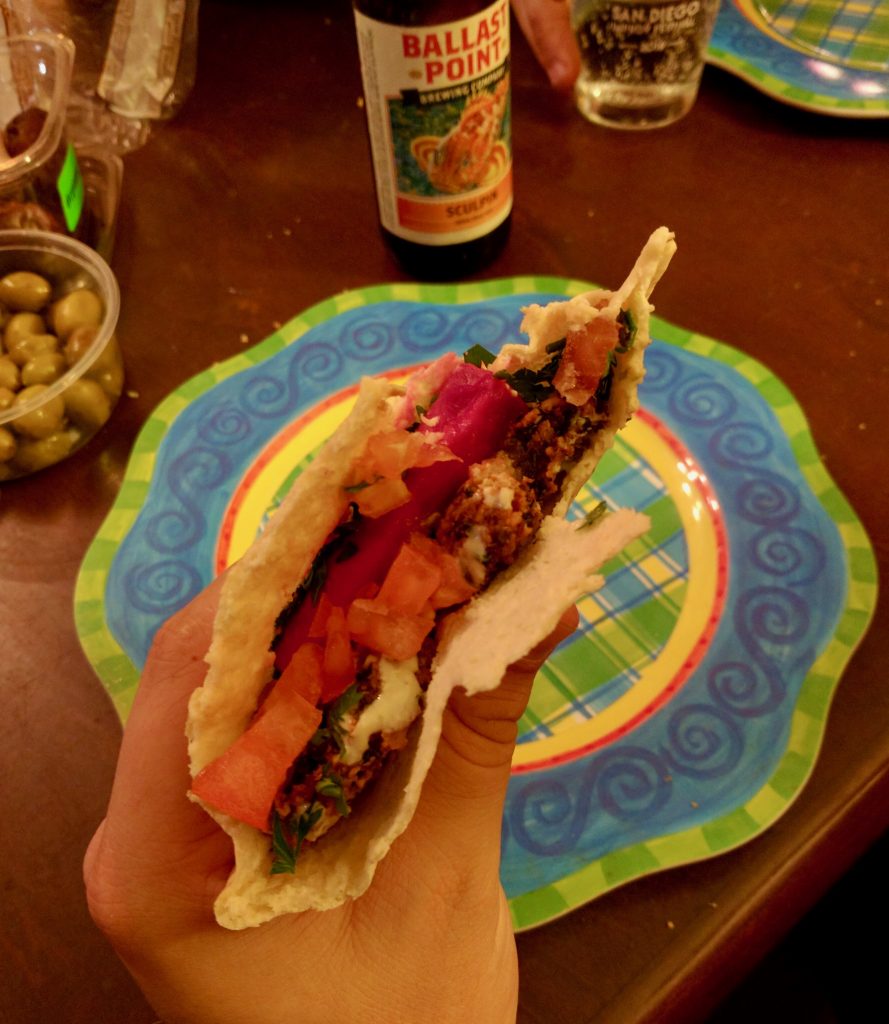 There was also Labneh. 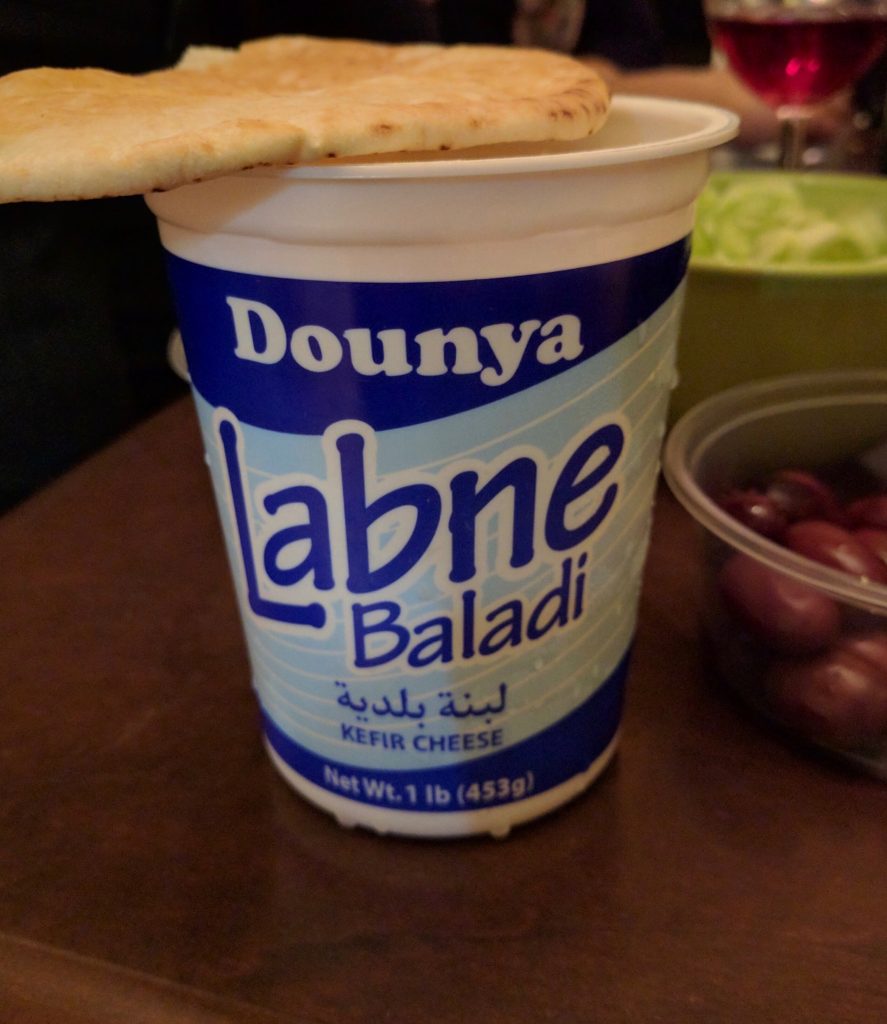 Not to mention the Greek cheese pie and eggplant dish. All good stuff. I love eggplant! 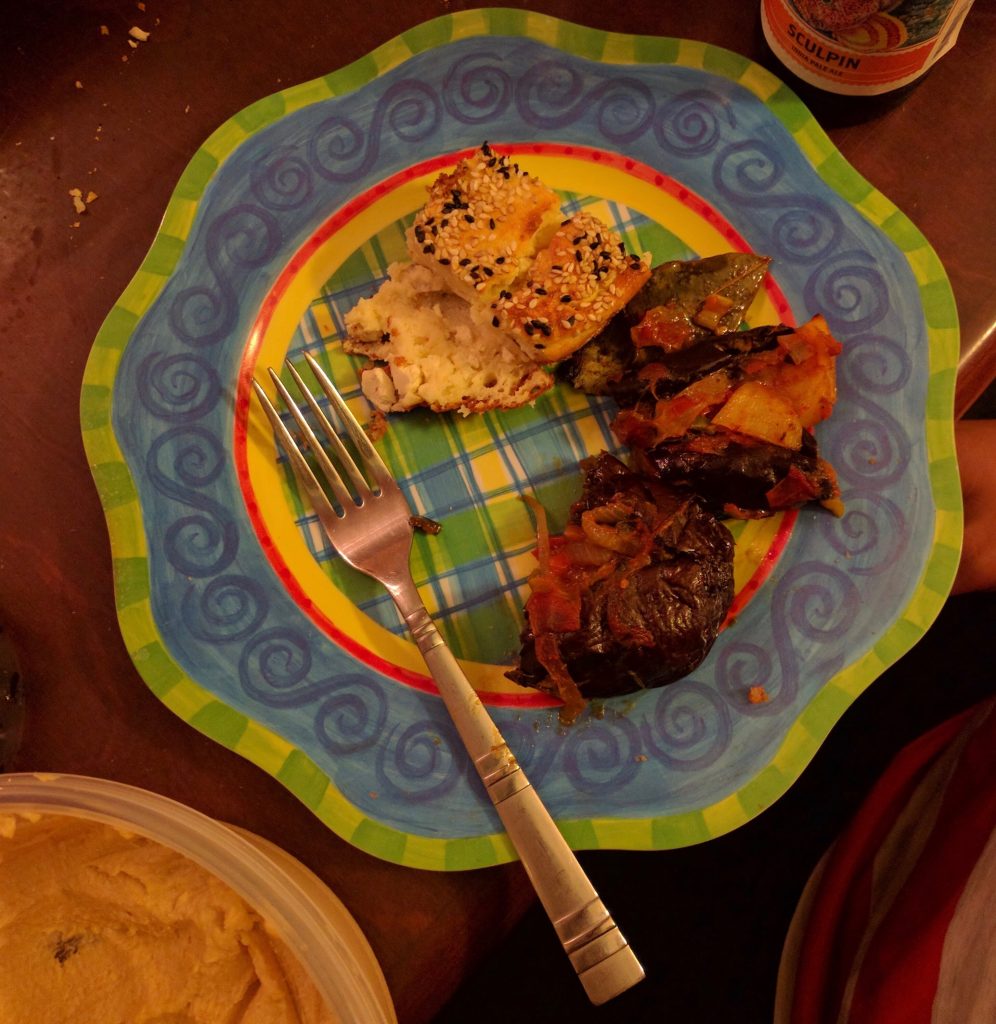 A few weeks later, it was time for a dinner of Icelandic lamb. I didn’t know this at the time, but Icelandic lamb is a thing. A delicious thing, it turns out. In San Diego, you can only get it at Whole Foods, and only for a week or two each year, provided you brave the lines of all the other people that have the same idea. Which our friends did. They secured some really scrumptious meat, and of course, they cooked it like pros, along with  mashed potatoes, mushroom gravy and onions. I was busy eating, and did not manage to take a single photo. Luckily my friend Aurea did, and so I borrowed one from her. Thanks for lending me the pretty photo, Aurea! 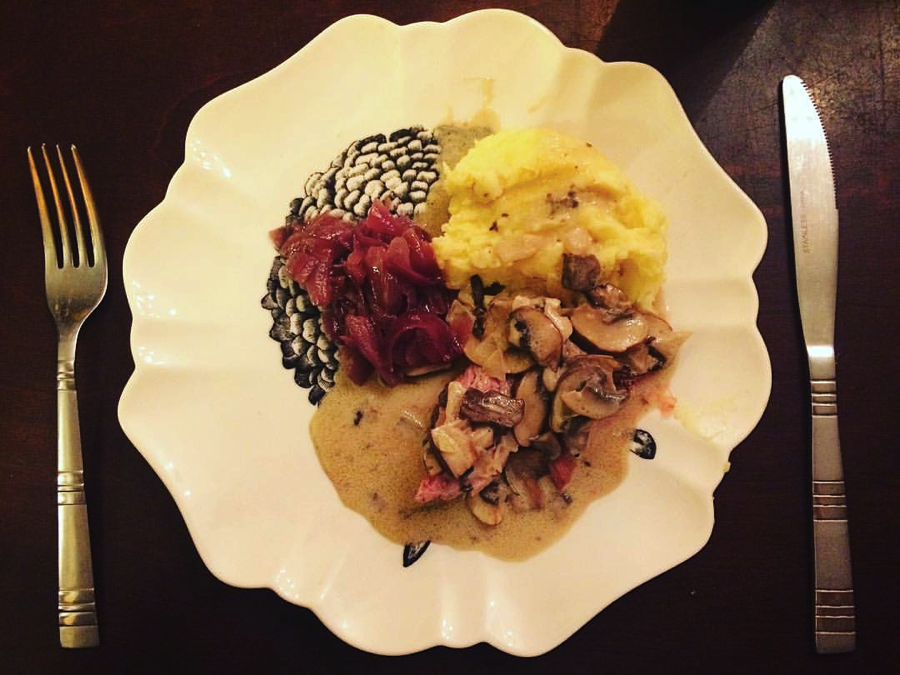 The same Icelandic friends that cooked the lamb also invited us for dinner at their place. This being San Diego, there were aperitifs of local IPAs. 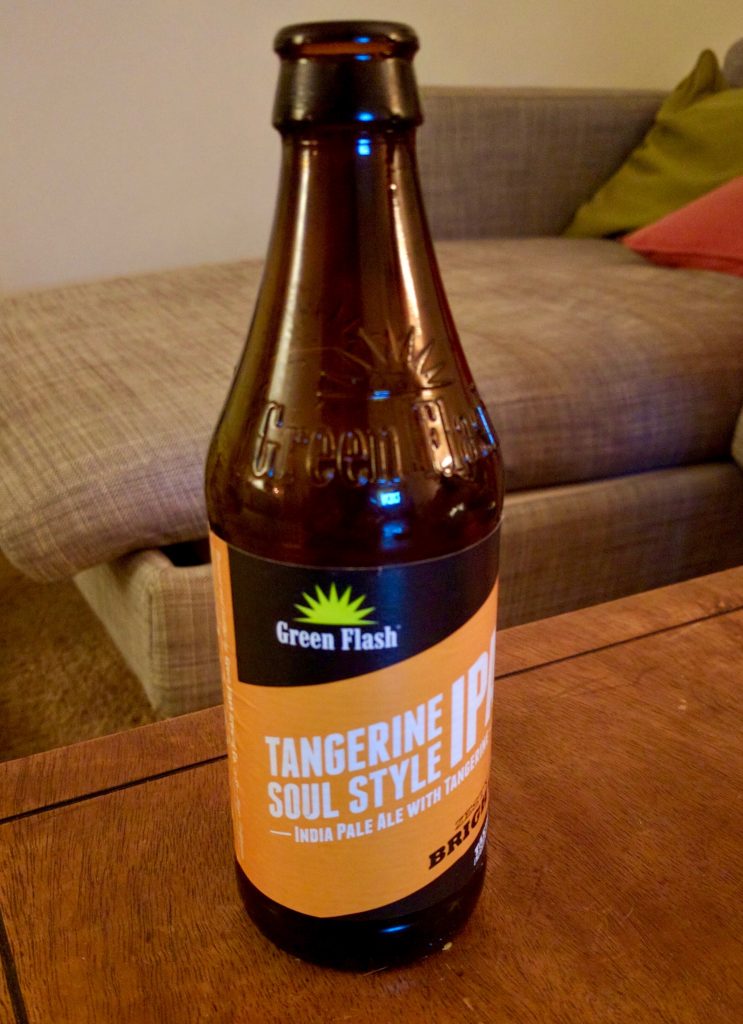 This coaster! I missed the opportunity to eat puffin when I visited Iceland a few years ago, but looking at this coaster makes me think that puffins might be too cute to be eaten (nah, who are we kidding…). 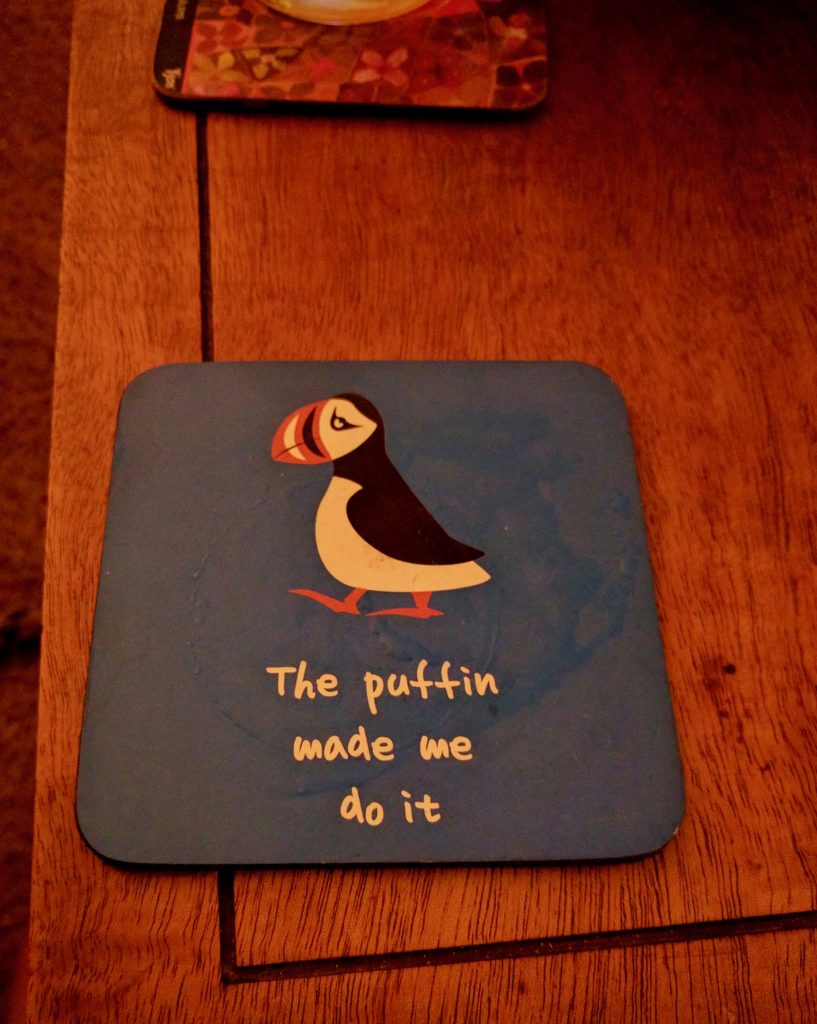 Our friends cooked salmon, vegetarian patties, potatoes, and salad for us. I particularly enjoyed the story of this salad that had it’s origin in an Icelandic cookbook. In Iceland, it’s pretty much too cold to grow anything ever, so most fruits, veggies and herbs are imported from elsewhere – and hence they are expensive. This salad consisted of only extremely perishable items (arugula, spinach, mint, and cilantro) and so it pretty much would have cost a fortune to make in Iceland, and it would have been the fanciest salad for a fancy occasion. Of course here, my friend had gotten most of the items in her CSA box. Nonetheless, this salad was gorgeous. 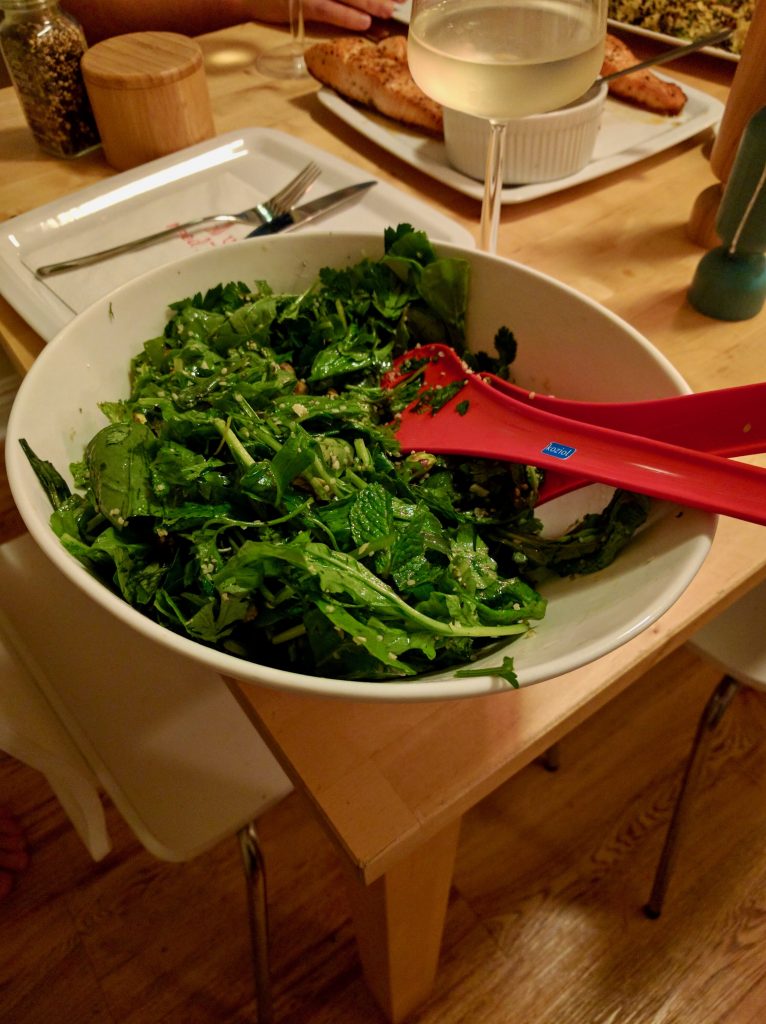 The spread is coming together… 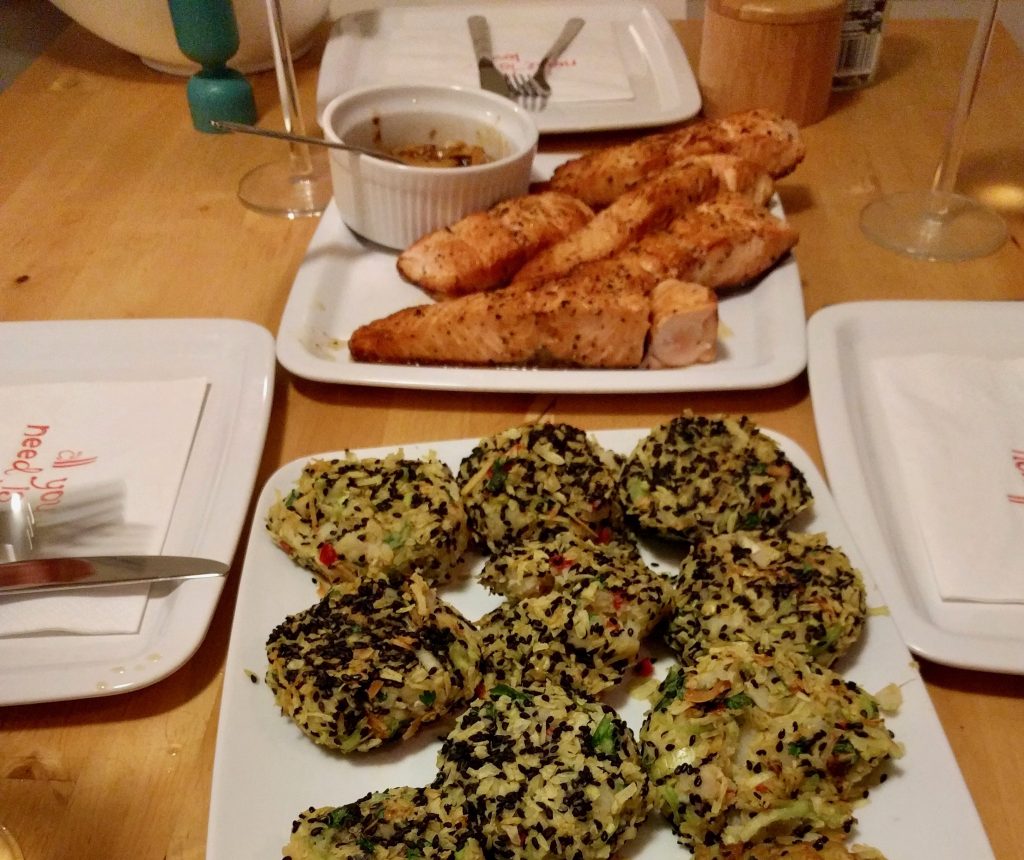 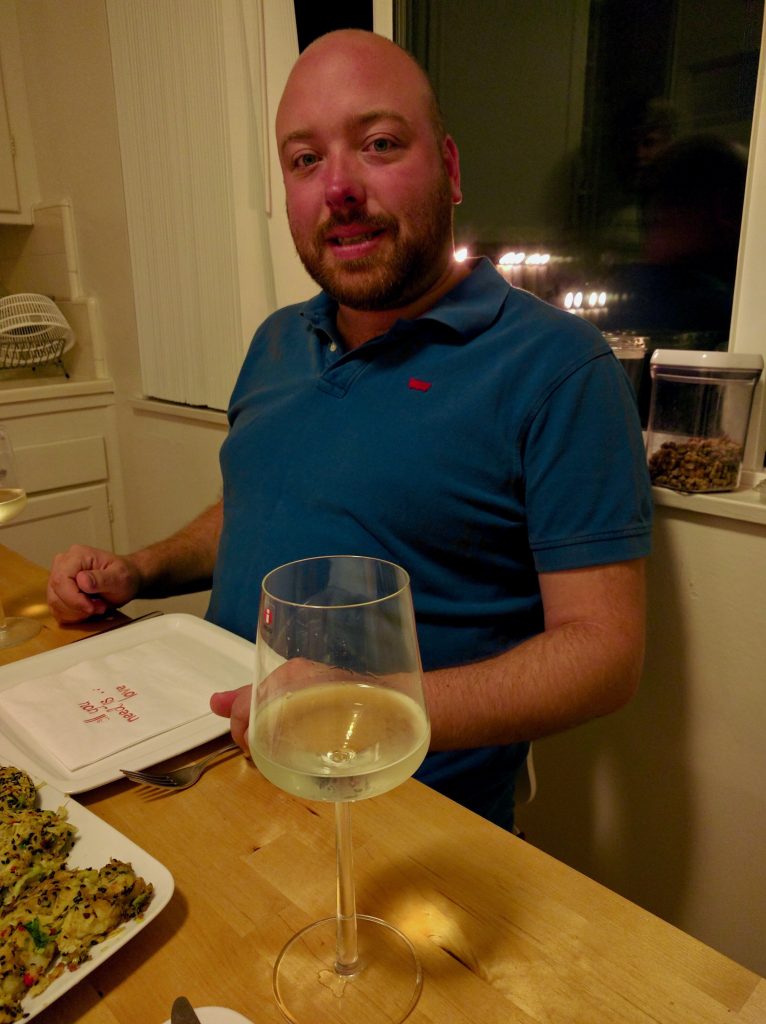 The plates are assembled! 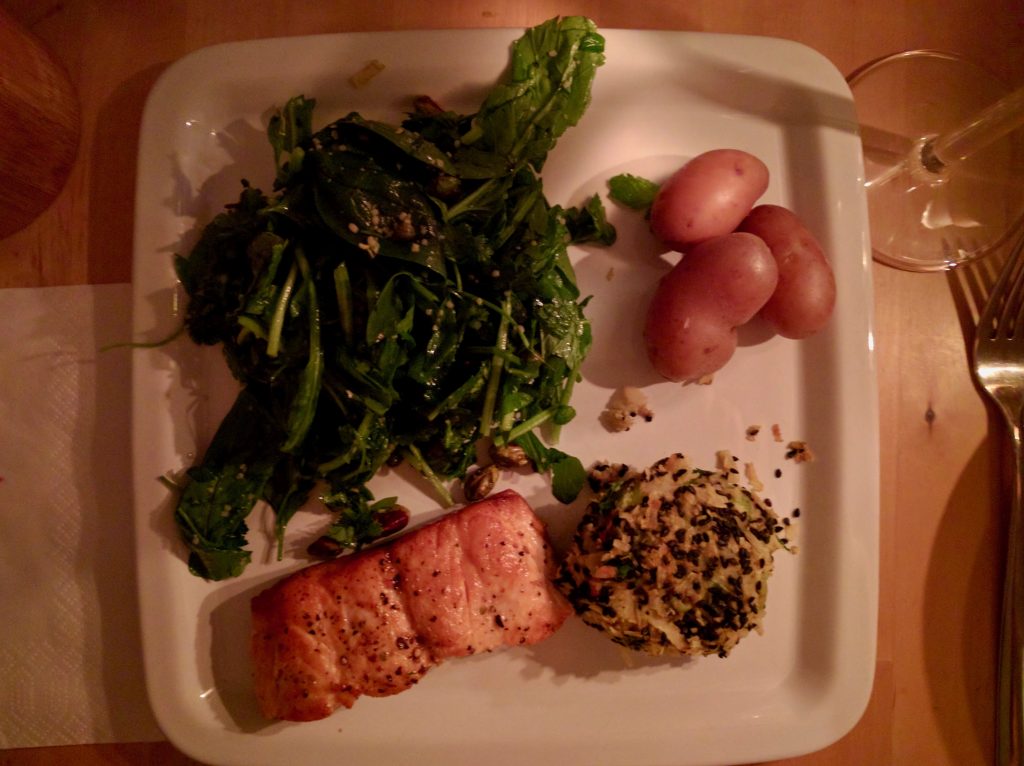 Thankful for our friends… the napkin said it best! 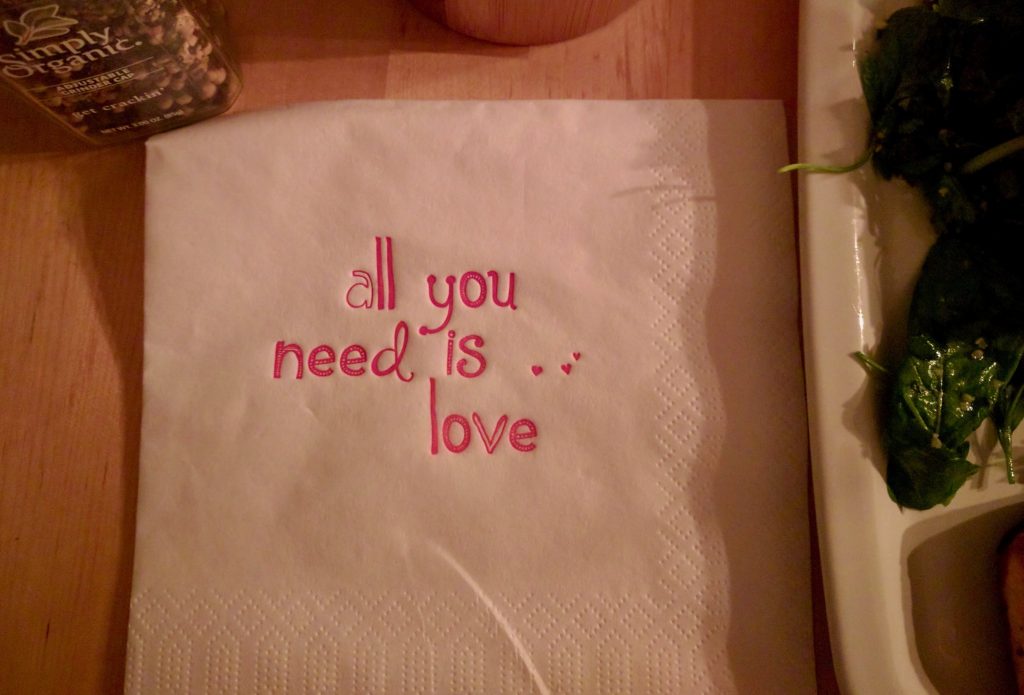 Finally, we had a bit of a spontaneous dinner at our place, when a common friend of ours came by along with one of Paulus’ work colleagues. They boys brought marinated meats from the Korean market, and I made Korean style sides, and also potatoes, just because I felt like it. 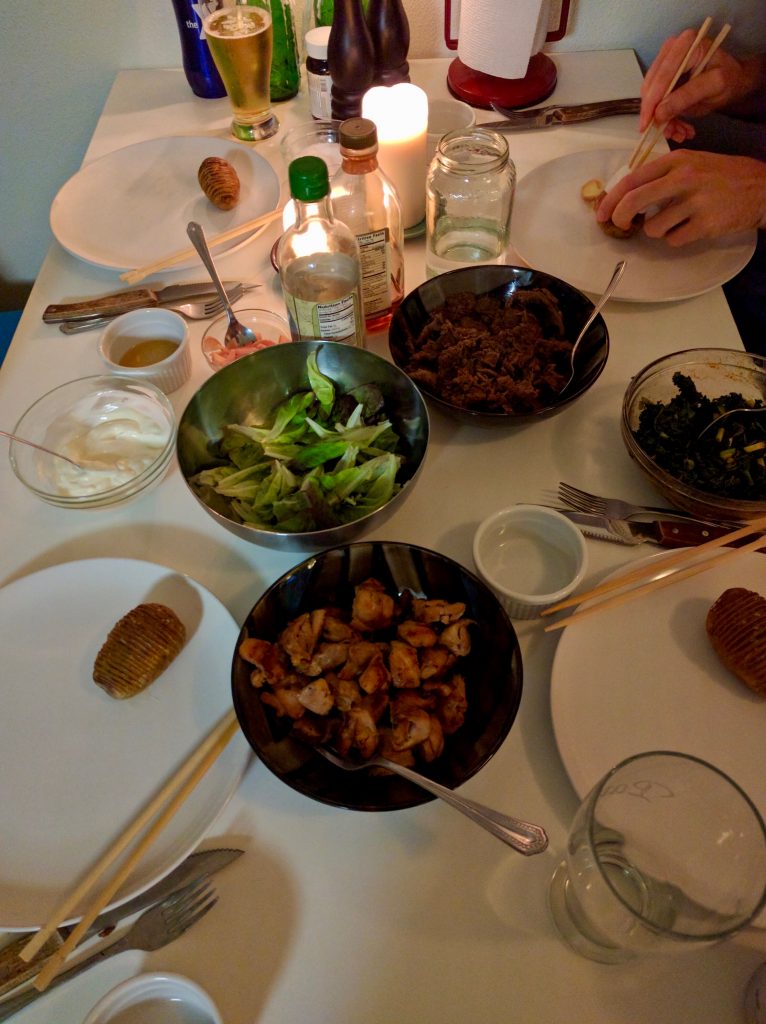 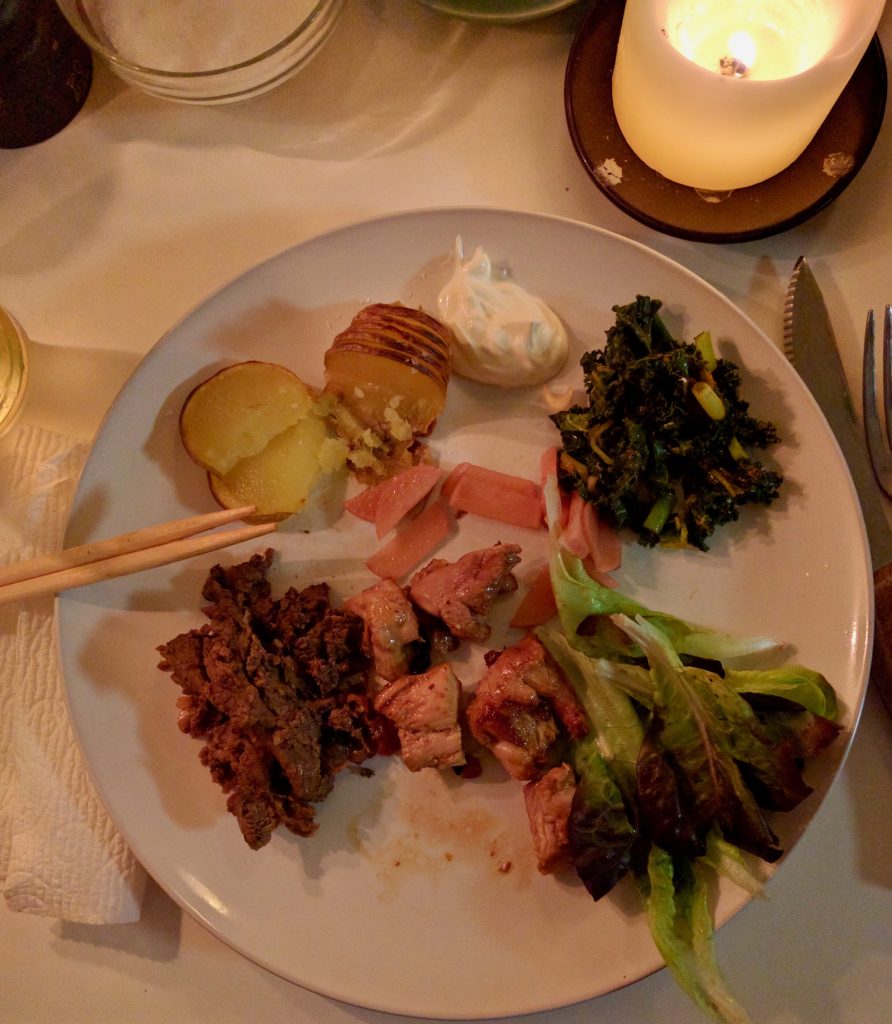 The kale kimchee was really (unexpectedly) wonderful. Usually, kimchee is made with Napa cabbage that is left to ferment. I love kimchee, but only at my favorite Korean BBQ restaurant. I’m not sure why theirs is different. It has less of the canned or jarred flavor that I’ve experienced in other kimchees, but I don’t know if that is because they actually don’t ferment it. The successful outcome (and similarity to my favorite Napa cabbage kimchee) of my 10 minute kale kimchee suggests that this might be the case. But I can’t complain, and I’m definitely going to make this kale kimchee again. In case you want to try it to, here is the recipe:

So, a bunch of dinners this month. No wonder October flew by like it had somewhere better to be. Now I’m excited to see what November brings. 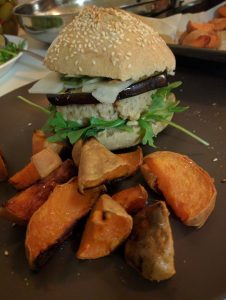 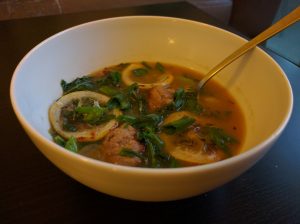 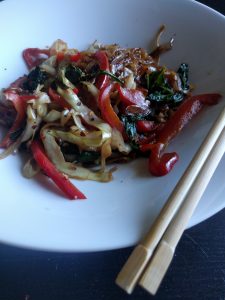