After returning to San Diego, I have started implementing changes to my life-style in order to reduce some of my impact on the planet. Some things have gone well, others not so much. This post is a sort of progress report to help myself see where I’m at at the moment.

I’ve continued to not eat so much meat, but I haven’t really improved. I’ve cooked falafel and made hummus, and for a while we got into a nice routine where we’d have meatless (and generally protein-poor) dinner, and then it was sort of up to everybody to get their proteins in at lunch. That worked well for Paulus and me, but not really for Storm, who, although he loves rummaging in the fridge, is not yet able to choose appropriately from the food pyramid. And while we have purchased both beans and chickpeas, it requires a change to my routine to remember to soak them overnight so they can be cooked for dinner – because of course we buy dry legumes instead of canned (see below).

But I have to say that when you live with a meat eater who happens to be a hater-of-legumes (except falafel and hummus), it does tend to complicate the matter of going meat-free. Of course, it presents a wonderful challenge to my cooking skills to come up with bean and lentil based food items that Paulus will eat, but it also takes time. Which is in somewhat short supply over here at the moment. Suggestions are welcome!

One change I’m contemplating is to substitute the cow’s milk in my coffee for a plant-based milk. I had this idea that soy or almond milk was worse for the environment than cow’s milk – particularly in terms of water consumption -, but that turns out to be false. And then I hemmed and hawed about buying plant milk in a carton, until I realized that I was buying cow’s milk in cartons when we weren’t at the shop that sells returnable glass bottles. So, I’ve bought some almond milk as the first phase of experimenting with different plant-based milks. And when I find one I like, I’m going to try and make the milk myself. I’m hoping I’ll fall in love with oatmilk, as I’ve understood that to be the most environmentally friendly, and because oats are cheap.

We invested in some produce cloth bags as a way of cutting down on the plastic, cardboard, and styrofoam we acquire with our fruits and vegetables. We’ve used them quite a bit already, but it is a bigger challenge than I anticipated to stop shopping at the store we know and like. Especially when Wholefoods is the best place to get loose organic produce. Lots of things are so expensive there, which means that we need to go to another store to get those, which is pretty much a non-starter for us. I’m sure there is a way – maybe we can buy cheese at Trader Joe’s every other week and then produce in the weeks between? I also have yet to work up the courage to bring jars for bulk items – since they are heavy, you’d need to ask the cashier to weigh them for you before you start filling them. For someone like me, that requires working up my courage. I am proud, though, that I pulled myself together to ask at the meat counter if they would put it in my container instead of in their plastic wrap. Unfortunately, they were not allowed to do that. This was at Sprouts. Wholefoods might allow it. If they don’t, then I don’t see how we can avoid packaging when buying meat.

So yeah, packaging remains a challenge. Even our CSA box came with a large plastic bag, a cardboard box with strawberries, and a plastic container with salad mix. Of course, that is still very minimal, considering that we’re buying directly from the source. Even in bulk stores, the produce has to be transported in some kind of packaging to the store, so even when we don’t see the packaging, it still exists elsewhere in the supply chain.

The best way to avoid packaging has to be growing stuff yourself. We only have a small balcony where we live now, but I have successfully grown all our herbs there in the past. Except for cilantro, which keeps dying for unknown reasons. I recently planted some tomatoes (read: squashed a tomato left over from last years’ plant and wiped my hands on the soil) and some basil (read: I was removing some wilted stuff from a planter when I saw that one of the plants had made seeds. So I spread some of them over the planter before removing the dried stalks). And they have now sprouted, which made me happy to a degree that seemed a bit disproportional to the event. In addition, cilantro has sprouted, although I’ve no idea where those seeds came from. But I don’t worry about those, they will wilt within a matter of weeks. I also bought basil and thyme plants from the supermarket, split the bunches into individual plants and planted them as well. If everything thrives (yeah, not the cilantro), we should have fresh herbs for the spring and summer.

After I started really looking at the waste we produce, I got a bit embarrassed about the many paper napkins and tissues I use. So for Christmas, I wished for some old-shchool handkerchiefs, and I got two pretty flowery ones from my mom. They had one big issue, though, which is that they were big. So big that I couldn’t really fit them in my pockets. And if you don’t have your handkerchief on you at all times, it serves no purpose as paper alternatives abound everywhere. So I cut each handkerchief in two and hand-hemmed them. That was surely a quintessential no-waste experience. And now I have four functioning handkerchiefs, and it’s working great for me.

We’ve also started to limit our use of paper towels for cleaning purposes. We used to use them to clean our counters and I would use one as a napkin with every meal. But with Storm, we also got a number of burp cloth things, which are great napkin and paper towel alternatives. We have enough that we can use a few everyday and not have to do laundry too often.

And speaking of laundry, we have successfully implemented the perhaps lowest hanging fruit on the path to increased environmental friendliness: We have stopped using the dryer. Really, we live in Southern California. If ever there was a place where a dryer was redundant… We used to laundry really infrequently and would have to do 3-4 loads at a time, which meant using the dryer, since our drying rack holds 1.5 loads at most. But now, since our son loves washing machines, we’re hanging out in the laundry room all the time anyway, so doing a load of laundry once or twice a week is no big deal. This is working out really well for us.

… that’s where we’re at, I guess. Next up, I want to do a comparison shopping trip, where I buy the same things from our regular store vs. from an unpackaged/bulk store, to see how much it would cost us to not buy plastic…. I also want to experiment with making a kitchen cleaner from orange peels and vinegar. There are loads of interesting suggestions online for cleaning and beauty products you can make yourself to reduce packaging, but I’ve found it all to be a bit intimidating. Hence, I’m starting with just one thing. Oh, and I’m looking for suggestions for an eco-friendly alternative to the plastic scrub sponges we use for cleaning the dishes. Maybe I should grow some loofahs? 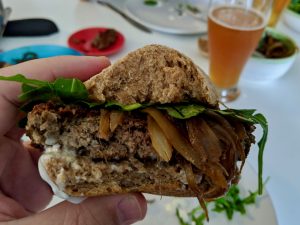