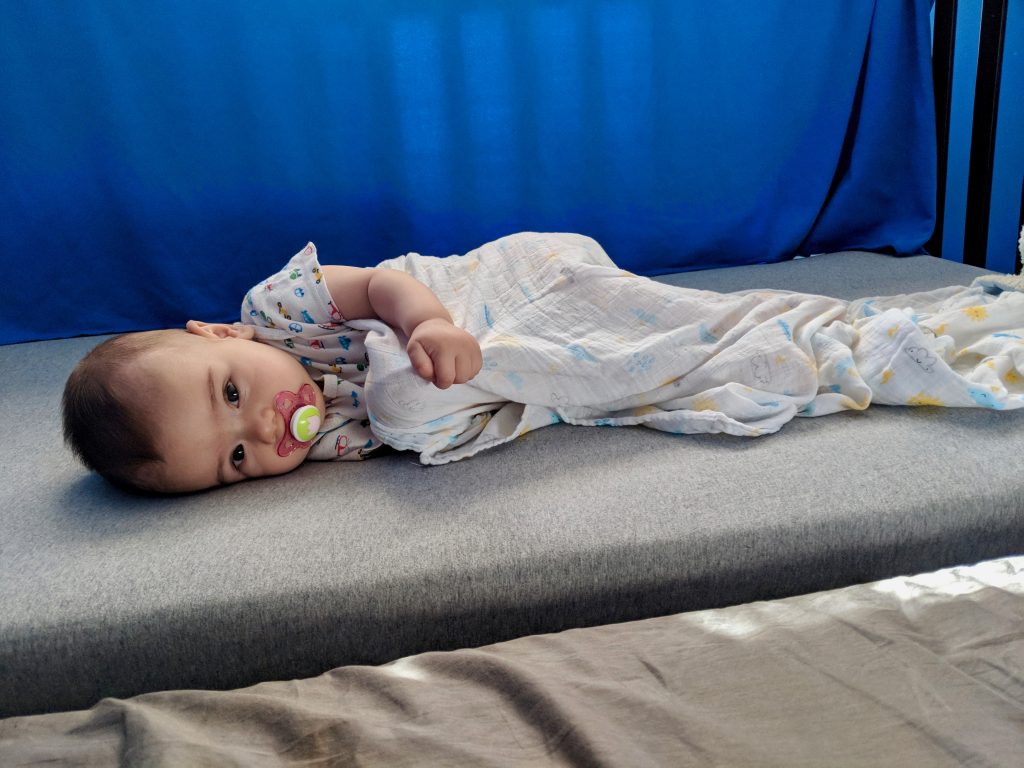 For the first three weeks after we moved, we were crib-less. It was no big deal for a few weeks – we have often co-slept at home, so we were fine with doing so here as well. And I have to say that this made life a lot easier for us while we were changing our lodgings every few days, since we didn’t have to worry about where Storm would sleep. But as soon as we were settled, I began to think longingly about sleeping on my back with my arms in whatever position they fancied, instead of on my side with my arms tucked awkwardly out of Storm’s way. So we bought a crib.

I loved the setup we had at home, so we replicated it here. At this point, I haven’t actually had my gloriously unrestrained night-sleep yet, because the crib is a bit too high compared to the bed, which makes it awkward to try and nurse across beds, and so I have to adjust the height of the crib mattress, and I haven’t gotten around to that yet. BUT. Storm has started napping in the crib.

Yeah, I’ll repeat that, now that we have all caught our breath.

Storm has started napping in his crib.

I’m sure I jinxed it now, and when he wakes up from the nap he’s currently taking (and I’m just sitting here, working!), he’ll go back to refusing the crib forever and ever. He has, however, taken about 10 naps in it over three days, so I’m feeling ok about our chances. 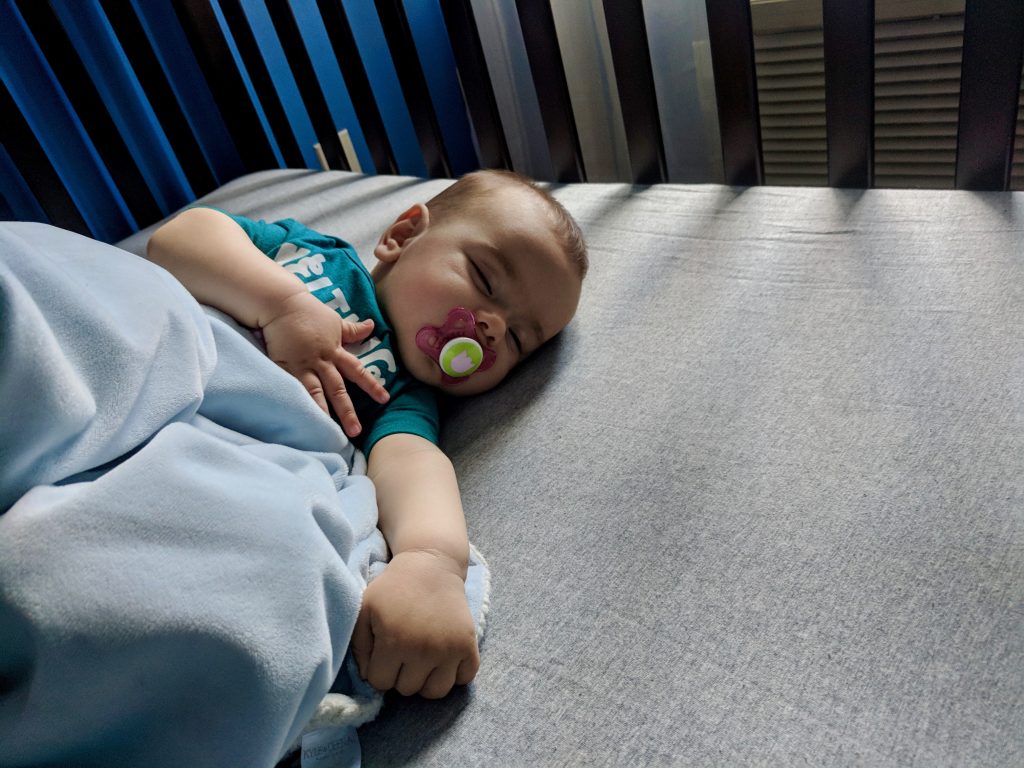 All credit for discovering the crib-napping ability goes to Paulus, who insisted that we try this again. In the face of my staunch denial that this would ever be a thing for us, and despite my declaration that I would have to leave while he tried it out, since Storm would be crying so heart-wrenchingly, Paulus gave it a shot. He put a tired Storm in the crib, tucked him in, and patiently hunkered down next to him, patting him and singing to him for the next 40 minutes, while Storm only stopped crying to suck on his thumb, almost fall asleep, but then awoke again due to loss of thumb from mouth. At around the 40 minute mark, he texted me if we still had the pacifier we bought months ago and which Storm unceremoniously rejected every time we tried giving it to him. We did have it. I don’t know what made Paulus think that Storm wouldn’t reject it this time, but he was right.

After a minute with the pacifier, Storm was asleep in the crib. I almost woke him up, because I couldn’t believe it, so I had to go look at him. I didn’t poke him this time, unlike the other day at Whole Foods where I was standing in a very long line with the stroller, with a bunch of groceries, waiting our turn at the cashier. ‘Hm’, I thought to myself, ‘Storm has been asleep for a while. He usually only sleeps 30 minutes. He’s awfully quiet. Is he breathing? Let me just touch his hand and face to see if he’s still alive. Oh, good, he his. Oh crap, he’s waking up’. For which the universe paid me back with a non-stop screaming seance that lasted the 20 minutes it took before I had paid for my groceries, plus the 25 minutes it took me to get home (including the 5 minutes it took me to stop at the park, unstrap Storm from the stroller, sit us down on a bench, cover a writhing Storm in blanket against the cold, unzip and unhook jacket, shirt and bra to attempt to nurse him in case he was crying from hunger, only to have him refuse the boob. And then reverse the whole procedure while pretending not to see the looks I got from the other park-goers).

But now he naps in the crib, and I am able to see his little belly moving with his breath from where I sit next to him with my computer, or even from the door to the bedroom if I decide to leave. Because I can.

And sure, there’s a real possibility that we’ll face pacifier-related challenges down the road. But for now, I’m thinking grateful thoughts about Paulus and the pacifier, while I’m looking at my peaceful, still breathing, crib-sleeping baby. 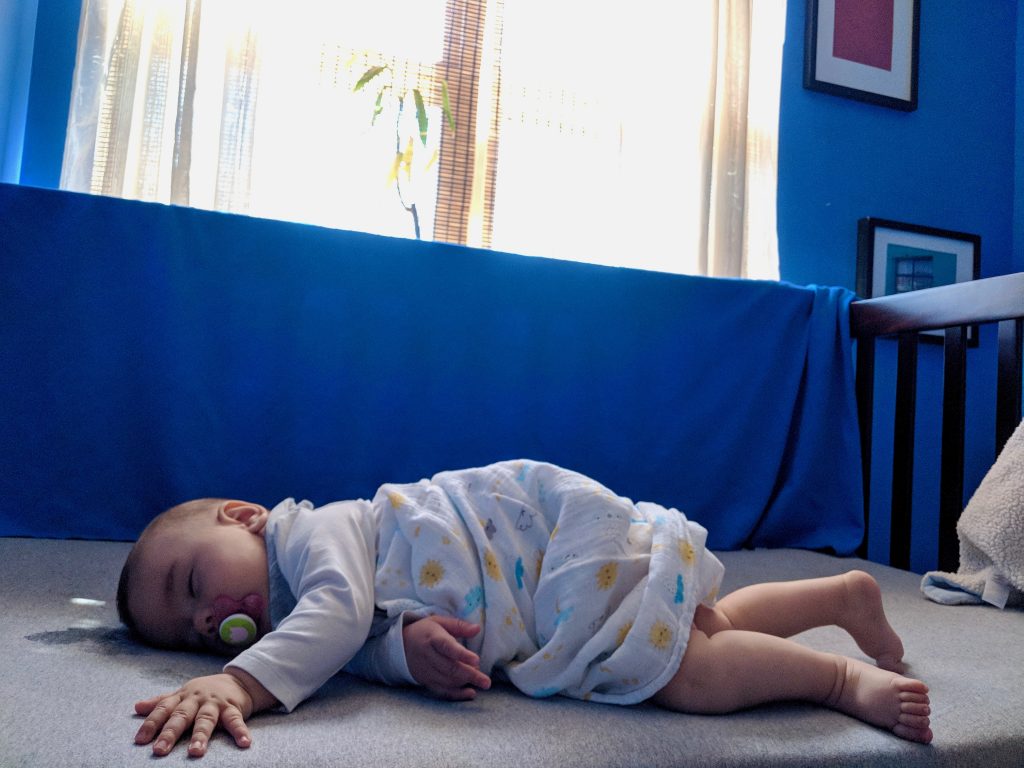