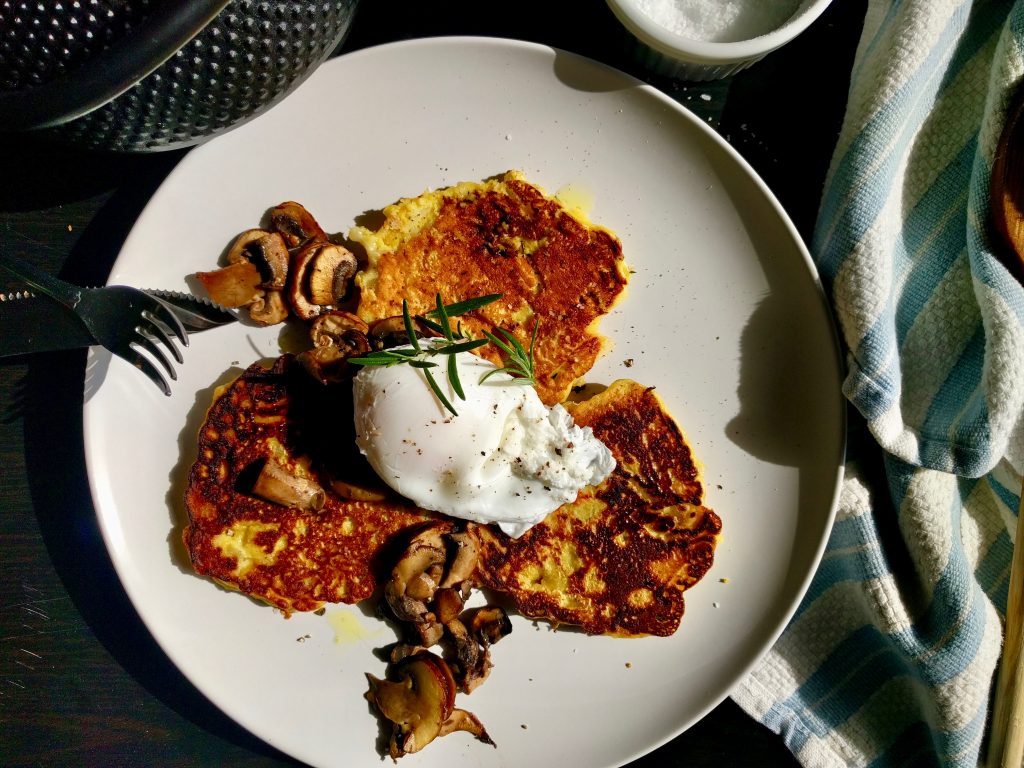 Recently, pumpkin pancakes have been featured heavily on my breakfast menu. I found a promising-looking recipe through random browsing for pumpkin recipes. In the fall, pumpkins are everywhere around here (also, and especially in people’s lattes). I’m kind of freaked out by most Halloween traditions. Like most Danes, my family didn’t celebrate Halloween when I was growing up. And while I can see the logic in decorations involving skeletons and stuff, the idea of willingly putting spiderwebs on your windows and insects on your sweets, well…that’s just yuck! But pumpkins I can get behind. Particularly to eat. I love winter vegetables for the service they must have done to humans before we had greenhouses, freezers, and modern supermarkets. I mean, these things stay good for months without any help.

Despite my general favorable opinion of pumpkins, I haven’t had much success cooking with them. There’s something about the texture that is weird, even when you roast them. Yeah, and then there was that time when I tried to make a pumpkin-beer-cheese soup, and thoughtlessly picked a local San Diego IPA as my beer of choice for the soup. If you’re familiar with IPAs, then you will understand the mouth-crimpingly bitter soup that this choice resulted in. It took a lot of cheese to make that soup even remotely palatable.

So when pumpkin season rolled around this year, I was on the lookout for new ways to partake of this autumnal delight. And that’s when I found this recipe from a blog called ‘an edible mosaic’. Given that the word ‘savory’ was featured in the recipe title, I really had no choice but to try it out. And how happy I am that I did, because these pancakes are just scrumptious.

Although the pancakes themselves are relatively easy to make, I had some prep work to do before I could get to that point. The recipe calls for pumpkin puree, which I’m sure you can buy canned in lots of places. But I wanted to make my own. Here, the peeling is underway, as is the saving of the seeds for another use.

I should clarify that I actually used an acorn squash, which presumably is not technically a pumpkin. On the other hand, I have heard that many producers of canned pumpkin in the US actually supplement the pumpkin with various variety of squash. This is because the pumpkins here have been developed to be less fleshy, so that they are easier to carve, which is what most people do with pumpkins. 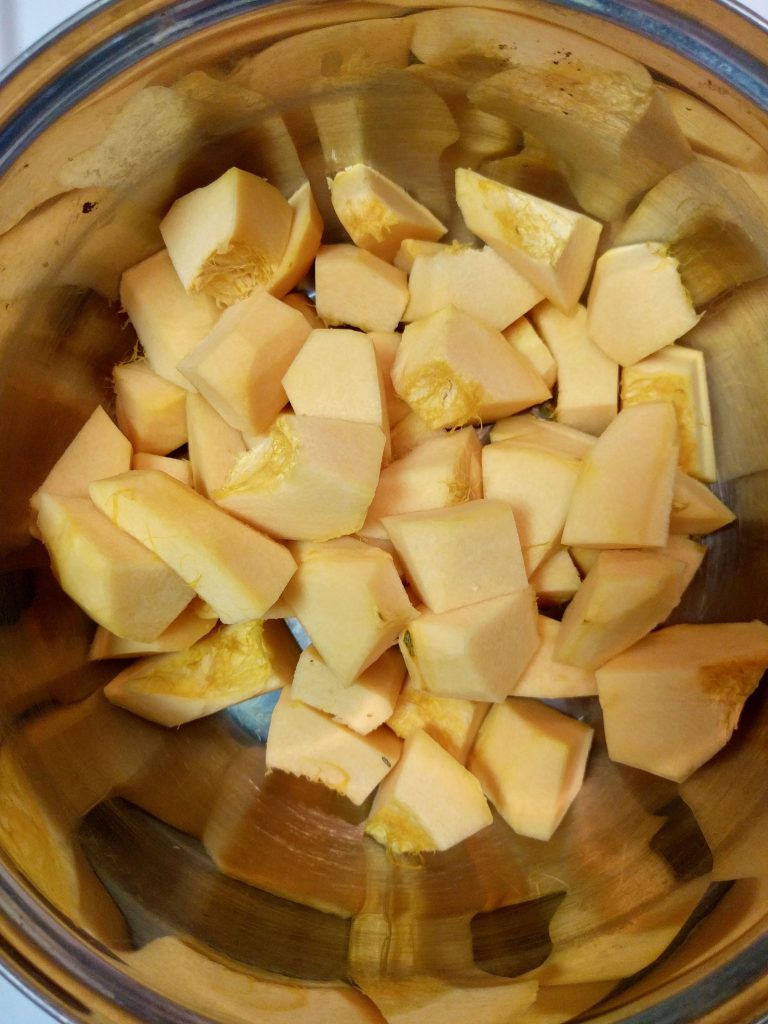 Regardless, a puree (henceforth the ‘pumpkin puree’) was made, using just the squash and some chicken stock. 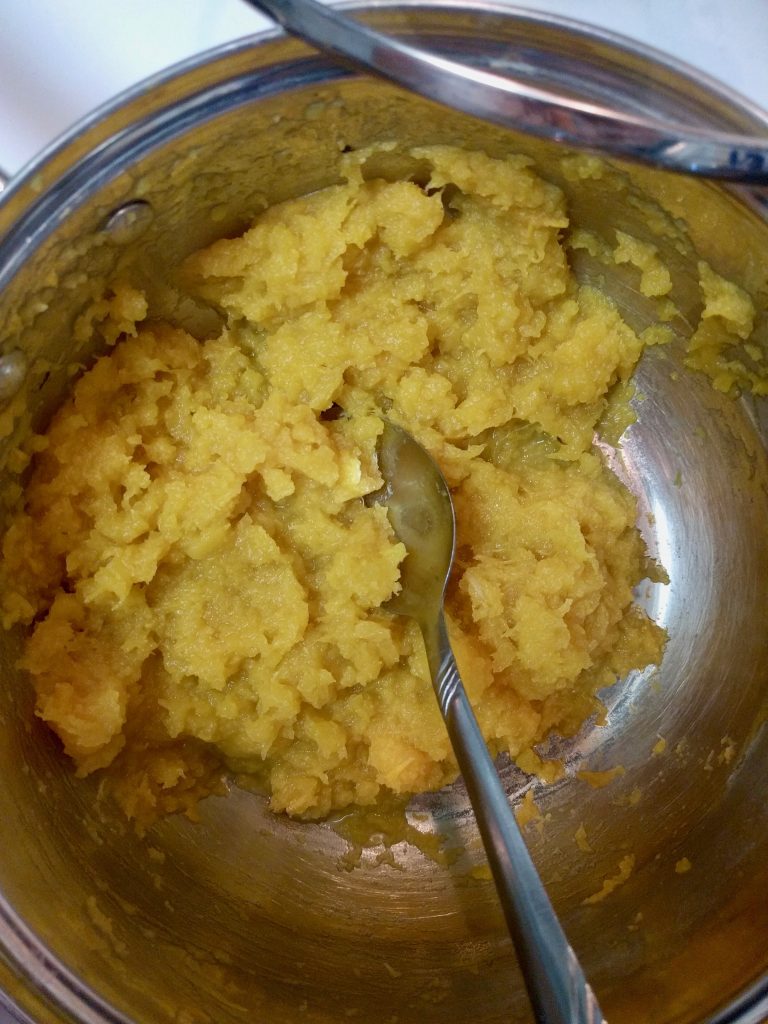 I stored the puree in the fridge overnight, so that I would be pumpkin-ready when I got up the next day. I woke up super-excited, I won’t lie, and immediately got to preparing onion, garlic and rosemary.

These were all cooked together, then set aside to cool.

After all the ingredients (including cheese!) had been assembled in the batter, the little pancakes were put in the pan to cook. 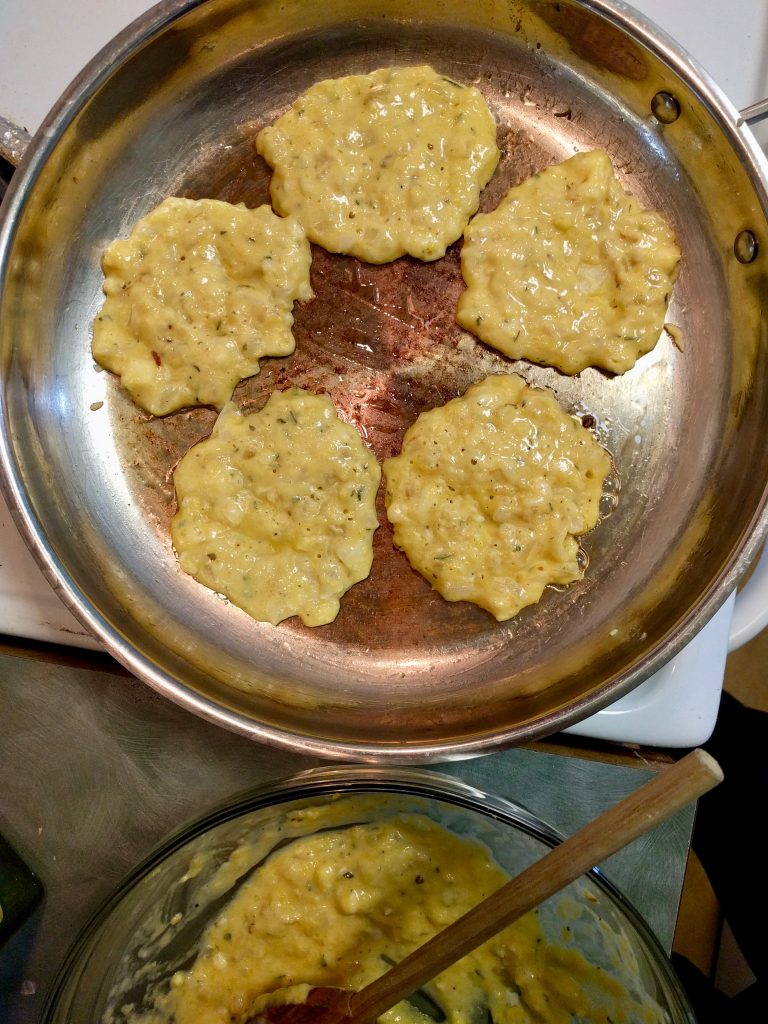 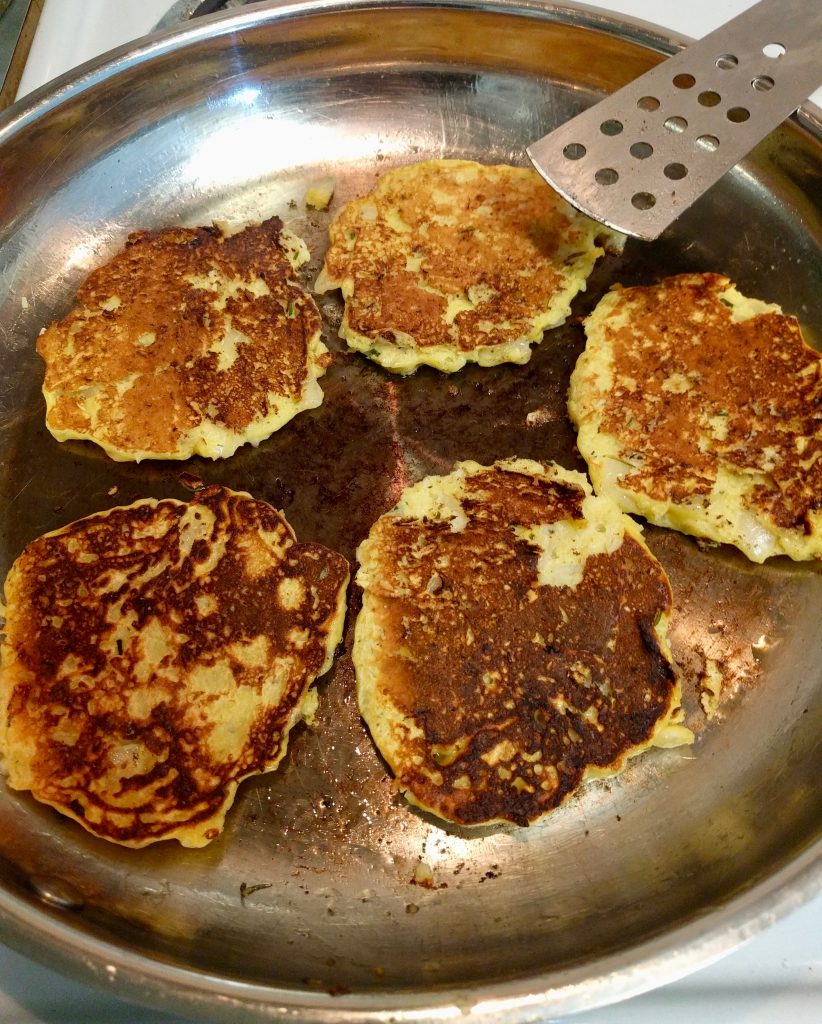 On this day, the perfect pumpkin pancakes were served with mushrooms and a poached egg. 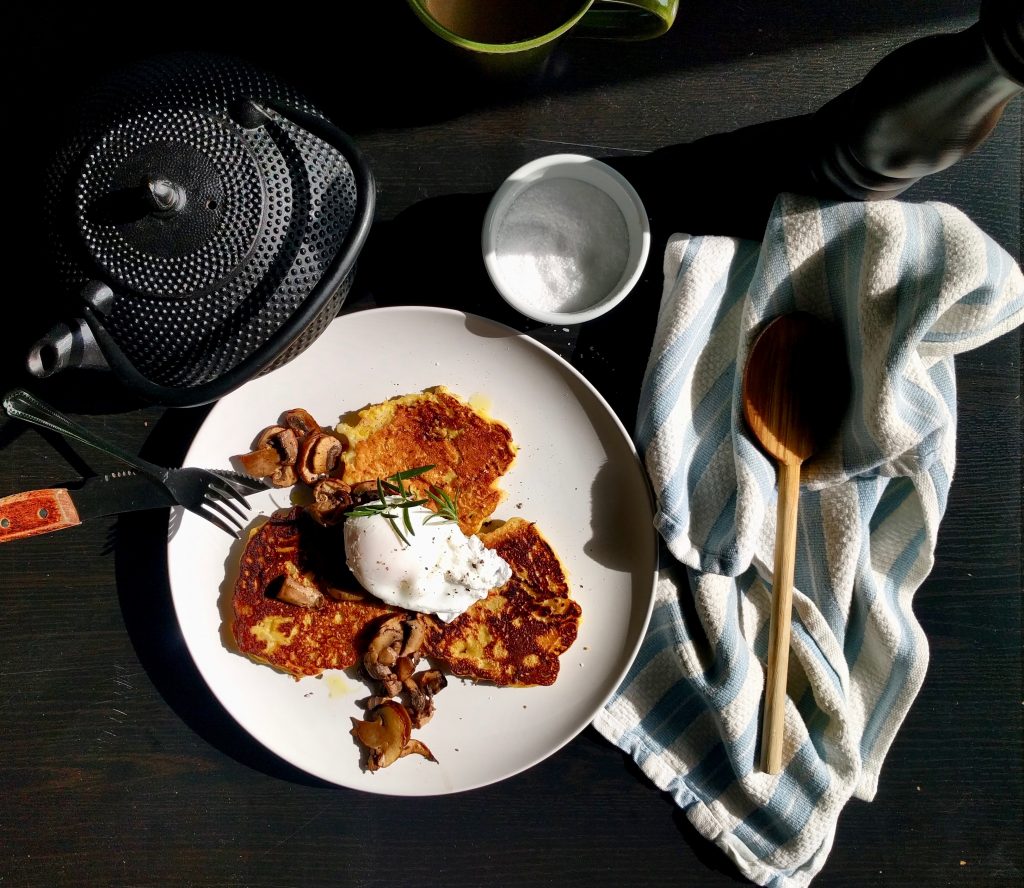 And they were truly perfectly delicious: fluffy, but still substantial, herb-fragrant from the rosemary and garlic, and salty-crisp where the cheese bits had touched the pan. After my first mouthful, I had already reserved the leftover pumpkin puree for making another batch for another breakfast. 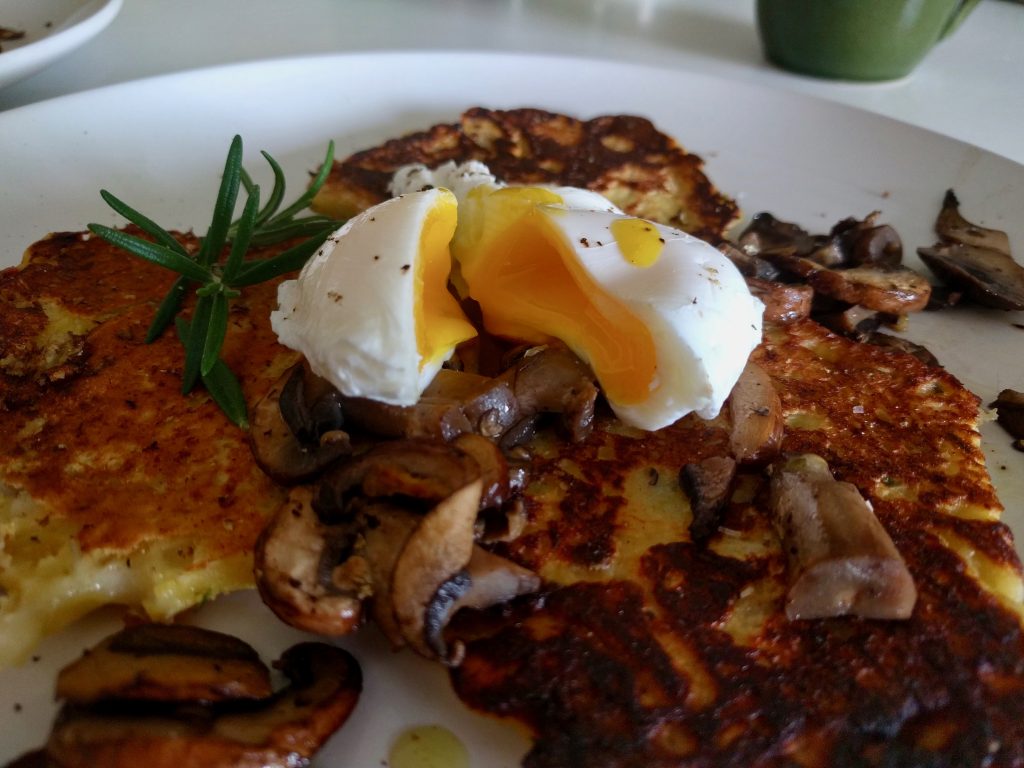 So without further ado, here’s the recipe, slightly modified from the original.

These perfect pancakes can be eaten for breakfast with egg (like I did), or on their own for lunch (I did that, too), or as an appetizer or a snack with a dollop of sour cream and herbs or scallions on top (fine, I tried this one as well). Indeed, their deliciousness seems completely unaffected by time of day. Bring on Halloween! 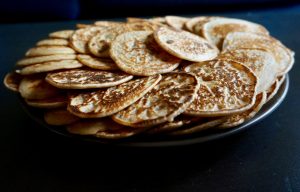 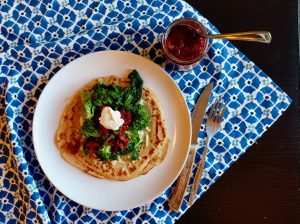