I’ve been baking bread for a long time, but it still seems magical to me that flour, water, yeast and salt can turn into crusty, fragrant, golden loaves of bread like these. 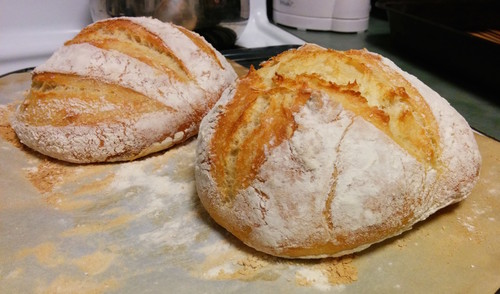 I remember from my childhood home that there was an unspoken division of labor between my parents. If something needed cooking, my mom would do it, but if something needed baking, it tended to be baked by my dad. Possibly, but not solely, because my mom was not a very good baker.

When I was younger, and perhaps still to this day, it was customary in Danish primary schools for each class to devote one hour a week to discussing issues relating to class dynamics. Usually, counter to what you might expect, the students would look forward to this event – because there would be cake. The students (or usually, their parents) would take turns to bring said cake to class each week. Once, when it was my brother’s turn to bring the cake, he asked my mom, voice all trembly, if they could please buy a cake instead of her making one. Thinking about it now, I’m wondering why my dad didn’t just bake it. But then again, I only remember him baking bread and rolls.

Growing up, my absolute favorite nights were when I’d hear from my room the sound of plastic bowls coming out of cupboards and flour bags coming down from shelves. Soon after, the smell of bread baking would waft into my room and invite me into the kitchen where I would sit and look into the oven at the bread browning. My brother developed this intuition for getting to the oven a minute or two before the timer would go off and bring my dad to the kitchen to get the bread. Alone by the oven, my brother would slip on the oven mitt, quietly open the oven door, grab a roll, and then proceed to eat it up while it was still too hot to touch. If not for the tendency of the oven mitt to lie around in his room, I’m sure we would never have known.

After moving out of my childhood home, I was an infrequent baker at best. Mostly because living in a city instead of a small town had offered opportunities to eat new exotic, cold-risen breads that my homemade grandmother-style loafs could not compete with. Eventually, when I learned that cold-rising could be done at home, my interest in baking was slowly rekindled. But it was not until I moved to America that I really started baking regularly. Even then there was a lot of trial and error, and a whole lot of eating very flat loaves. Finally, my boyfriend found a book about baking that changed how I approached the process. The book is called The New Artisan Bread in Five Minutes a Day, it’s by Jeff Hertzberg and Zoë François. I’ve only ever used one recipe from it, because it is very easy to moderate once you develop a sense for what the dough is supposed to feel like. And of course, it produces delicious bread in no time.

You can read my description of the basic recipe and procedure here, or you can purchase The New Artisan Bread in Five Minutes a Day on Amazon, or view a demo of the method by the book authors. 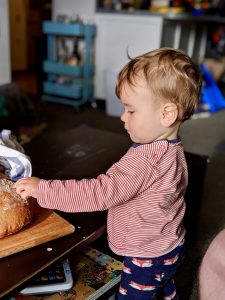 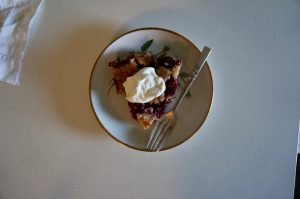