We decided at the beginning of the second pregnancy that this baby would be born at home if at all possible. We had been seeing midwives in a hospital setting initially because I was too nauseous and too tired to put in the work of finding a homebirth midwife. But in the second trimester, we found one and I changed my care to her practice.

Of course, it wasn’t long before the COVID-19 pandemic hit. Hearing stories about hospitals having to limit the number of people accompanying laboring mothers and about newborns being isolated from their mother if the mother was suspected of having the virus was concerning. And of course, the hospital did not necessarily feel like a safe place to go in the midst of a viral disease and overworked staff. I noticed that many people were considering having a homebirth for these reasons – our midwife had to turn away several clients because the demand was just too high.

I had been having Braxton-Hicks contractions since sometime the second trimester, and in the weeks leading up to my due date, they got more noticeable and more frequent. A couple of days before the due date, I started experiencing some mild cramping, and a few times in the night I noticed cramping that felt sort of like contractions. But they did not amount to anything. I was working up until the last minute and was generally feeling good with a lot of energy, so the wait didn’t bother me.

The day before my due date, I was planing on making a much anticipated potato pizza for lunch the next day, and we were joking to the baby if it could please stay put until after the pizza was devoured. In the morning on my due date, I lost my mucous plug, but this is one of the things where, although it is a sign that labor is coming, it could still be days away. I was also feeling quite crampy but still able to go about my day as usual. At lunch time we ate the scrumptious pizza, and I told the family how I was feeling, but that I didn’t think it was anything yet. But I was going to rest and take a shower, just in case. After my nap, I decided to time what I, by now, was perceiving as mild contractions. They were somewhat regular and maybe 15 minutes apart. But they were very mild, so I figured it was probably still nothing. Texted my midwife this and said I would keep her updated if anything changed. Then after I showered, the contractions were suddenly only 5 mins apart. By this point, I started getting suspicious – maybe I was in labor after all. But as the contractions were still so manageable (they didn’t even feel as strong as when I was only 2-4cm dilated with Storm), I thought that any action was still a long time away. But because the contractions were so manageable, I decided to lay down and listen to some relaxation soundtracks, so that I would be as rested as possible in the event I would be laboring through the night, especially since with Storm, I had to stand up to manage the contractions and that really tired me out in the end. Before that, I asked Paulus to start his preparations – move the car to make space for the midwife’s car close to the house, lay out plastic sheets to cover the floor, bed and couch, and to inflate the birth tub.

I rested in the bed in for a while. As soon as Paulus finished the preparations, he came to be next to me and to offer light touch massage in the intervals between contractions. For the next few hours, I labored on my side in the bed. I was listening to Hypnobirthing relaxations on my phone, practicing belly breathing and visualizing my cervix opening. The contractions were about five minutes apart, but they were still short, only about 20-30 seconds long. And although I had to concentrate on my breathing when they were happening, I didn’t think we had anything new to tell the midwife at this point, so I wanted to delay texting her.

At 4pm, my contractions were only two minutes apart, but they still felt mild compared to what I was expecting. Paulus updated the midwife at this point, but I was in my own world, breathing and relaxing. I felt like I was in a trance, present in my body, but also floating above it, hearing sounds from the outside, but focused on myself. At one point, I remember thinking to myself ‘this is wonderful’. And it was. So I kept laboring like that.

Just after 6.30pm, Paulus made the executive decision to let the midwife know where we were at. I was still hesitant, because I didn’t want her to come for nothing. I had, however, started to feel some pressure at the end of each contraction. But having had an epidural during the later stages of my first labor, I didn’t have anything to relate that feeling to. With Storm, when I was in early labor, I felt a strange pressure at some point, but it turned out that I was only dilated about 4 cm then. While I would have been happy to be at 4 cm after only hours of labor (it took more than 24 hours to reach this point with Storm), there was also the possibility that I was feeling the baby beginning to descend, and if so, we should really have the midwife with us.

She arrived at 7.15pm with her two assistants. I was still in the bed, and Paulus had started filling the birth tub. While one assistant started preparing everything, the midwife and the other assistant joined me in the bedroom. I guess they asked me how I was doing, and they took my temperature and measured the baby’s heartbeat. I was a little warm, and the baby’s heart a little fast, so I was asked to turn on my other side, and to take the covers off. That helped on both accounts. The midwife asked if I wanted to go in the tub. I was hesitant, because I didn’t want to go there too soon, in case that would halt my progress (I still thought I was in early labor, so I imagined that getting in the tub early might result in being there tub all night…). However, the midwife decided to check my dilation just to see where we were at. I agreed, but warned her that I didn’t think we were really anywhere. ‘oh, moms’, she exclaimed as she completed her examination, ‘they have so little faith’. Then to me, ‘you’re fully dilated!’.

I was stunned and happy and still in a bit of a daze. I made my way to the bathroom, and then into the birthing tub.

I had a few contractions in there, and then something changed. There was a lot of pressure, and it felt like my body took over. I lost control with what I was doing. I was on all fours, leaning my head on the side of the tub, rocking back and forwards in the water through the contractions. So much pressure. I started making more noise, I think. At the peak of one contraction, I felt my water break. Not a gentle feeling this time – more like squeezing a water balloon until it pops. And then the baby was moving, so so fast. It felt like it was crowning almost immediately. I reached down to feel the top of a furry little head, and got out of my daze enough to say’ hello, baby!’. A few contractions (I think) brought out the baby’s head, but the pressure remained so intense! The midwife’s disembodied voice told me that I was feeling the continued pressure because the baby was holding her hand by her cheek. The next contraction brought out the elbow, thank goodness, and the next one the rest of the baby’s body. I guess someone told me to turn around and take my baby, but it felt like I just knew what to do. And just like that I had her in my arms. Although, we had to double-check to establish that it in fact was a her. It was 8.12pm.

At first, I was just soaking in the feeling of this new little person. After a while, still sitting in the tub, it started to sink in that the birth was already over. I could not believe I had done it! Things were still so blurry, though, I can’t remember the sequence of events, but Paulus was there with me, and then Storm came to see his new sibling (he had been watching TV in the other room all evening, to his delight).

Our daughter was measured, and we announced that we would be naming her Eris. I transferred to the couch after a while and managed to birth the placenta and to get Eris to latch. I also ate some pasta, which Paulus fed me, while I was laying down, holding the baby. Then, finally Paulus got to cuddle Eris, and I had some stitches. In the meantime, the midwife assistants managed to clean up everything. By around 11pm, they were gone, and we were all in bed – in our own beds. It was wonderful. And so began life as a family of four. 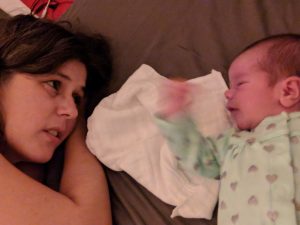