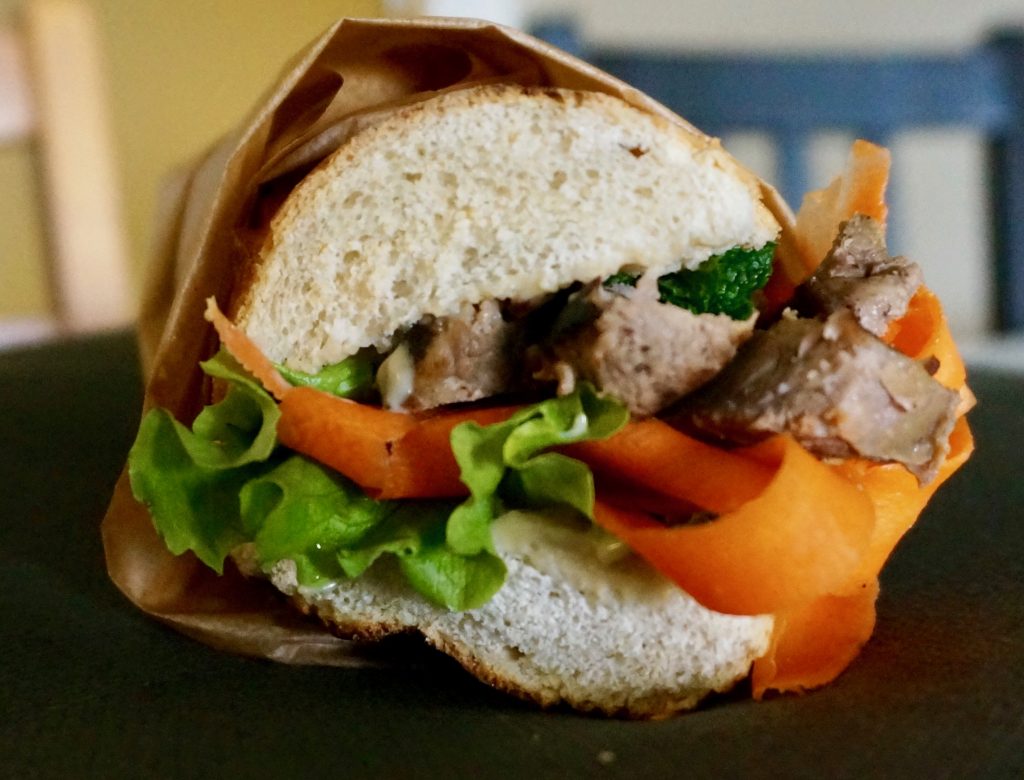 Banh mi sandwiches are a great favorite with both me and Paulus. You probably already know what a banh mi sandwich is, because they have been so very hip for the last few years. But in case you don’t, they are Vietnamese sandwiches with a French colonial influence. The French part is the sandwich bread, which is a light and crisp baguette (although I read somewhere that Vietnamese baguettes contain a mix of wheat and rice flour, which supposedly makes the bread both lighter and crispier than wheat-only bread). This baguette is then filled with some variation of meat, pate, cucumber, pickled carrot and daikon, cilantro, chili, and condiments. At this point, there are probably as many different combinations as there are cooks.

Anyway, these sandwiches are very good, and we eat them often – sometimes homemade, sometimes from the Pho restaurant nearby. We even had these at our wedding (although that was somewhat due to a coincidence that I’ll tell you about at another time. I’ll leave you with a picture of it for now).

Right, so the nearby pho restaurant makes good banh mi sandwiches, which I have come to set as the standard to try to achieve at home. Our favorite meat filling is barbecued or grilled, marinated pork, which they do very well at this place. But to me, the secret is in the dressing. I tried (and failed) for a long time to figure out what made their dressing special. I mixed mayo and yogurt with sesame oil and soy, I tried garlic and ginger, added lime, held the Mirin, but no matter what I did, the dressing just wasn’t as good as the restaurant’s. Until one day when we were eating sandwiches there and it just hit me, out of nowhere, what it was I hadn’t been able to figure out. When I tell you, you’ll laugh, because it’s such a recognizable ingredient, but it was also an ingredient that I didn’t expect in this cuisine, so my mind just refused to process the flavor impressions that it got for what they were. The secret ingredient was (Madras) curry powder!

Mind blown facial expression was quickly substituted, however, for a happy relief, because curry powder is already part of my spice cabinet, so now the elusive dressing was within my reach.

I’ll share the recipe with you, but you should be aware that they use different dressings in different places, and now that I’ve set you up for an epiphany, you will probably be disappointed. But give the curry dressing a chance!

Anyway, I made myself a banh mi inspired sandwich recently. It wasn’t exactly right, for a few reasons. One, because I used some beef I had in the fridge, so it wasn’t marinated. Two, because I couldn’t be bothered to pickle carrots (and I didn’t have any daikon either) I just used them raw. And finally, I had neither cucumber, nor chilis or cilantro to spice up my sandwich. Still, the result was decent, and if you haven’t yet tried a banh mi sandwich, I can only say that it’s high time that you did. 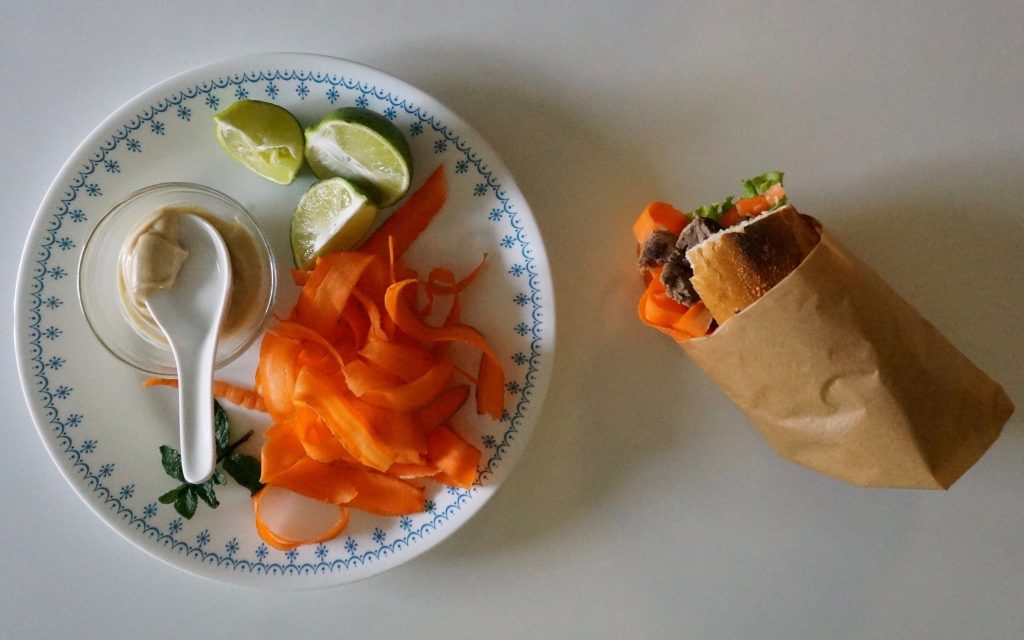 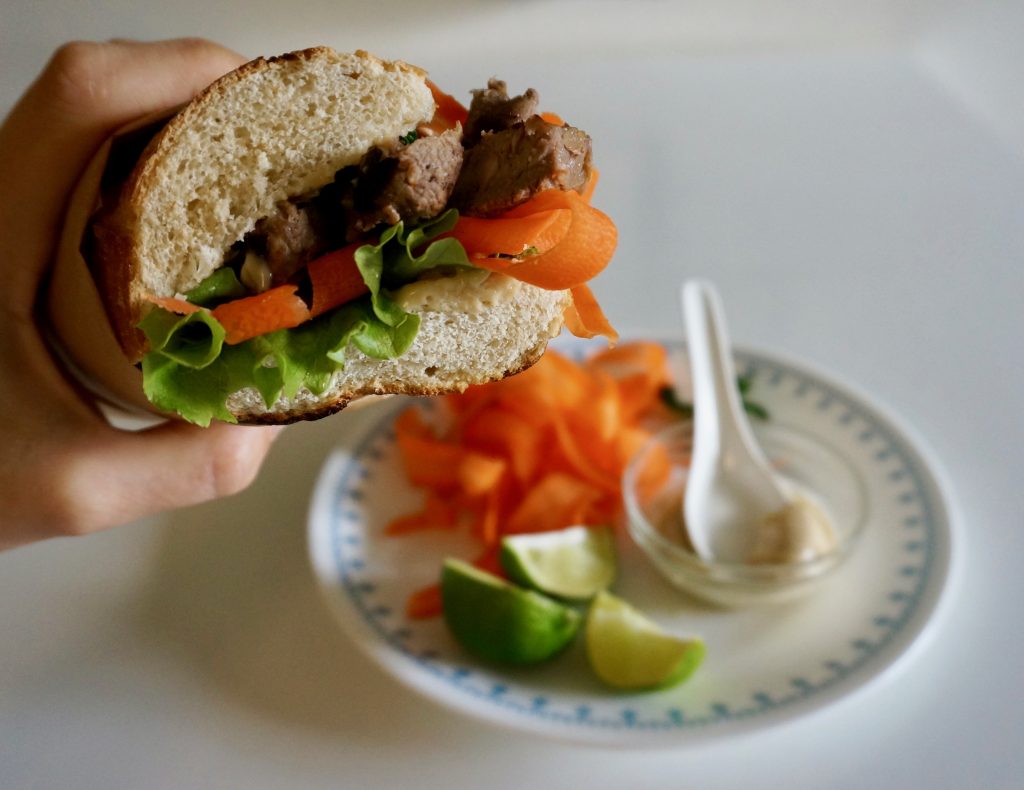 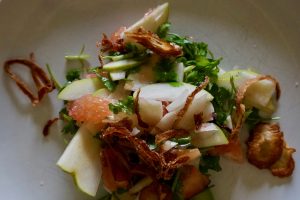 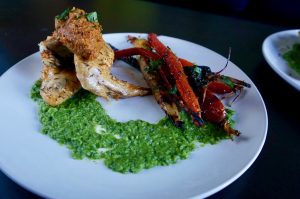 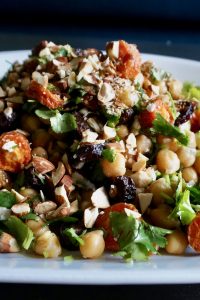 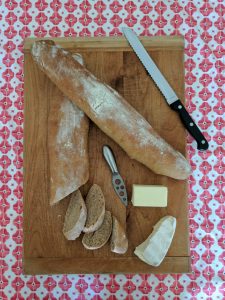