Since Storm is already 10 weeks old, his two month update is probably due. 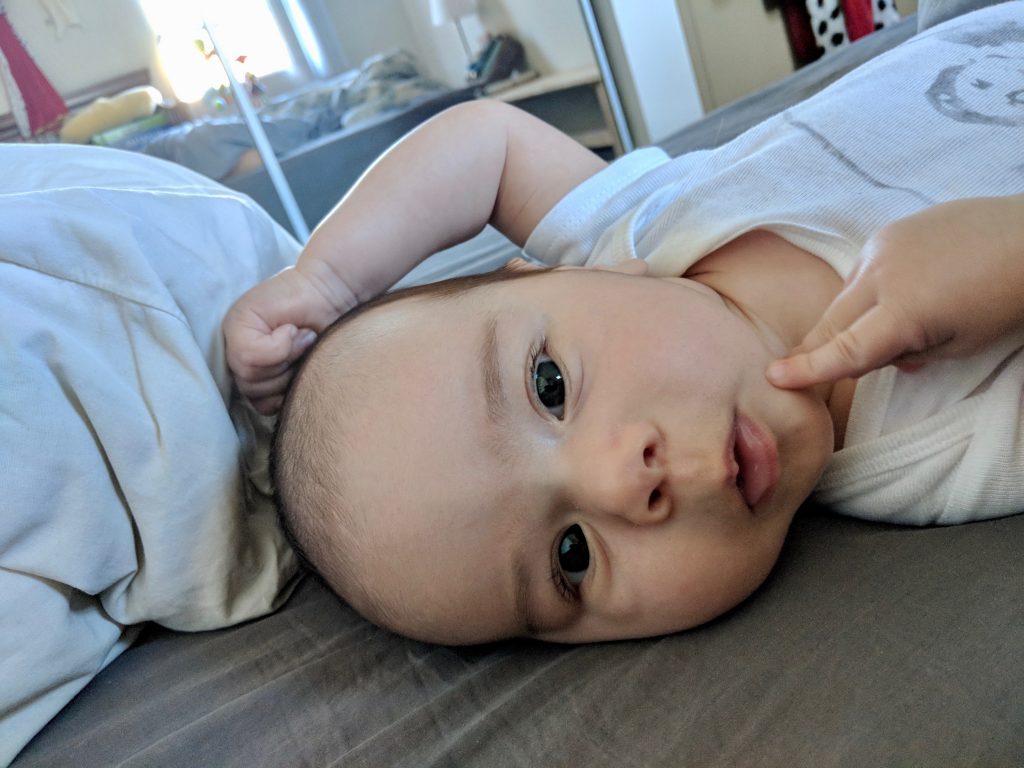 Since our families left, we’ve fallen into a fairly predictable routine. In the morning, Storm wakes up been 6.30 and 7. I get up with him, change him, dress him, and then he hangs out on the shower mat or in the bouncer while I have a quick shower. 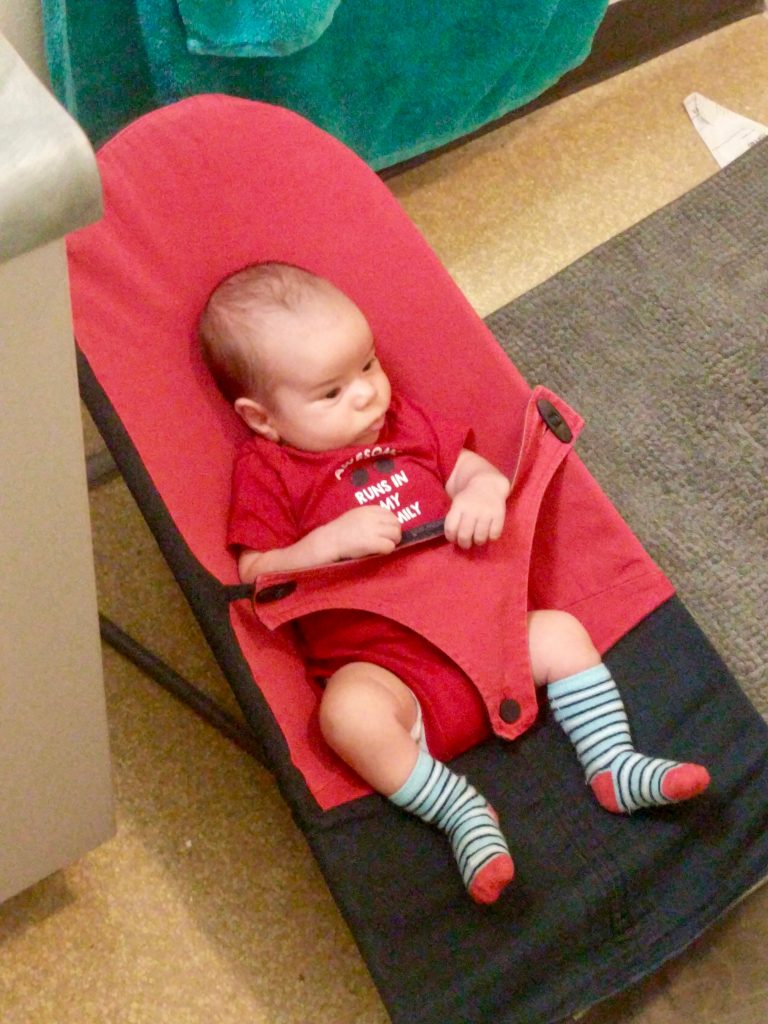 Hanging out in the bouncer while I shower.

Then I try to make a quick breakfast for myself while Storm is on his play mat. Which he doesn’t love. I eat while I nurse him. Most days we call my mom somewhere in parallel with one or more of these activities. When it’s all done, is usually almost nine o’clock. 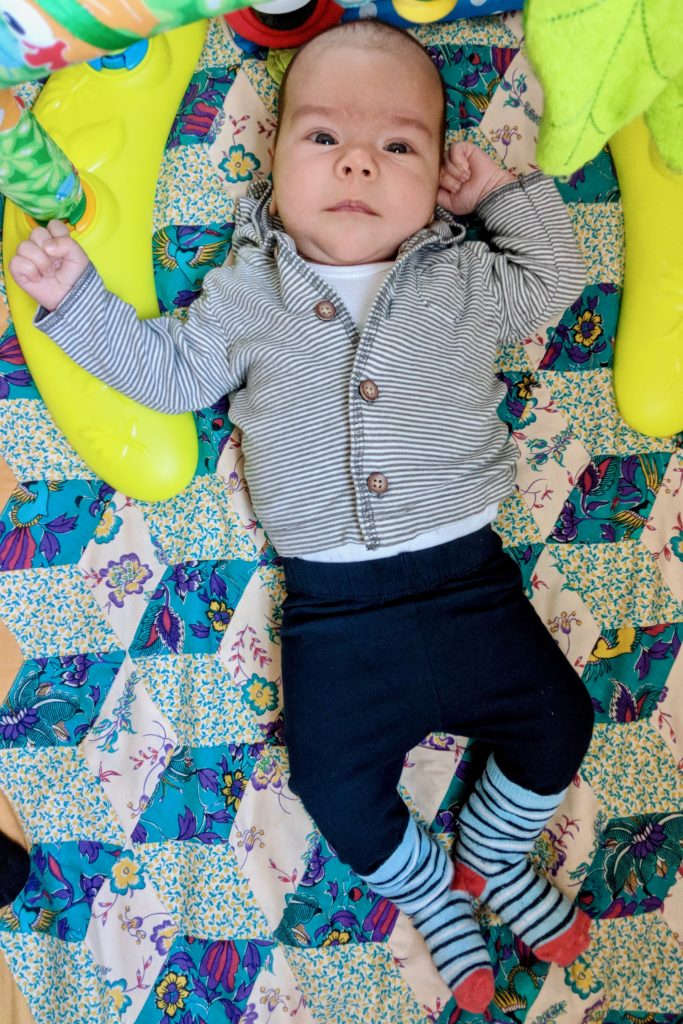 If it’s a weekday, then I go to work and Paulus watches Storm. Some days I ‘go to work’ in our study room. Other days it’s the community lounge, or the nearby Starbucks. Usually Storm has a nap in the carrier with Paulus, and when he wakes up, he gets a bottle of breast milk from the freezer.

At 12 I return from work. Paulus and I have lunch, and we all hang out until 1, when it’s Paulus’ turn to go to work. Then Storm and I watch some Netflix, do some tummy time, nurse some more, try to nap anywhere but the carrier, and finally Storm then takes a nap in the carrier. 4pm is the end of the official ‘work day’. We have also gotten good at working and doing chores with Storm in the carrier. 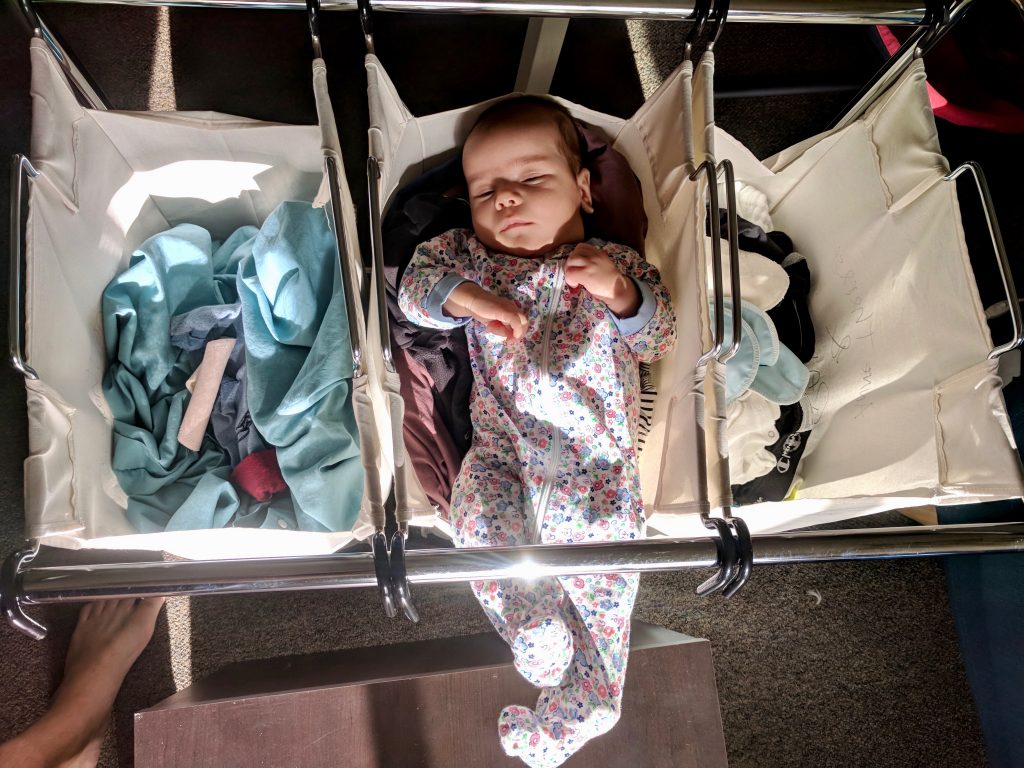 Helping out with the laundry… 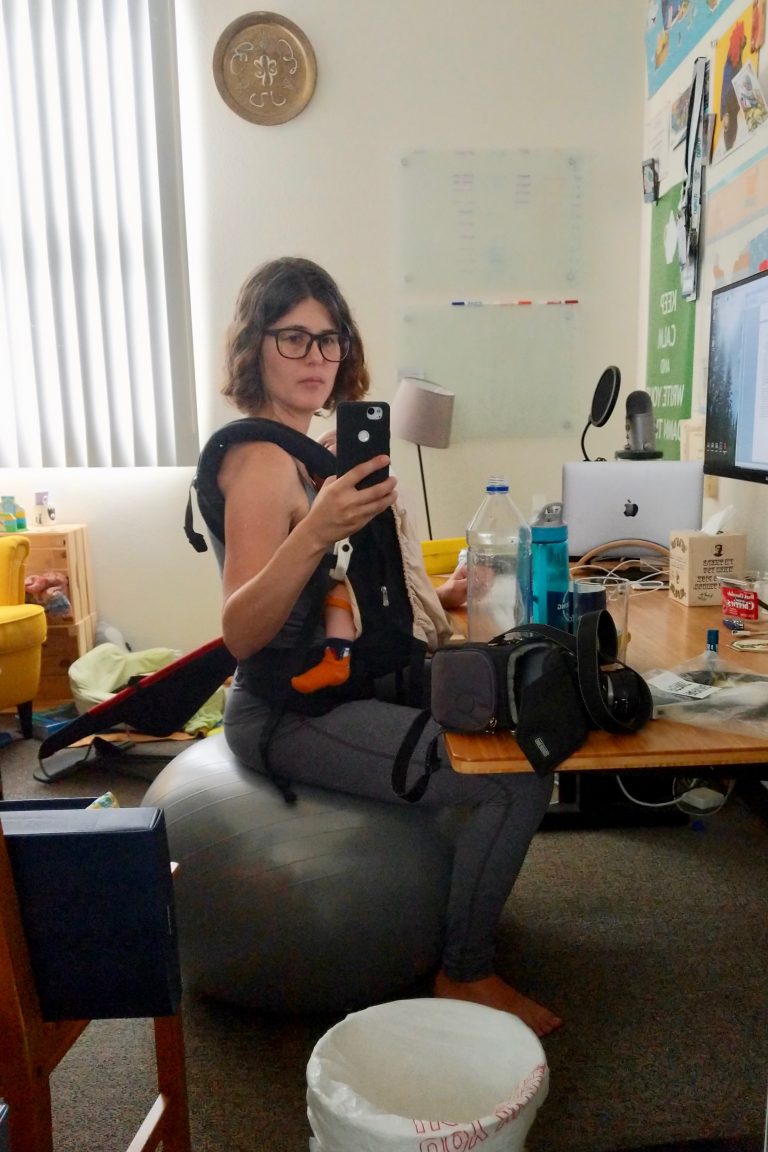 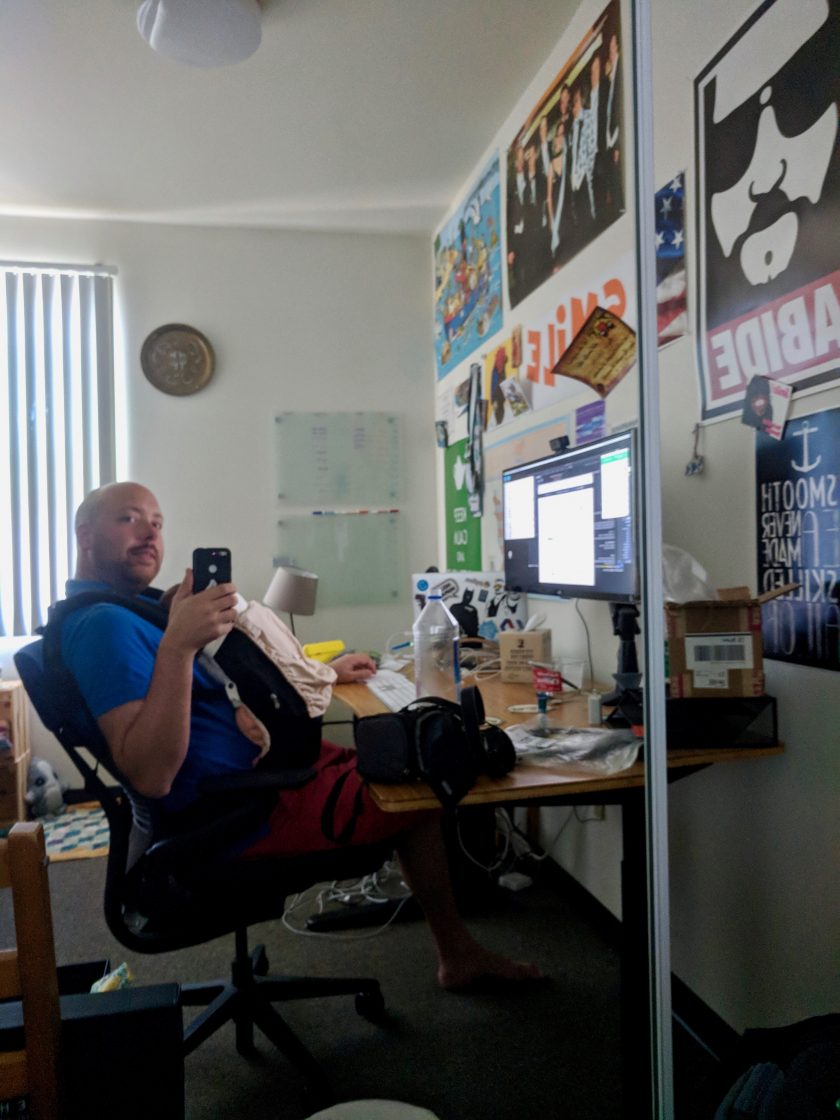 Around 5 we start thinking about dinner. Which we eat between 6 and 6.30. Well, sometimes one person eats from 6.15-6.30 while the other attempts to calm Storm, and then we alternate from 6.30-6.45. And at 7 or 7.30, we begin Storm’s bedtime routine. Some nights he has a bath first, but otherwise, Paulus puts him in his pajamas and his ‘Jip en Janneke’ sleep sack, while I brush my teeth and put on my own pajamas. Then we tell the google assistant to activate ‘baby bed time’, which lowers the light to a soft yellow. Then we say goodnight to Paulus (mostly me, Storm is generally just crying at this point), and I try to nurse Storm to sleep. The reason why I go to sleep when Storm does is that he usually sleeps his longest stretch when he first goes down. Usually, it’s between 3-4 hours. And I need that rest, because the rest of the night he often wakes every 2-2.5 hours to eat. I say wake, but he often doesn’t even fully wake. He just makes so much noise in his sleep that I wake up, and if he is not fed at this point, he does wake. And also cries. Sometimes, nursing before bed doesn’t work, and Storm gets himself worked up instead of calming down. On those nights, Paulus walks around with Storm in his arms, playing the Storm Sleep playlist, the most notable track of which is Robbie Williams’ Angels. When that successfully puts our boy to sleep, I get an uninterrupted 3-5 hours of sleep, and Paulus gets to watch a whole lot of Netflix, while Storm sleeps in his arms.

Shortly after Storm turned one month old, I figured out how to nurse him while he’s in the crib and I’m in the bed. We sometimes end up bed sharing anyway, if I fall asleep while nursing in the night; the logistics of bodies means that I can only nurse from one side when Storm is in the crib.

The past weeks brought a host of little changes. Around four weeks, something started changing in Storm’s sleep patters during the day. When it began, we interpreted it as him refusing to nap some days, or only wanting to nap on someone or in their arms. Probably, it was just the beginnings of where we are now, which is in a place where Storm only naps in the Ergo carrier. But oh, how he naps there. If Paulus is carrying him, he’ll generally nap for at least two hours, sometimes up to four. With me, his naps are shorter. Maybe it’s not so easy to sleep with your head practically in the food… 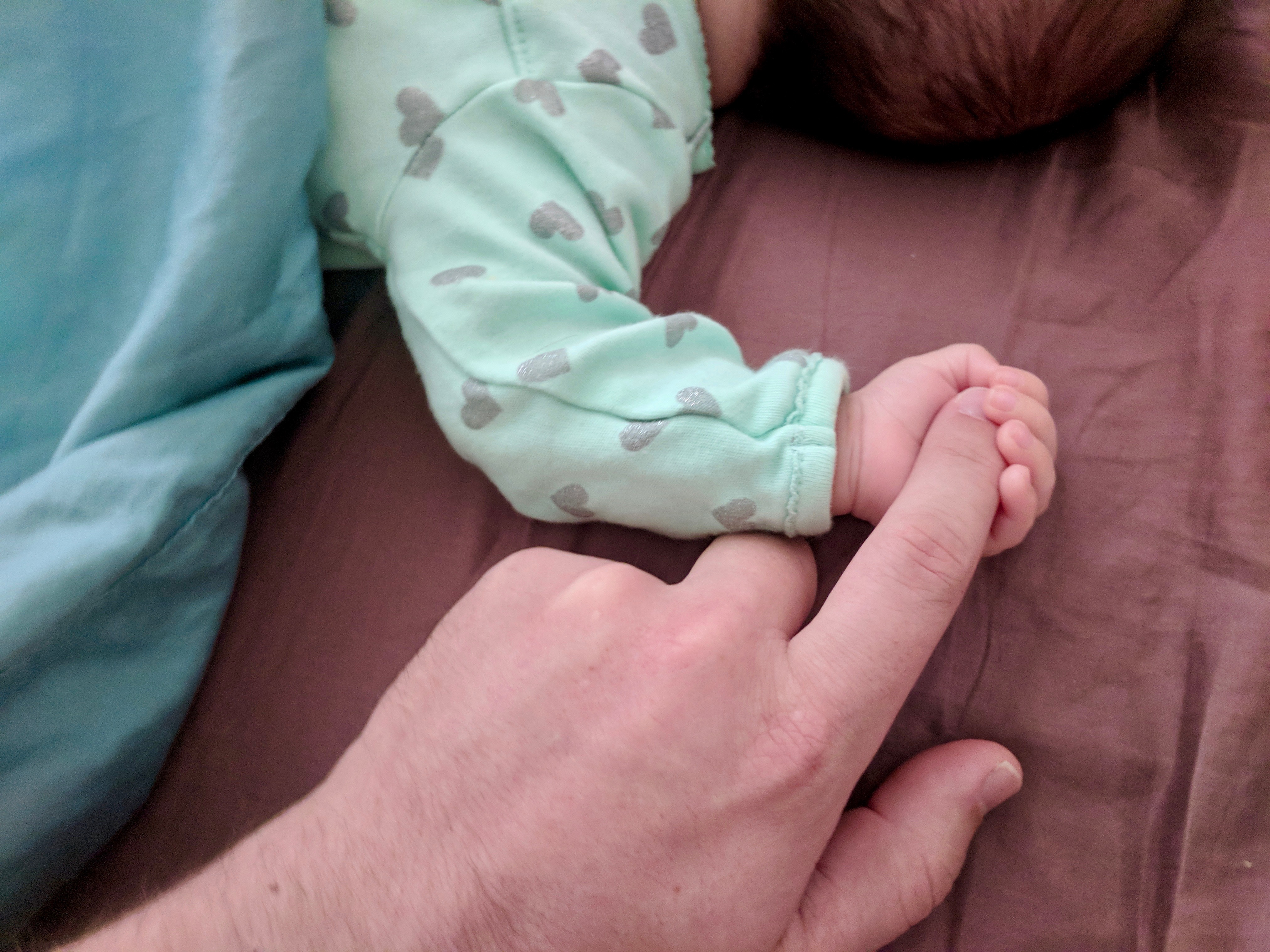 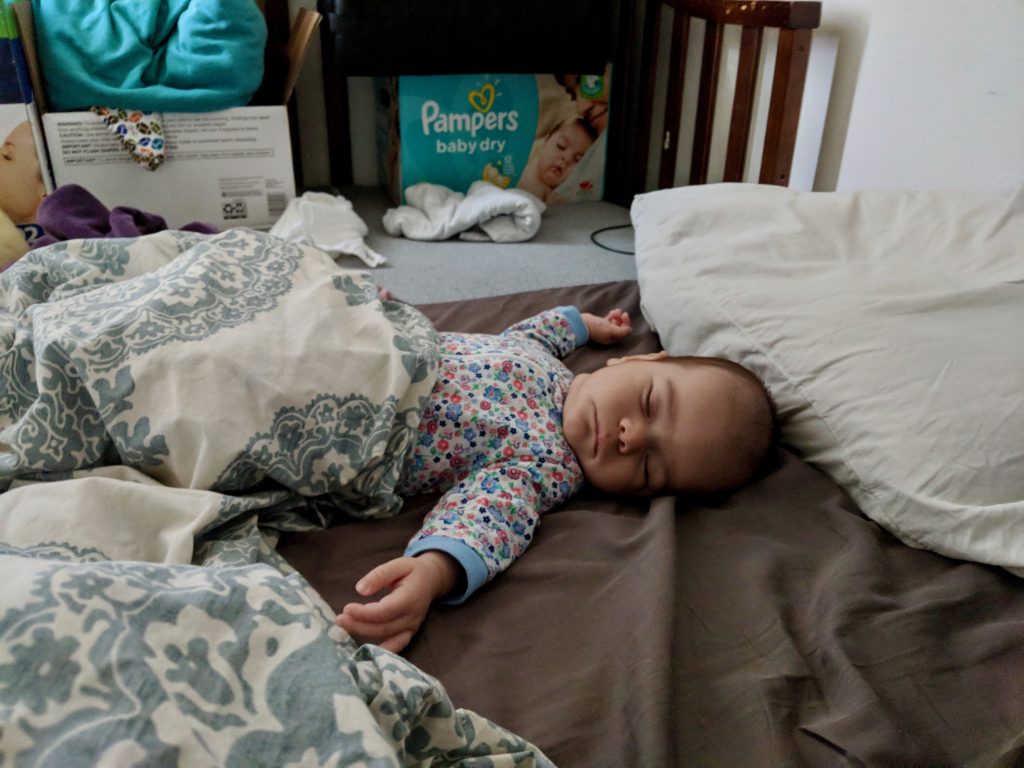 Those were the days

With a more predictable routine, we were also better able to observe patterns that occurred. For example, we noticed that Storm becomes very restless in the early morning hours. Sometime between 5-7am, he starts tossing and turning (which in infant means flailing arms and legs and turning his head from side to side), and sometimes this leads to full blown crying. We figured out that it might be wind, and we have had some success with burping him, or waking him up so that he can poop. But sometimes nothing works, and then we just all get up and enjoy an early start to the day. Although it sucks to loose any of those already preciously few hours of sleep we are getting, those mornings usually mean that Paulus and I get to have a nice breakfast together, which is an increasingly rare instance of something that used to be central to our togetherness.

And around week 7, we made acquaintance with the ‘witching hour’. One day, out of the blue, Storm just started crying in the evening, for no apparent reason, and nothing we did could console him. So for about 1.5-2 weeks, this would happen every day, starting between 5 and 7 pm, and lasting pretty much until bedtime. We attributed this to the advent of a ‘wonder week‘, and it was greatly helpful to me to know that it was probably a passing phase. Sure enough, as suddenly as the evening crying spell had appeared, it went away again. And left us with a son who was much more attentive and ‘awake’.

Now, he is able to focus on our faces for longer stretches of time, and he seems much more capable of attending to things and objects in general. And that seems to have brought with it the most precious thing – his baby smile. At first, beginning around week 7 he would smile with his eyes and just sort of lift the corners of his mouth, but now he is capable of the most adorable open-mouthed smile, that makes it look like he is on the cusp of letting out a hearty laugh. It’s the most amazing thing. Paulus and I get the odd smile, but the starfish mobile is smiled at regularly: Every morning when I take Storm to the changing table, it takes him a moment to orient himself. And then he notices the starfish. First he looks at it for a while, following it with his eyes if I’ve made it swing. Then he turns his head, and shyly looks at it out of the corner of his eye, before flashing it his best smile, like he cannot believe his old friend is here after being absent all night. I makes my morning every time. The video here was taken just before the ‘wonder week’, and his smiling has magnified since then.

As for other development, we saw some more cool things happen during the past month. Storm got really good at lifting his head during tummy time, and by week 7 his neck was strong and controlled enough that he could turn his head from side to side.

He also slowly started discovering his hands. Mostly he sucks on them – the knuckle of the thumb and the surrounding area appears to be a favorite. Sucking on his hands when they accidentally got in range started around week 6 or 7, and has remained mostly unintentional. But what he lacks in manual exploration, he is makes up for with sucking and licking on everything that comes within range. Blankets, sheets, and the straps of the Ergo carrier are current favorites. We have also noticed the beginnings of cooing.

Paulus and I have become more confident in going places with Storm. During the past weeks, Storm has had his first visit to the beach, to Target, to campus, to a few restaurants, and to the DMV parking lot. 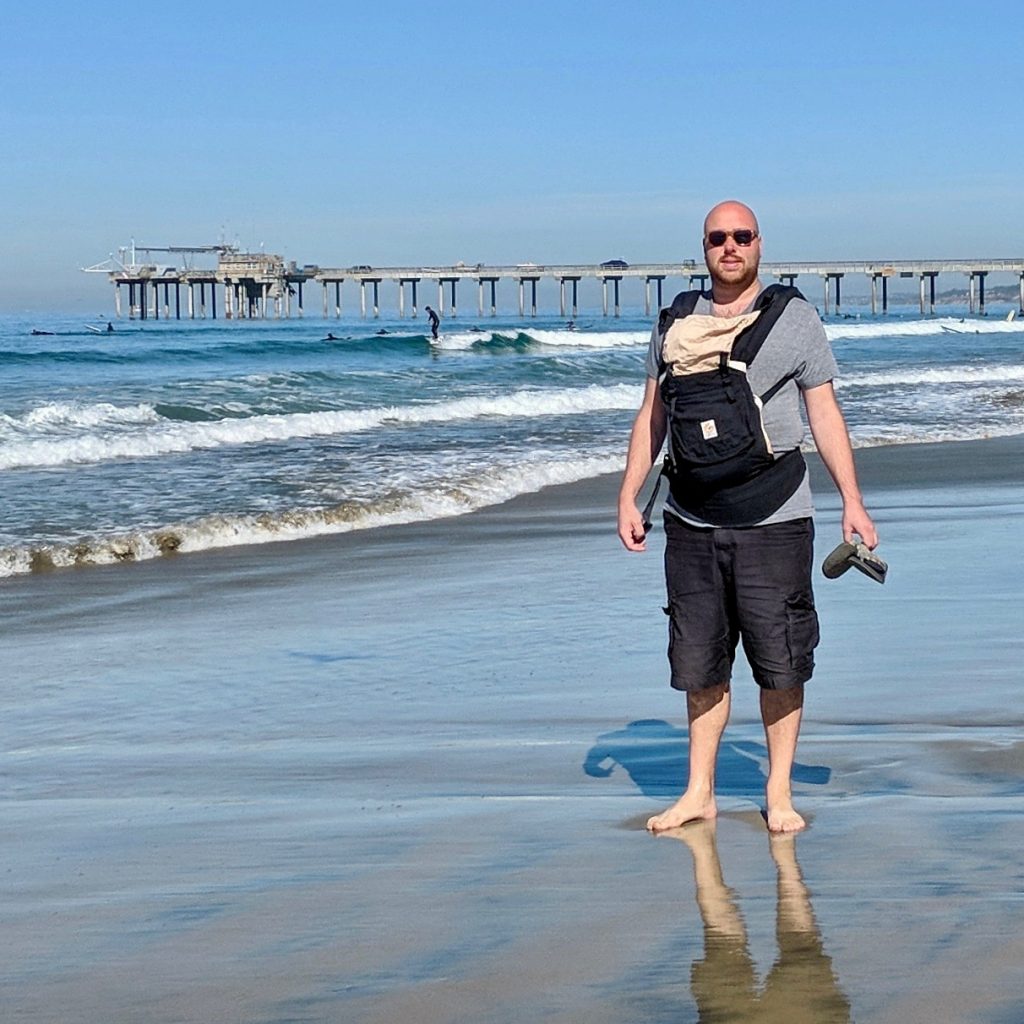 First time at the beach 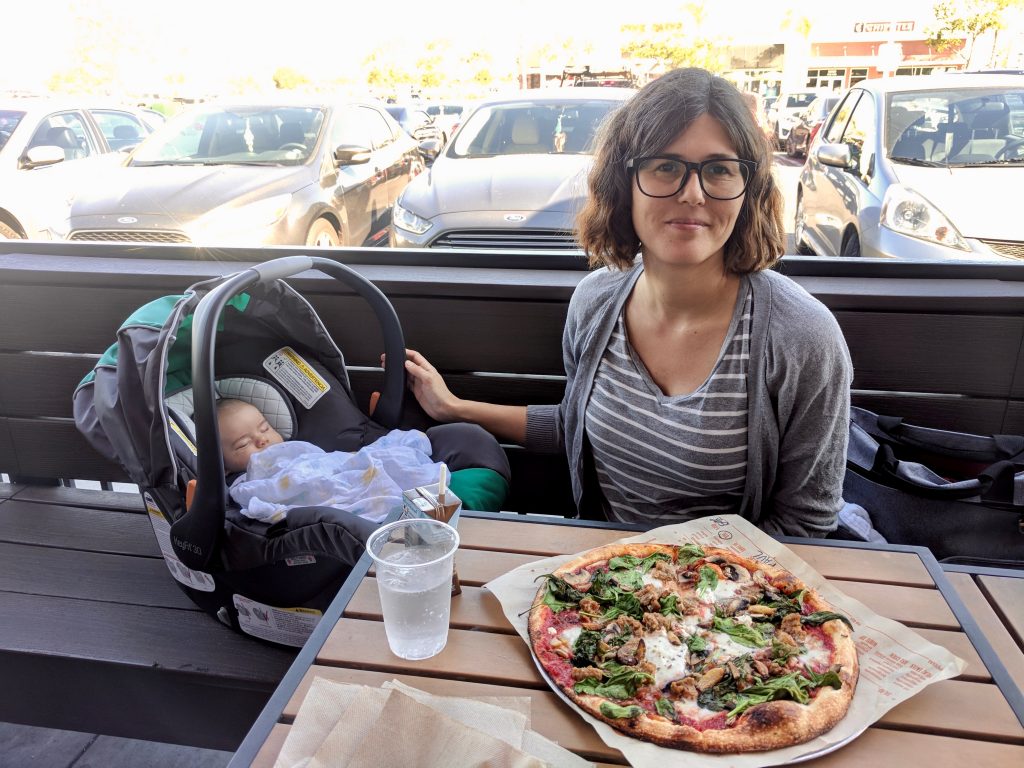 Mostly these outings have gone well. Storm isn’t a big fan of the car, though. Like many babies, he’s fine as long as the car is moving, but traffic lights and traffic jams are positively evil. There was that time when went to the Danish Consulate to apply for a passport for Storm. Driving home from there, we got stuck in evening rush-hour traffic. Storm, who had been asleep in his seat until then, woke up and cried till he was purple. When he does that, it never fails to make me cry, too, but usually we can get home pretty fast when that happens, and get him out of the seat. This time, though, we were well and truly stuck in traffic with our crying boy despite being no more than 10 minutes walk from home. He cried so hard that I got scared he would cry himself completely out of breath. Eventually, at a red light, I jumped out of the car, snatched the stroller from the trunk, unfolded it on the sidewalk, then wrenched open the door to the back seat, grabbed the car seat with Storm in it, and got him positioned in the stroller. He calmed down as soon as he got out, so we were able to walk in the direction of home for a good five minutes. When he started crying again, I decided he had endured enough, so I wrapped him in his blanket and sat down by the side of the road to nurse him. Paulus and I agreed after that that there would be no more rush hour traffic for us for a while. 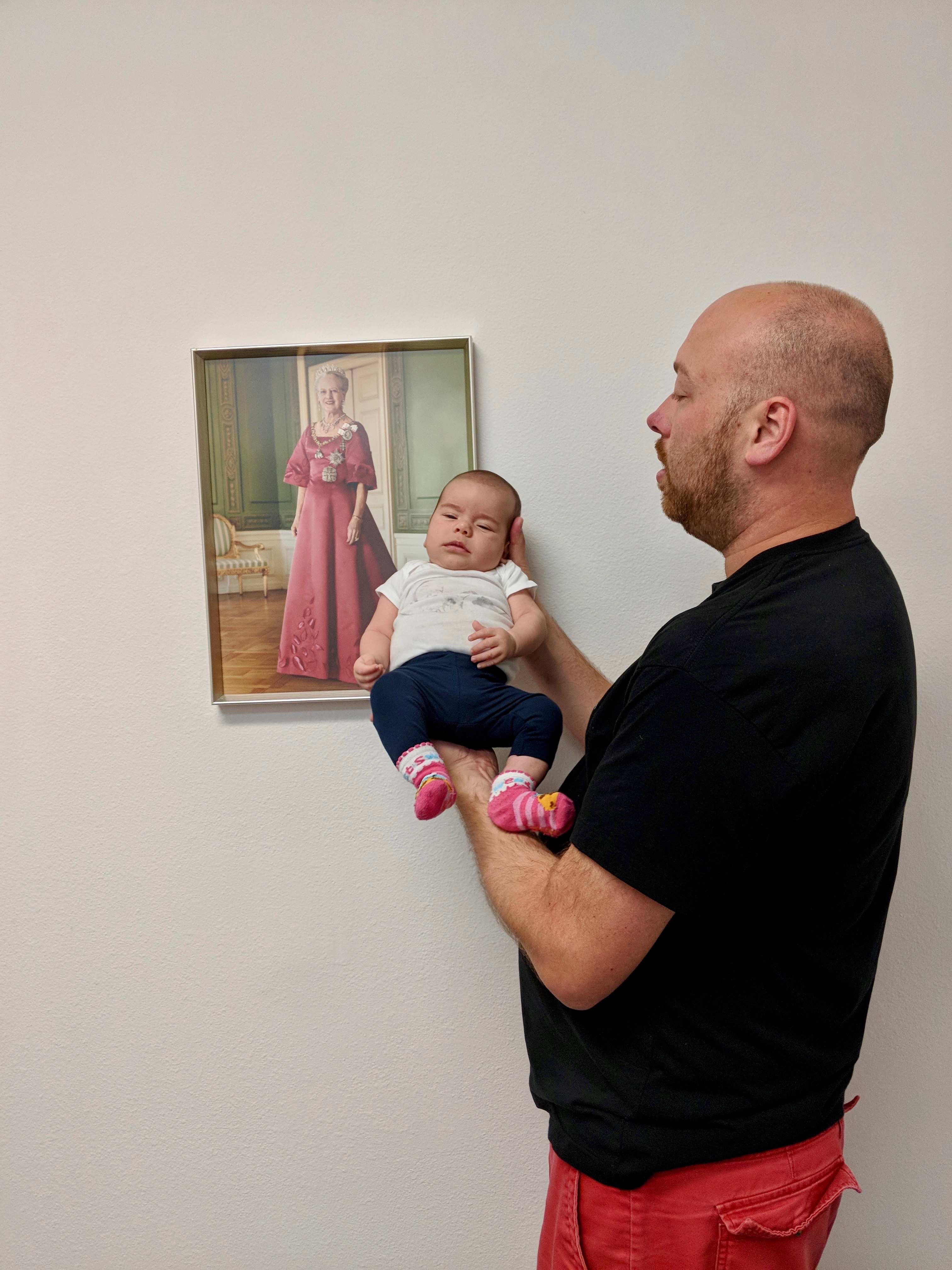 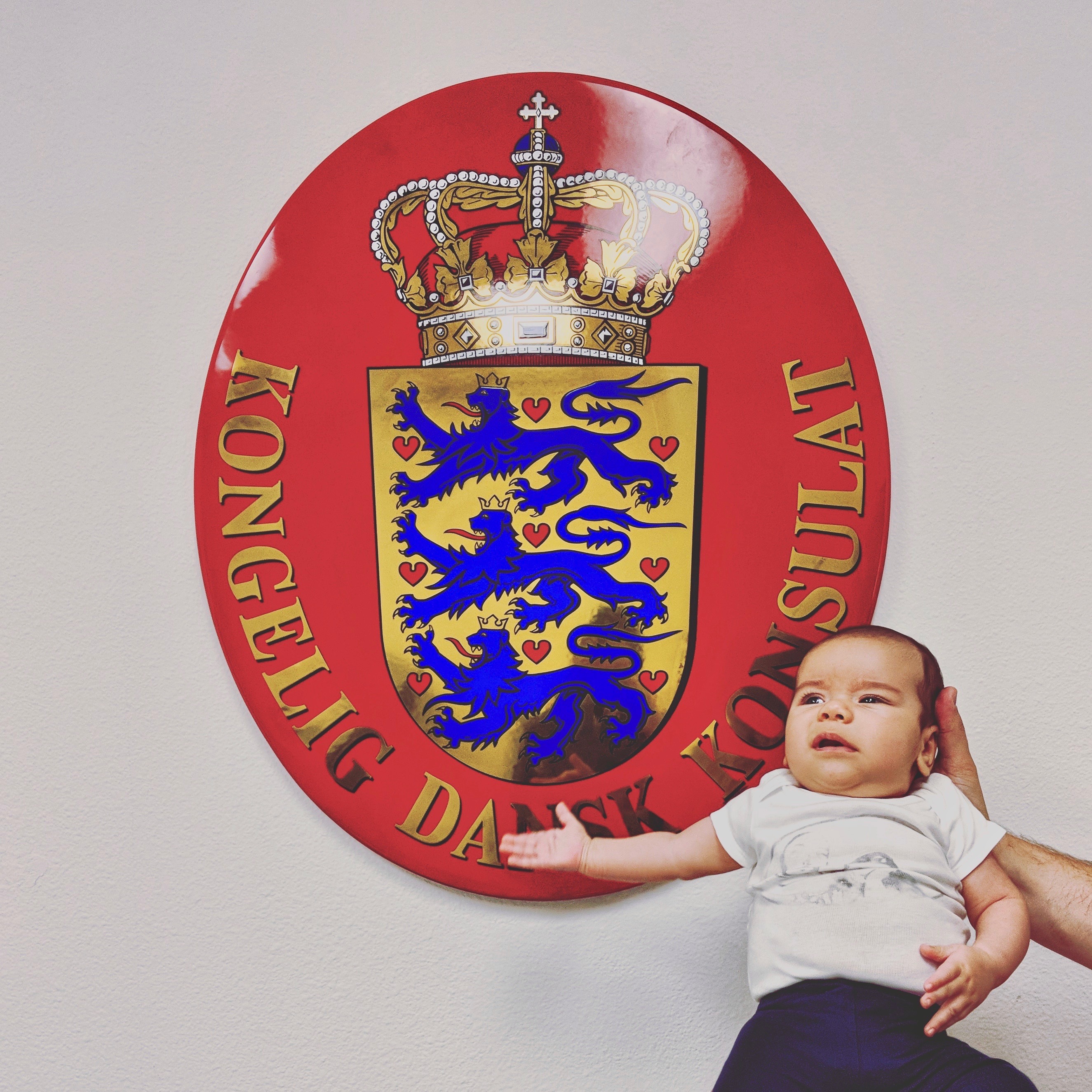 At the Consulate, before the Incident

And that’s it for now, folks, but assuming that Storm keeps growing, we’ll be back with a 3 month update in a few weeks. I’ll leave you with a small selection of Storm’s awesome outfits. 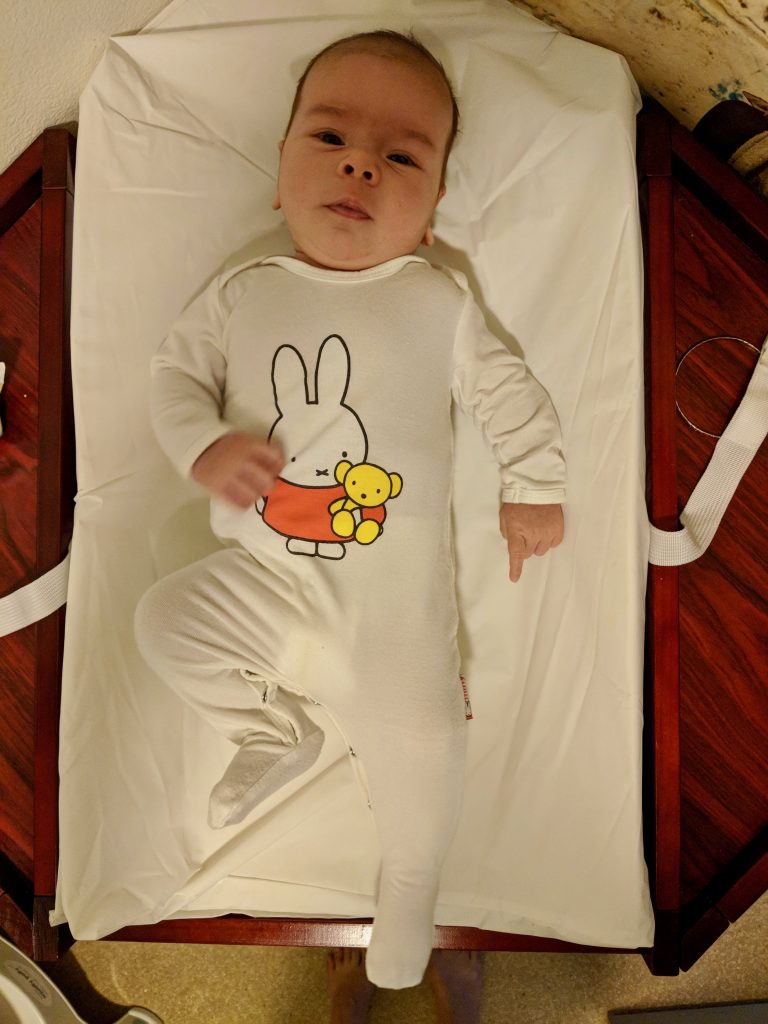 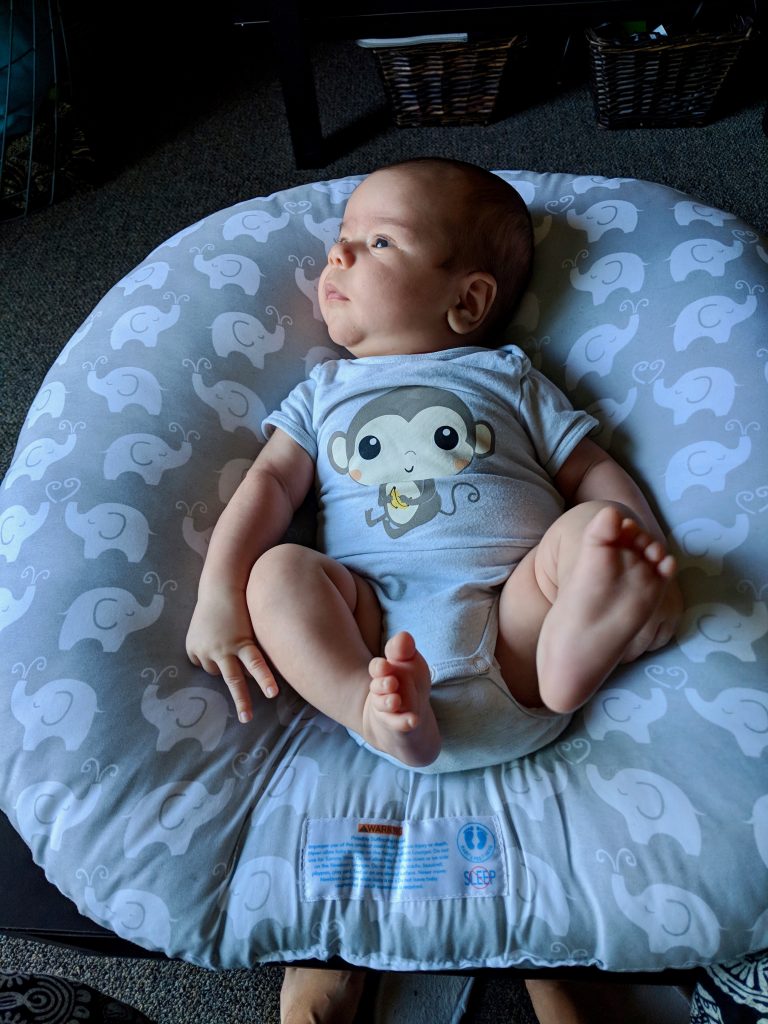 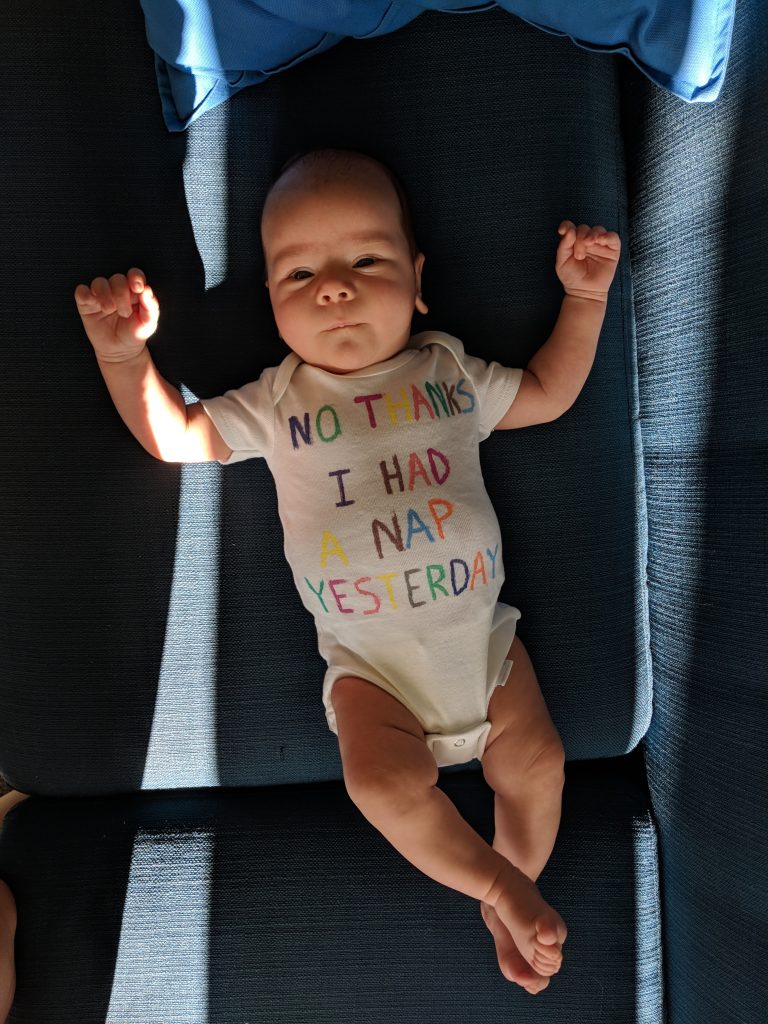 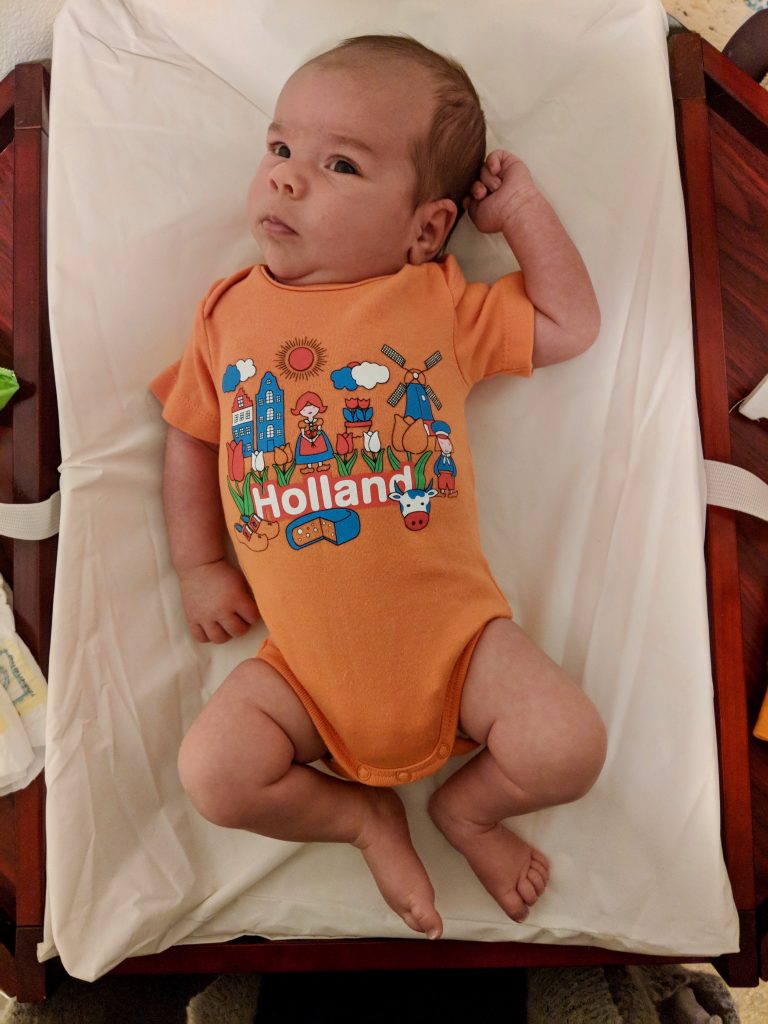 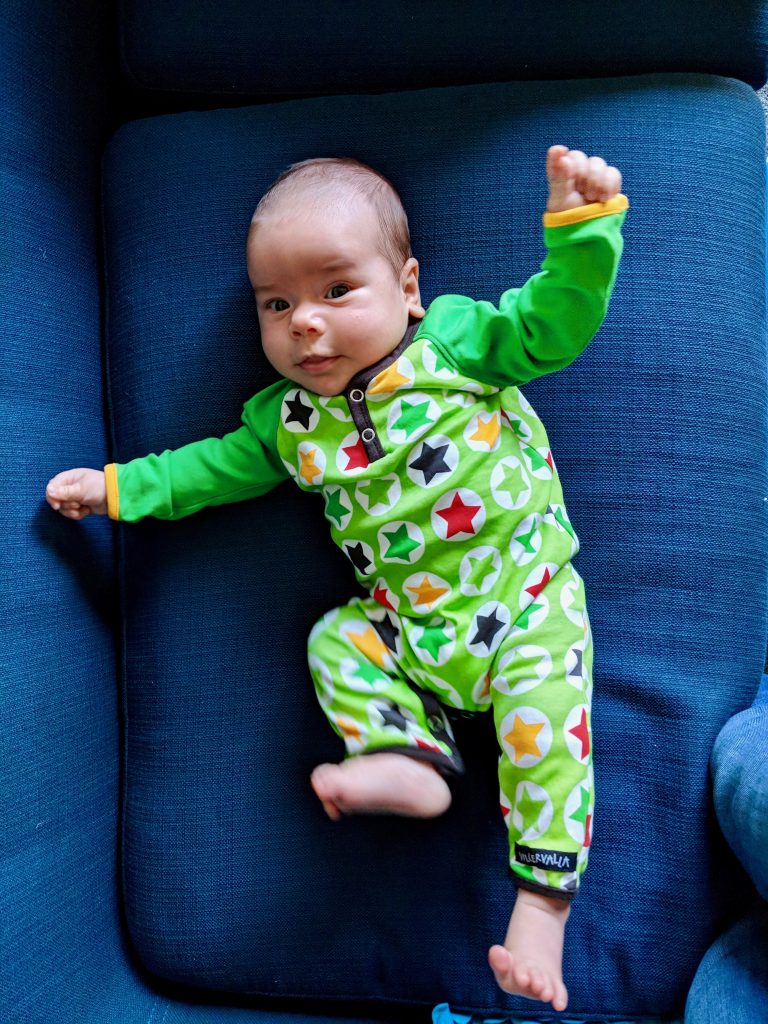 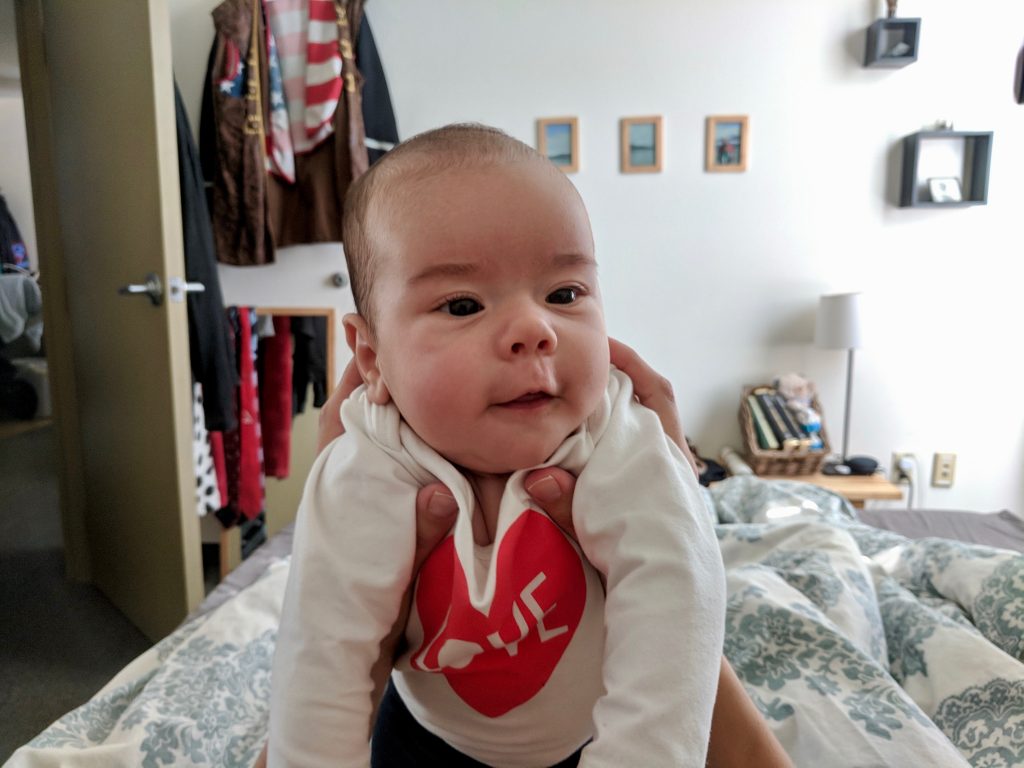 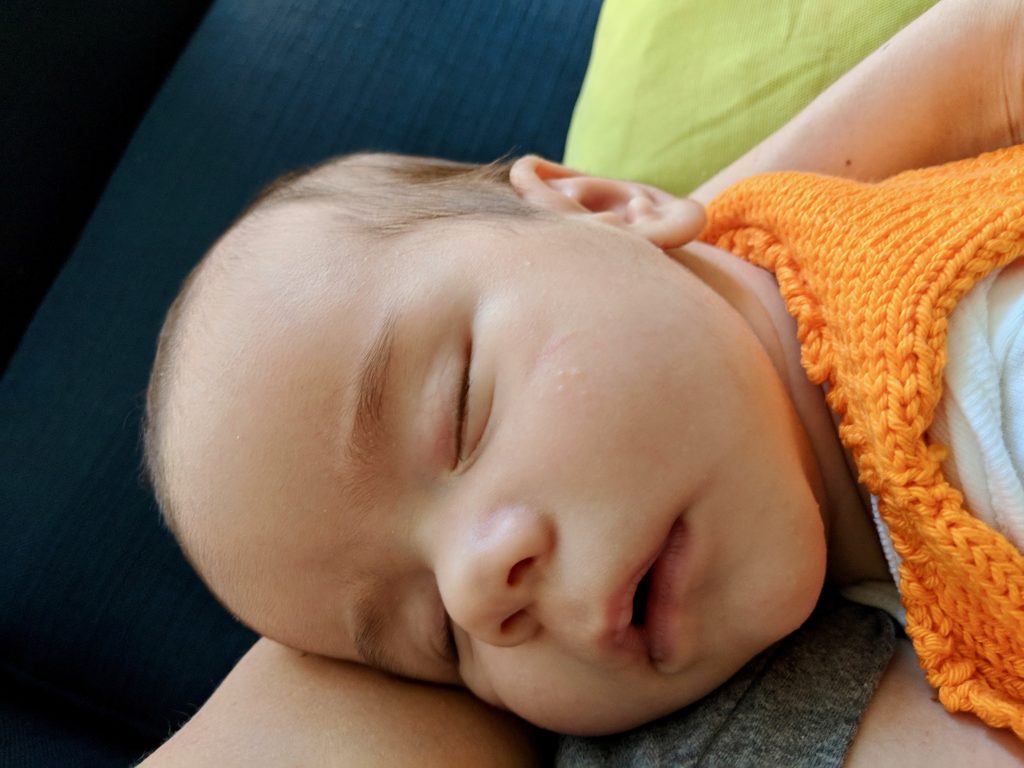 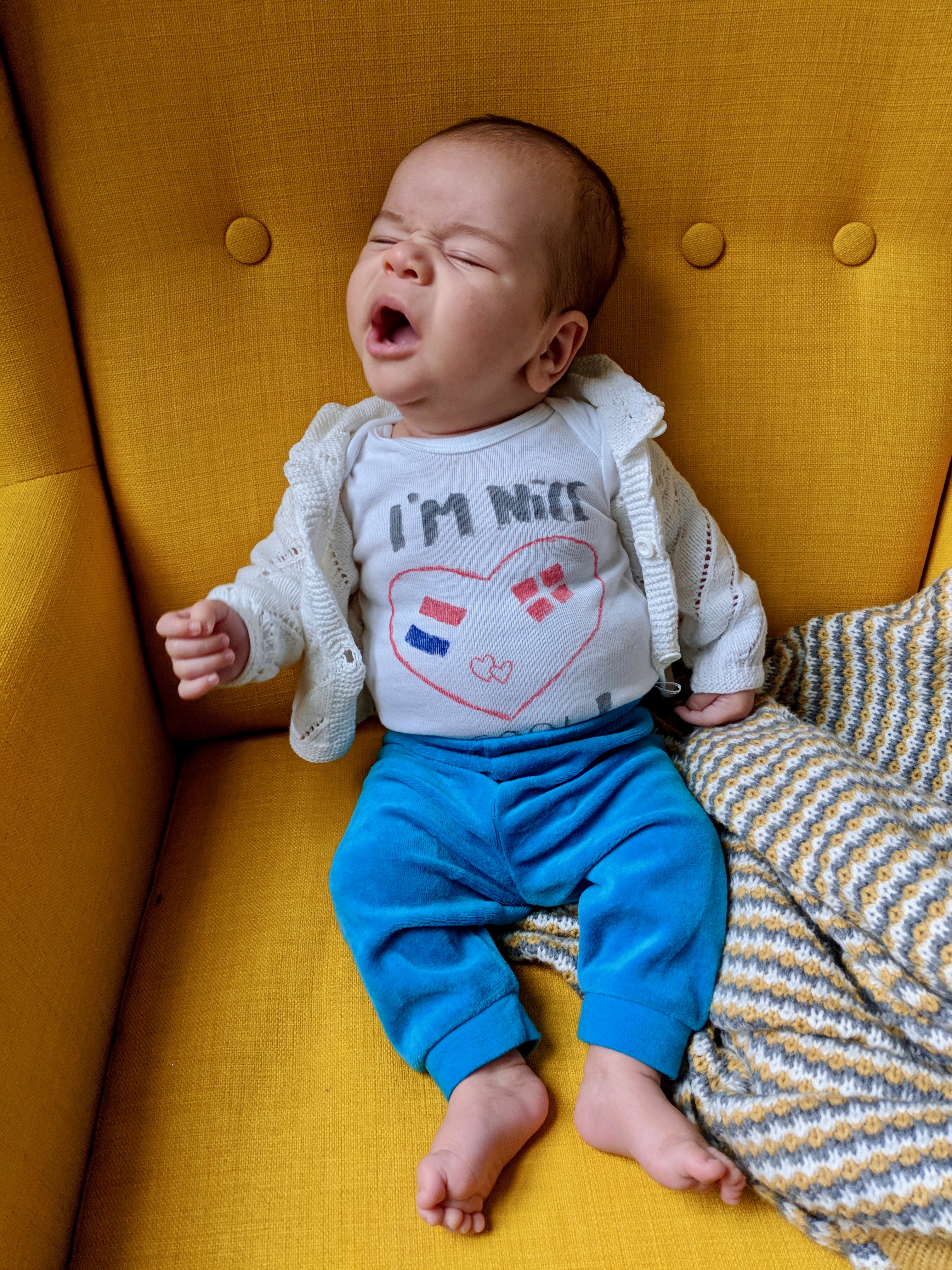 Getting dressed is tiring