[This post was written at the beginning of April]

I’m currently almost 35 weeks pregnant. Today, I finished a major deadline at work, and that has freed up mental space to properly acknowledge that my due date has crept very very near while we were busy with other things. We are going to have a newborn in the house again very soon.

In hindsight, now is not the best time to be pregnant or to have a newborn. The COVID-19 pandemic is raging, we’re all stuck at home, and hospitals and midwives’ offices are among the places you’d rather not be right now. It remains uncertain whether a mother can transfer the virus to an unborn baby, and they are still trying to figure out how hard COVID-19 hits newborns. All in all, not great.

We had planned for a home birth before all this happened, so we are not expecting to go to the hospital for the birth. But if I were to contract the virus, we would have to. My biggest fear is being separated from the newborn after birth, which seems to be routinely recommended at the moment if the mother has or is suspected of having COVID-19. So we are taking physical distancing very seriously – think washing the groceries and stepping off the sidewalk to maintain distance to others when we do go outside. Luckily, I’m an introvert and Paulus was already working from home, so the change to ‘stay-at-home’ has not been too drastic for us.

I wrote in a previous post about how I was nauseous during the entire first trimester and well into the second. At some point during the winter holidays, I started feeling much better, and when we came back from our travels to Europe in January, I was ready to get back to work in full force. I enjoyed being able to focus on work during the second trimester.

Of course, we also had things to do at home. In preparation for the new baby, we bought Storm a toddler bed. He slept in it – rather reluctantly – for about a week, and then he made it clear that this was not for him. So we converted it to a floor bed and bought another mattress so we would be comfortable laying down with him when he’s falling asleep. This has worked better than the actual toddler bed, but it is still a work in progress. When Storm sleeps in our bed, he more or less sleeps though the night. But when he’s alone in the little bed, he wakes at least once and needs somebody to come reassure him and sometimes to lay next to him for a little while. That’s all fine, except for two things. First, I am now so very pregnant that getting in and out of even our raised bed is cumbersome, and I am uncomfortable lying down under the best of conditions, so night wakings tend to fall mostly on Paulus. Except that he is a much heavier sleeper than I am, so we both generally wake up several times a night. Not ideal. Second, we worry about how a newborn in the room will affect Storm’s sleep. Our big bed is not big enough to accommodate everyone, even with the baby’s crib side-cared to one side. Well, these kinds of things tend to sort themselves out somehow when the time comes.

We also ramped up our focus on toilet learning. Since we were mostly housebound anyway, we figured it was a good time to ditch the diapers. That is still an ongoing process, so more about that another time. We also spent time preparing Storm for the new family member. We talked about what we should call the baby. Since we don’t know the sex of the baby, we still have several options on the table, and also several non-options that somebody is still clinging to… We also sang songs for the belly, and Storm very much enjoyed blowing raspberries on it. With a bigger belly, we have had to make many adjustments to our daily routine – like carefully keeping track of how far away from home we are walking, because I can only carry Storm so far -, but I expect these changes are just the beginning of becoming a family of four.

Just like when I was pregnant with Storm, the second part of the pregnancy was generally an enjoyable time with lots of energy. Before COVID-19, we made the best of this time by getting outside a lot, walking and biking, and meeting with friends.

And now, we just wait. At home. 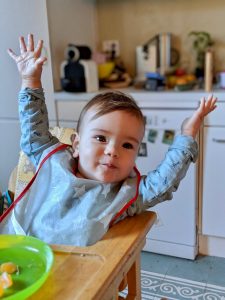