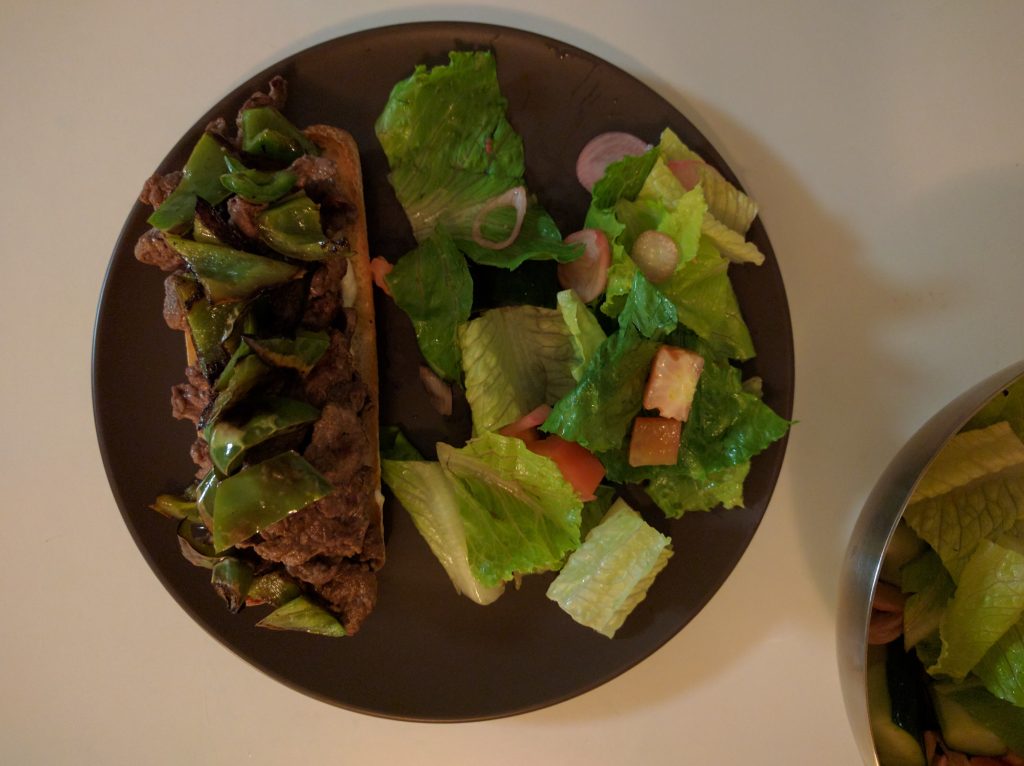 Today’s post is a first, as it is not primarily about something I cooked, but rather about something Paulus cooked, and about our general experience with one of these newfangled ingredient delivery services.

The podcasts I’ve been listening to recently have Blue Apron as one of their sponsors. Blue Apron is one of these services that develops recipes and delivers them, and the ingredients needed to cook them, to your home. Because Paulus is not a fan of deciding what to cook, I thought we might give Blue Apron a try. For someone like me who likes to cook and doesn’t struggle to find inspiration, it seemed a bit pricy to pay close to $10 per person per meal for the convenience of having the ingredients for a recipe pre-decided and pre-measured. But since they gave a few meals for free as a promo offer, and they have free shipping, I decided that it would be worth a try.

We received our package on Friday afternoon, and in the evening Paulus picked the beef and peppers open faced sandwiches as his choice for the night’s dinner. While I was happily using the extra time to catch up on things written on the internet, Paulus got busy in the kitchen.

The recipe was listed as having a prep time of 30-40 minutes, so after around that much time, I started listening for the sound of the table being set, as this is a good indicator that eating is imminent. But I listened in vain. I think Paulus was cooking for somewhere between 75-90 minutes, to his great frustration. He usually cooks pasta and tomato sauce, which probably takes closer to 20 minutes to cook.

By the time dinner was ready, we were sooo hungry. But I have to say the meal was very good. It was a toasted baguette with garlic aioli, beef strips and Anaheim pepper. It went with a salad of romaine, tomato, cucumber and marinated shallots (I think this is the first time in our relationship that Paulus has made a salad. My mother-in-law won’t believe her own eyes when she reads this). 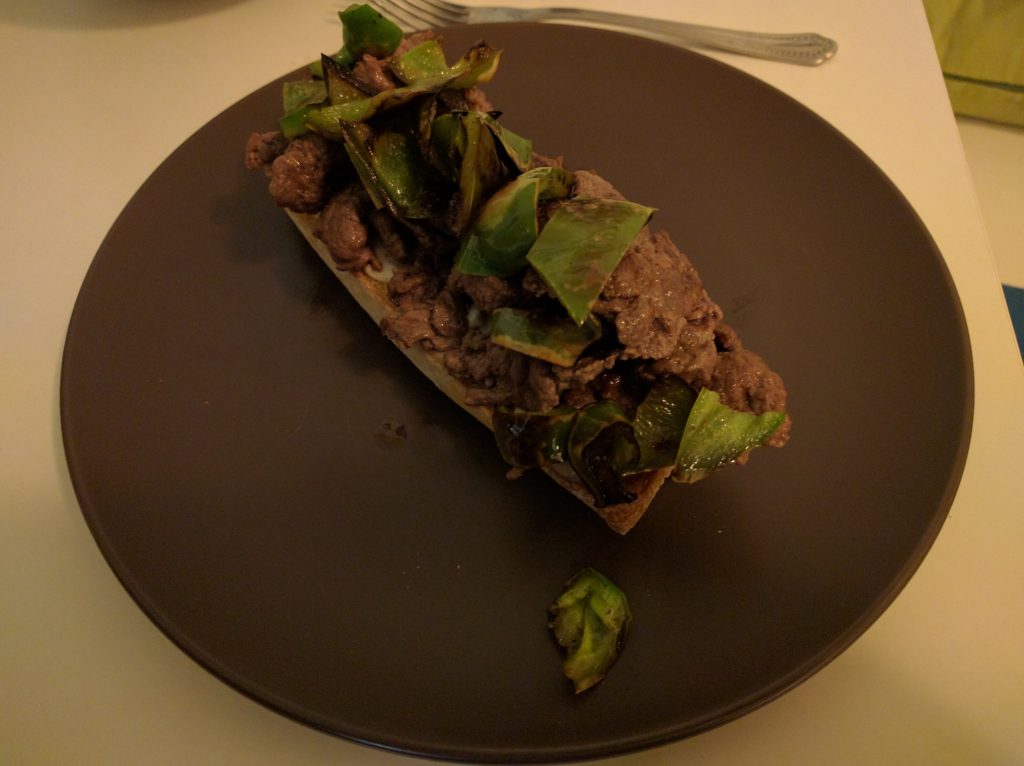 Anyway, I really liked the meal, and I may or may not have been looking forward to the prospect of my husband making more nutritionally balanced dinners in the future. Alas, if I was indeed hoping for more salads-to-come, that hope was crushed almost immediately with Paulus’ proclamation that he was not going to go through this again. It was clearly a traumatizing experience for him to be in the kitchen for over an hour! I wonder what he thinks I do in there for hours at a time…

Be that as it may, after this dinner, I was convinced that we would have to cancel our Blue Apron subscription  (after I cooked the other two dinners from the same delivery myself, tsk).

However, a few days after this spectacle, Paulus volunteered to cook again. This was unexpected. Was he getting inspired? Was this the dawning of a new era? Or was I having a bad day and he wanted to cheer me up by making dinner?

Whatever the reason, he tackled the second blue apron meal, crispy catfish. This time, we kept an eye on the clock. This preparation was supposed to take between 45-55 minutes. It turned out that 55 minutes was right on the money. Just under that magic hour mark! In that time, Paulus cooked farro, prepared the produce, sauteed kale, fried rosemary, and made a warm grape relish. He also breaded and fried catfish fillets and plated the food.

The fruits of his labor: 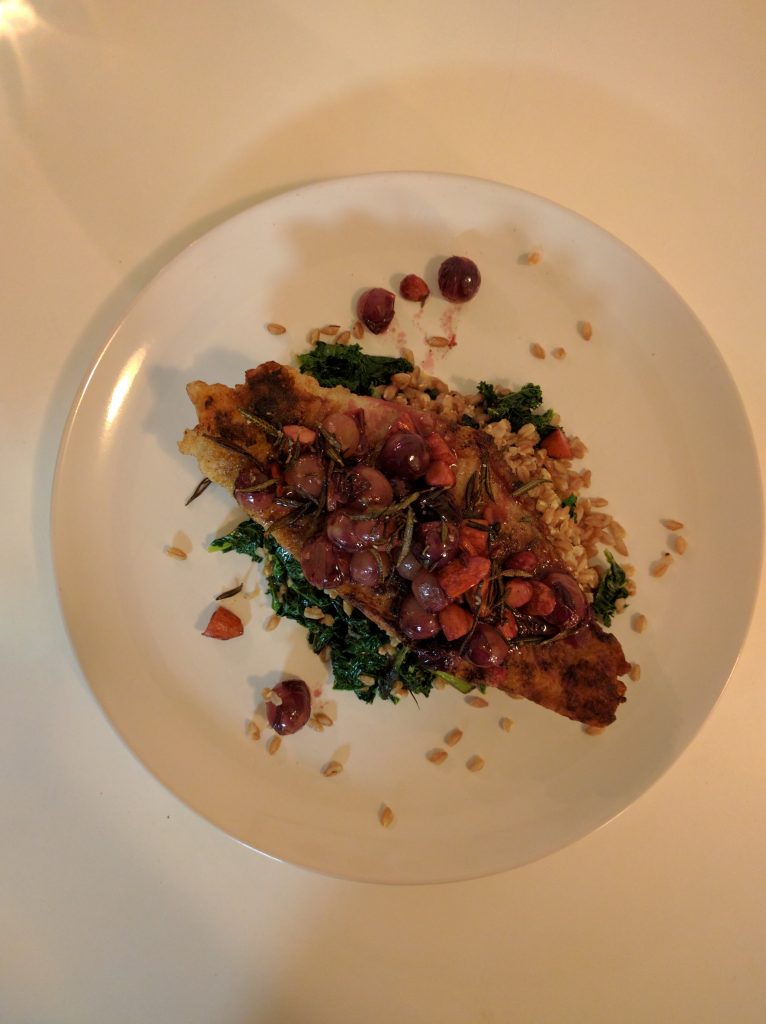 This plate looked so good, and I was very excited to eat it. I had the task of pouring us some white wine (which I may or may not have been tasting while observing the activities in the kitchen). That went well, too. But this accomplishment paled compared to Paulus’ creation. 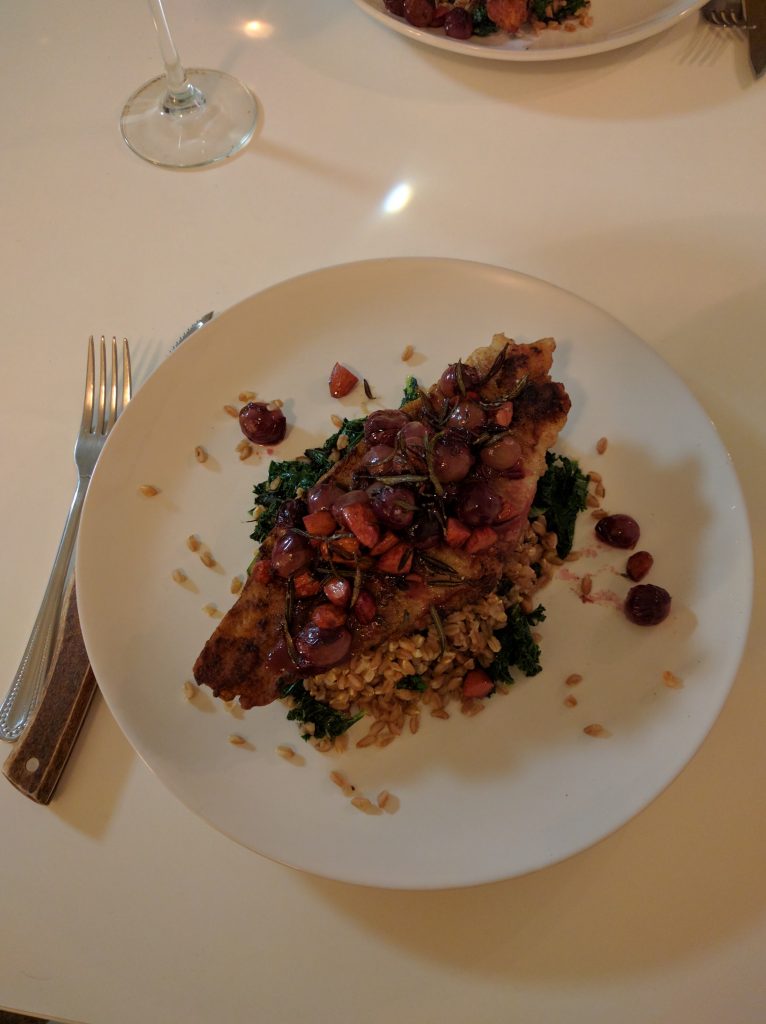 This dish was. just. perfect. The kale and farro made the perfect bed for the crispy fish. It was so good that I ate that entire piece of fish by myself (this never happens, I’m scared of fish). I was also very fond of the fried rosemary on top, just lightly salted. But the grape relish stole the show. It was sweet and lemony tangy and crispy from the almonds. I must make that again. So good. 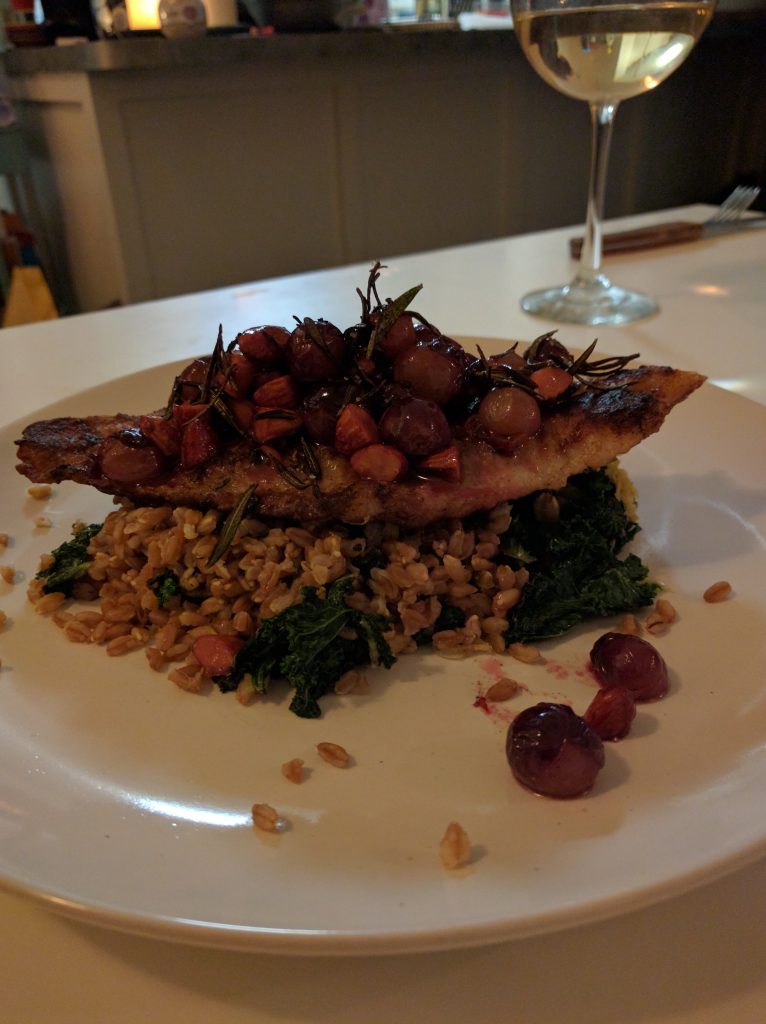 And then there was appreciating and uuhmm-ing and talking with mouths full, and candle light and hand-holding and gazing at each other, because this week-night magically turned into date-night, and I’m still floating on clouds thinking about it.

The final meal in our blue apron delivery was a five spice chicken breast with fennel, collard greens and mushrooms. 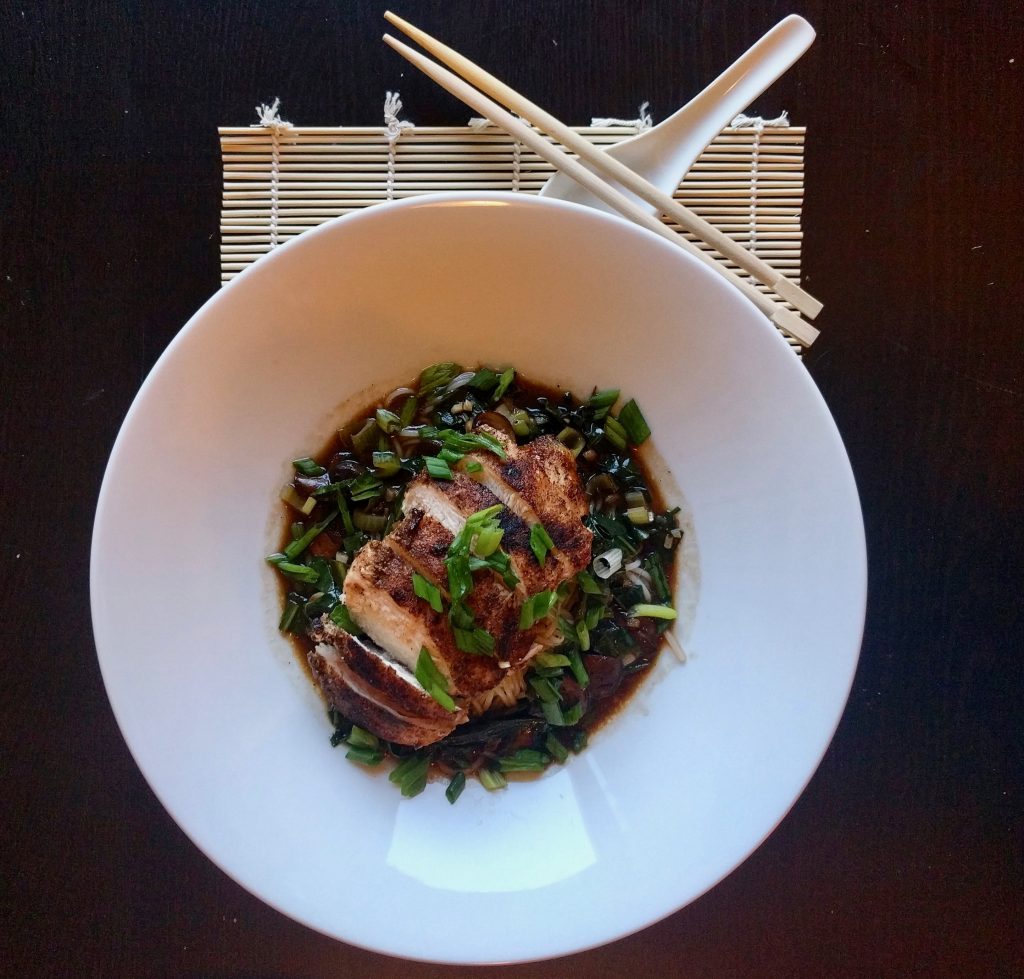 This one was produced by me. I estimate that it took a little over an hour to cook. The chicken was juicy and five spicy, and the noodles slurp-able. 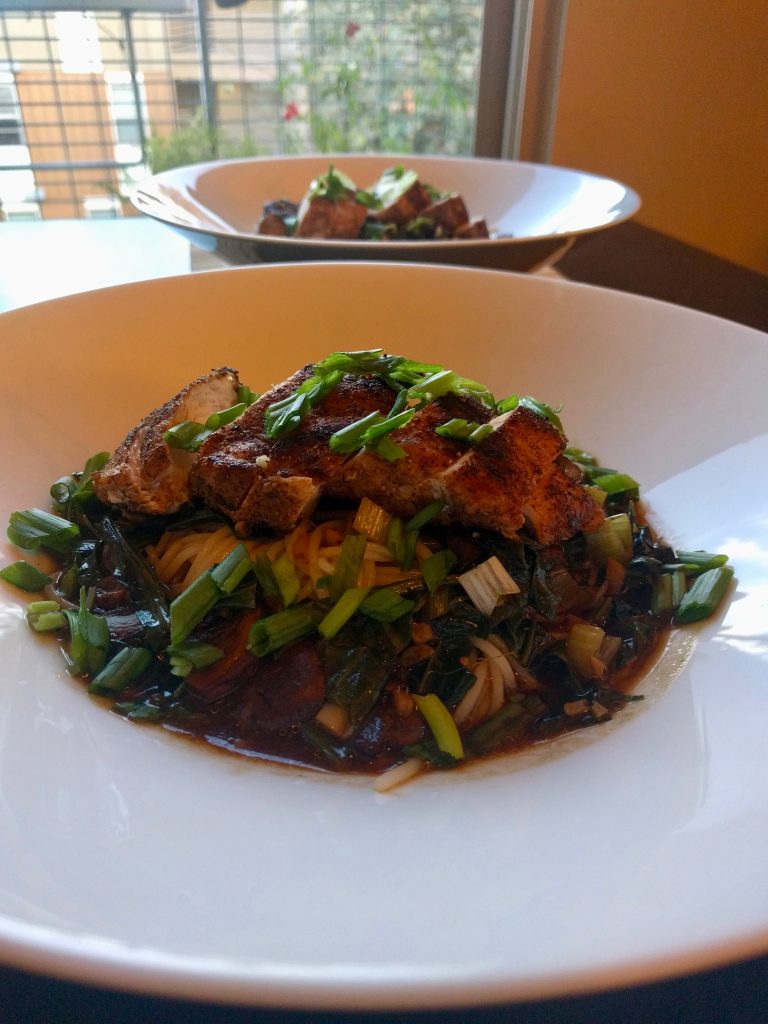 It was all in all a good meal, but nothing stood out and made it pop tastewise, so it’s not a particularly memorable dish. 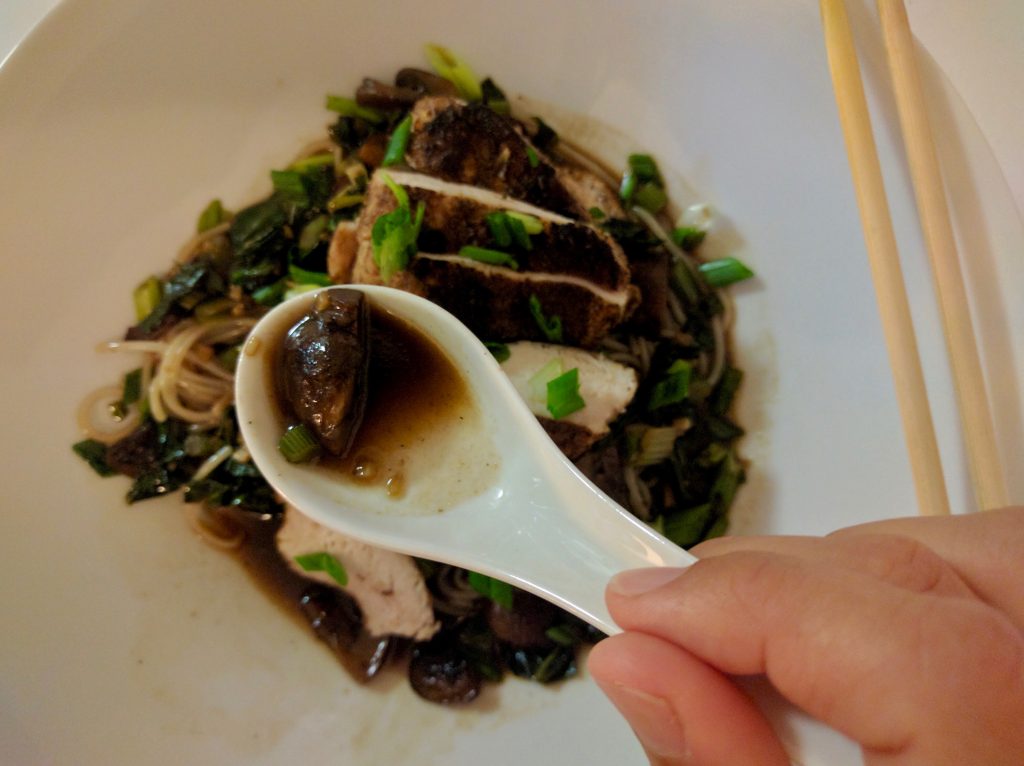 So what’s the conclusion on our Blue Apron experience?

We got some tasty food from different cuisines, which I liked. And the recipes are really easy to follow, and of course, they send you all the ingredients already measured out, so that takes a lot of the potential hassle of meal planning away. I think my favorite thing about the experience was that you can learn different cooking techniques and how to approach different ingredients from following the recipes.

For myself, though, I would say that even though I enjoyed the food, I find it unnecessary to pay extra for other people to take over the creative part of cooking, which is what I enjoy the most. However, if you’re someone who hates shopping and deciding what to cook, or you’re interested in expanding your cooking repertoire, I think an ingredient delivery service could be a nice thing to try out. If you can afford it.

In our case, Blue Apron deliveries are not going to be a regular thing. But perhaps a sporadic one. 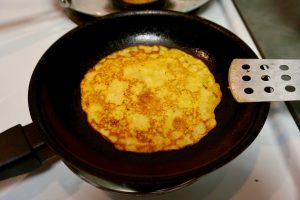 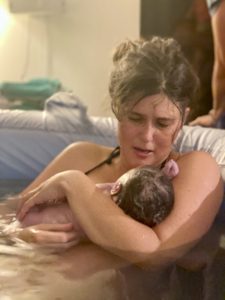